The museum is holding an online program to spotlight the new exhibit and commemorate National Gun Violence Survivors Week.

The National Building Museum may be closed but that isn’t stopping the museum from introducing its latest exhibit. On February 2, 2021, the museum will conduct a special online program to introduce the Gun Violence Memorial Project. Opening to the public this year, the Gun Violence Memorial Project is a collection of glass block houses filled with mementos and tributes to people who died from gun violence. The display was designed by MASS Design Group and is the second installation in the project.

The memorial project was inspired by the NAMES Project AIDS Memorial Quilt, a giant quilt that traveled the nation and paid tribute to people lost in the AIDS virus pandemic. The memorial consists of four houses, each made with 700 bricks symbolizing the number of lives lost daily to gun violence. Clear bricks display memorials to those killed by gun violence and feature pictures, jewelry, baby shoes, and other mementos.

“Our goal was to communicate the enormity of the epidemic while also honoring the individuals whose lives have been taken," said Jha D. Williams of MASS Design Group. “The recognizable form of the wood lattice and glass houses are but the framework in which the more intimate narrative is shared; the memorial is the willingness of families to share personal artifacts and stories of their loved ones.”

Visitors to the museum can walk through the houses and view the bricks while learning about the people and families affected by gun violence. The exhibit will also broadcast video clips from an upcoming documentary “Comes the Light,” featuring families of the Gun Violence Memorial Project. 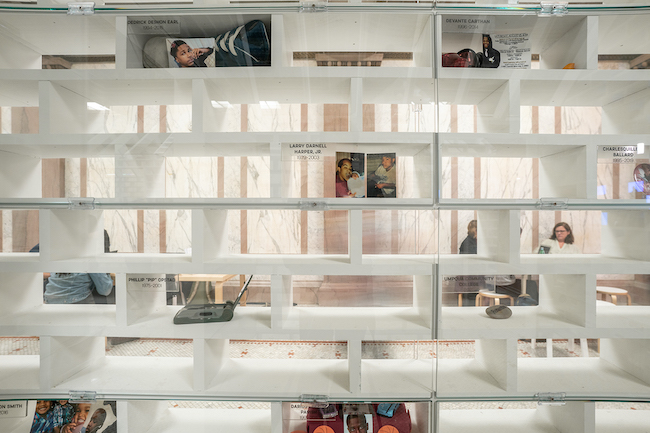 Ahead of the opening of the memorial at the museum, the National Building Museum is hosting a special webinar for National Gun Violence Survivors Week on February 2, 2021, at 6:30 p.m. (ET). The two-hour program will feature speakers from the design firm as well as families of victims featured in the Gun Violence Memorial Project. Visit this link to sign up for the webinar.

In addition to the webinar and exhibit at the National Building Museum, the public can visit an online version of the Gun Violence Memorial Project at Moments That Survive. Learn about 25 of the families featured in the project, and submit your own story of gun violence to the project.