The United States Naval Academy is not just a military institution; it’s a gorgeous place to visit, and it has some of the best water views in Annapolis.

The young men and women (midshipmen) preparing to become professional officers in the U.S. Navy and Marine Corps spend four years on this 338-acre campus, which is rich in tradition, history, elegant buildings, and beautifully manicured grounds known as the “Yard.”

The Naval Academy is one of my favorite places, as I was afforded the honor of having my wedding held in the Main Chapel due to my husband being an alumnus. I couldn’t have wished for a better venue. Below are just some of my favorite things to see: 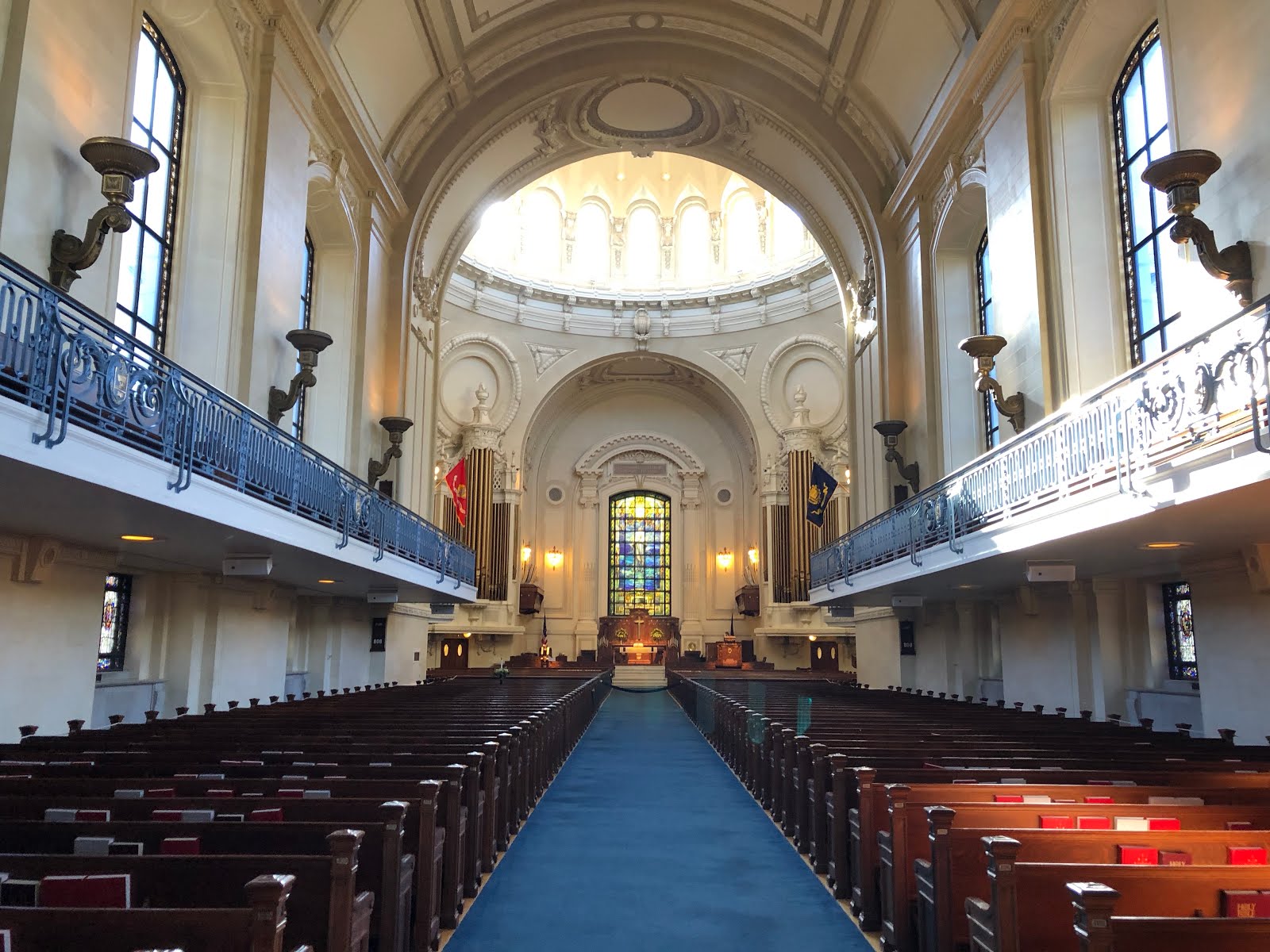 Built in 1908, the Main Chapel is an amazing architectural structure full of history, and it's open to the public (when weddings and other special events aren’t being held). If you really want to experience the Naval Academy culture, The Chapel’s Sunday services are also open to visitors.

While the iconic dome can be seen throughout Annapolis, wandering through this extraordinary building is amazing. You’ll see stunning stain-glass windows which depict tales of naval stories. There is also the main organ console, which is one of the largest in the world. The Main Chapel has a seating capacity of 2,500. On my wedding day, as I walked down that very long aisle toward the massive pulpit and my future husband, I was overwhelmed with happiness. The setting couldn't have been more perfect, with the organ playing, the afternoon light peeking through the windows of the dome, and our family and friends in attendance. It was one of the best days of my life. It is a beautiful and definite must-see while visiting the Academy. 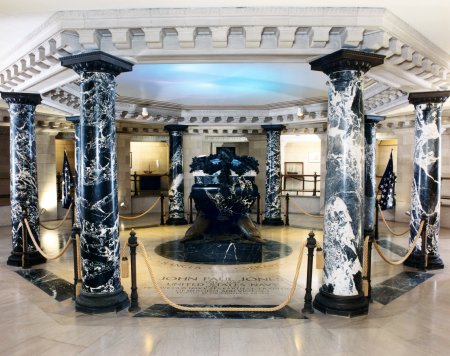 “I have not yet begun to fight!" is the famous response of John Paul Jones in reply to the British army’s demand for surrender during the American Revolution. Jones was laid to rest over a century after his death, in 1913, in a crypt located below the Main Chapel. In the crypt, you’ll find his 21-ton sarcophagus, which is supported by bronze dolphins and surrounded by black and white marble columns.

Also on exhibit are important historic objects such as the gold medal awarded by Congress in 1787 and his commission as captain, signed by John Hancock. This is an amazing opportunity to visit and learn about the "Father of the U.S. Navy."

Located in Bancroft Hall is the largest contiguous set of academic dorms in the United States. Over 4,000 midshipmen live in Bancroft Hall. It has over 1,700 rooms, almost five miles of corridors, and 33 acres of floor space. That is one heck of a dorm, eh? However, since most of Bancroft Hall is off-limits to the public, you can visit Memorial Hall, which is located within. 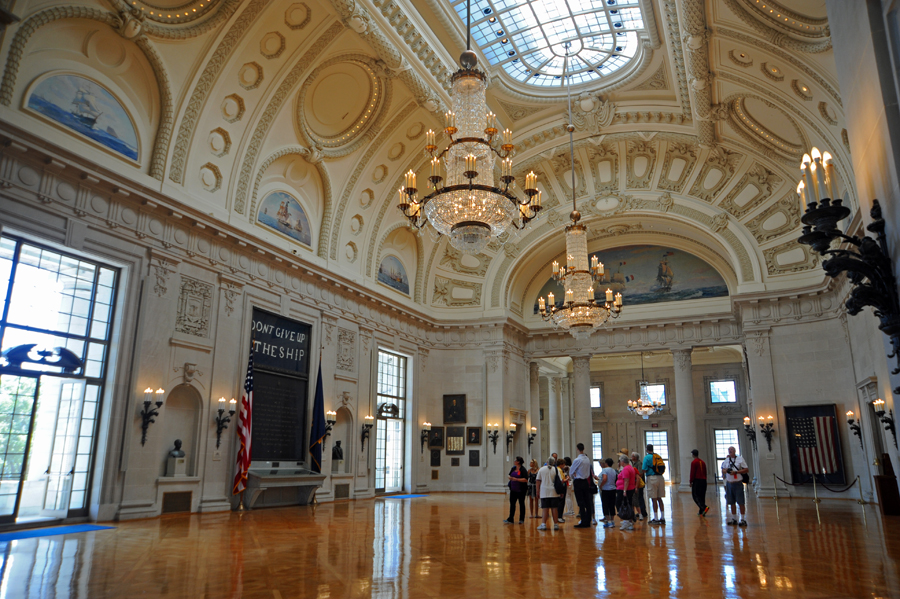 This Hall honors all Academy alumni lost in combat or military operations in service to our country. It is a magnificent hall, quite ornate, and is a fantastic backdrop for photographs. 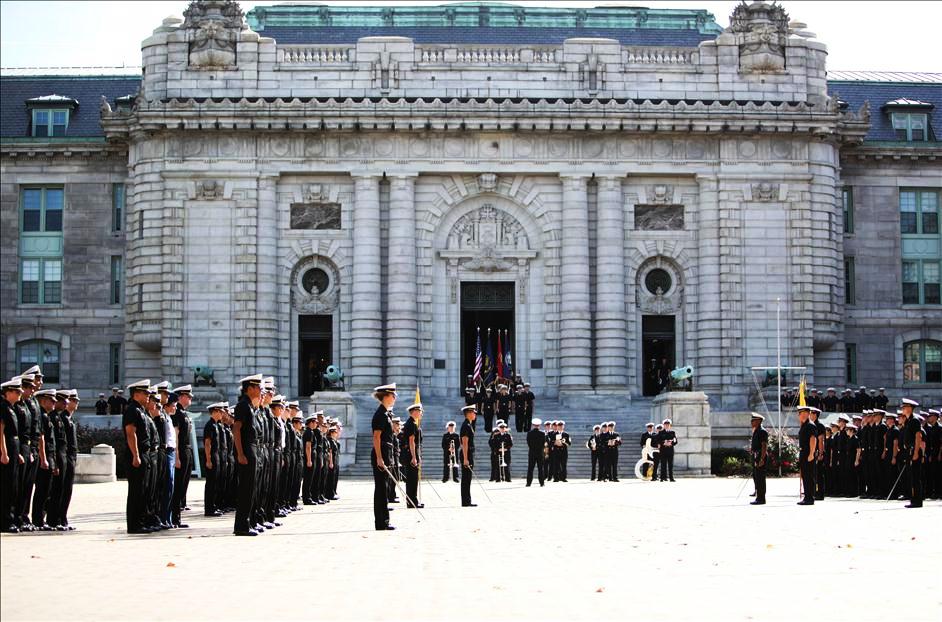 This is a splendid experience for visitors to observe. Every weekday at noon (weather permitting), the Brigade of more than 4,000 midshipmen assemble in Tecumseh Court outside of Bancroft Hall for roll call prior to lunch. They are dressed in their crisp uniforms and separated in their battalions. During roll call, one midshipman from each battalion calls out their battalion number and “all present and accounted for.” The Naval Academy band plays the Naval Academy’s fight song, “Anchors Aweigh” and the Marines' Hymn “The Halls of Montezuma” as the Brigade marches in perfect unison back into Bancroft Hall. The entire ceremony takes a little more than eight minutes. This demonstration always gives me goosebumps as it is so special. It is definitely my favorite.

The Triton Light is the navigational beacon which is located on the Academy’s seawall where the Severn River meets the waters of Spa Creek and the Annapolis City Harbor. The light is named for the submarine USS Triton and donated by the Class of 1945.

Upon the completion in 1960 of the USS Triton’s historic submerged global circumnavigation, the crew provided samples of water from the 22 seas through which it had passed. The structure contains a globe which holds this precious water.

The Triton Light is not only an important part of the culture and traditions of the Academy, but is also still a trusted navigational point in Annapolis Harbor with its flashing green light.

For more information on visitor entry requirements, tours, dining, the museum, and anything else for planning your trip, visit the Academy's visitor page.

If you’ve visited the Academy before, what are some of your favorite places and memories? Share them in the comments!