One of the oldest stone forts in America, Fort Frederick has played a role in three wars, including the French and Indian War.

Located in north-central Maryland, Fort Frederick State Park is home to one of the oldest military forts in the country. Built in 1756, the fort was first in service during the French and Indian War. It has two barrack buildings and is surrounded by a three-foot thick, 18-foot-high wall. During the American Revolutionary War, the fort was used as a prisoner of war camp, and it was occupied by northern troops during the Civil War. In 1922, the State of Maryland purchased the land and began to transform the fort into a state park.

After entering through the fort’s massive gates, visitors can explore the grounds and visit the restored barracks. See how unlisted soldiers lived in 1758, view the officers' quarters where war strategy was formulated, and visit the armory. Visitors will learn about the women that worked at the fort and see the artificer’s workroom where tailors customized the soldiers' uniforms. Stop into the visitors center to watch a short film about Fort Frederick and learn about the nearby attractions, including the Western Maryland Rail Trail. 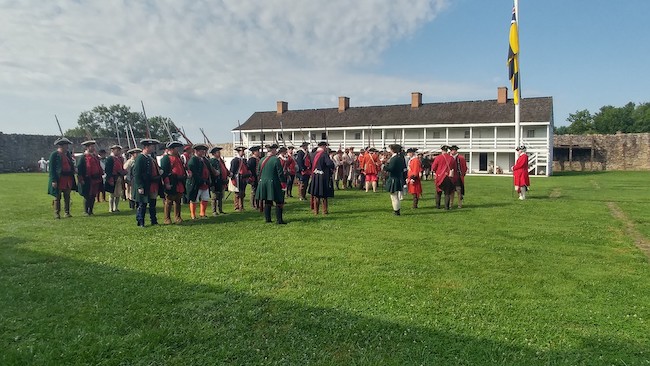 Courtesy of Friends of Fort Frederick

The fort has a lineup of events designed to teach visitors about life at Fort Frederick. Learn how to raise and fold the flag, fire a musket, participate in soldier drills, and more. Demonstrations and learning events run daily from 10 a.m. to 5 p.m. During the spring and the fall, Fort Frederick State Park hosts reenactments from different periods of the fort’s history. Check the park event calendar for more information.

Fort Frederick State Park is located about an hour and a half from Baltimore in Big Pool, Maryland. The park is open year-round from 8 a.m. to sunset, April to October, and 10 a.m. to sunset, November to March. Entrance fees are $3 per car for Maryland residents and $5 per car for out-of-state visitors. The park also has campgrounds, a boat launch, hiking trails, picnic areas, and a camping store.

What is your favorite fort to visit in Maryland? Tell us in the comments!