Fort McHenry offers an informative and colorful lesson on the history of our country.

Fort McHenry is one of the oldest military posts in the United States. Built on the site of the original Fort Whetstone, Fort McHenry opened in 1800 and is best known for the battle of 1812. Located at the edge of Locust Point, the fort successfully defended the city against British armies during the Battle of Baltimore. In the aftermath of the battle, Francis Scott Key was inspired to write “The Star-Spangled Banner” after witnessing the flying of the American Storm flag in victory.

Today, Fort McHenry is a popular attraction for tourists and locals alike. The fort offers guided tours, or visitors can freely roam the fort, barracks, and structures on the site. The museum and visitors center gives visitors a quick history lesson via a short film, and guests can view exhibits detailing the history of the fort. Visitors can also participate in daily flag changes and interactive history lessons. 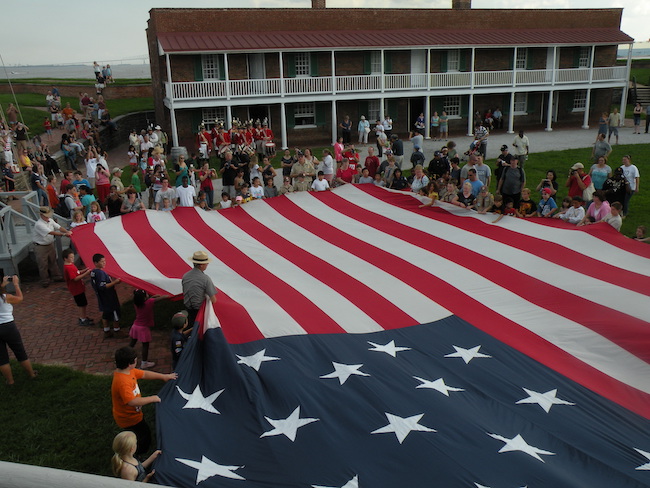 One of the most popular attractions at the fort is the changing of the flag. Flag changes at Fort McHenry happen daily at 10 a.m. and 4 p.m., weather permitting. Visitors can help rangers raise or lower the flag while getting a lesson about the different types of flags that fly at the fort.

In addition to the flag changes, the fort has three other daily programs: flag talk, Battle of Baltimore, and War on the Chesapeake. During flag talk, guests help unroll a 30 by 42-foot replica flag and learn the history behind the flag. War program times vary; visit the website for the daily program schedule.

Fort McHenry is open year-round from 9 a.m. to 4:45 p.m., with extended hours in the summer. Admission is $15 per person for a seven-day pass, and children under 16 are admitted free.

What is your favorite exhibit at Fort McHenry? Tell us in the comments!

Summer Is Sunflower Season at Burnside Farms in Nokesville

Where to Pick Peaches in Northern Virginia