Colorado State-cations: Bask in the Wonder of the Garden of the Gods

Colorado State-cations: Bask in the Wonder of the Garden of the Gods

Day trip to Colorado Springs and visit one of Colorado's most impressive natural areas.

Where can you find 300-foot, towering sandstone formations, amazing views of Pikes Peak, wonderful hikes, and Colorado's nature in all its glory for free? The Garden of the Gods near Colorado Springs!

This amazing natural area was registered as National Natural Landmark in 1971 and is a favorite destination for locals and tourists, alike.

Of course, the biggest draws are the huge red rock formations that rise into the beautiful blue sky. This geological wonder is part of the Fountain Formation, which also includes the red rocks at Red Rocks Park, Roxborough State Park, and even the Flatirons in Boulder.

This natural area has a long history that luckily left it intact for all to enjoy. It was considered sacred land by area Native American tribes. As the railroads made their way into Colorado, Charles Elliot Perkins, head of the Burlington Railroad, bought hundreds of acres in the Garden of the Gods area in 1879. He bought it to build a summer home but had the foresight to understand the importance of leaving it in its natural state, and he opened to the public during his ownership. He passed away in 1907, and his children honored his wishes for the land.

"In 1909, Perkins' children, knowing their father's feeling for the Garden of the Gods, conveyed his 480 acres to the City of Colorado Springs. It would be known forever as the Garden of the Gods 'where it shall remain free to the public, where no intoxicating liquors shall be manufactured, sold, or dispensed, where no building or structure shall be erected except those necessary to properly care for, protect, and maintain the area as a public park'," according to GardenofGods.com.

Today, the park has so much to see and do that you could spend several days there surrounded by awe-inspiring scenery. It's a favorite of photographers—you can find some of the best views from The Garden of the Gods Visitor & Nature Center terrace, the North Main or Balanced Rock parking lots, and the Siamese Twins Trail. Please note that drones are not allowed in the park.

Check out what is in store for you by watching the video below, courtesy of GardenofGods.com.

The park offers 15 miles of trails to explore. You can find a complete list of the available trails at the Garden of the Gods Visitor Center.

A great place to start is the Perkins Central Garden Trail that is a paved walkway with less than a 30-foot rise. It is wheelchair and stroller accessible. It's at the heart of the park at the base of the tallest formations, so you'll get some spectacular views. If you want to get away from much of the traffic, the Chambers/Bretag/Palmer Trail is a smart choice.

The park website recommends several other trails, as well: 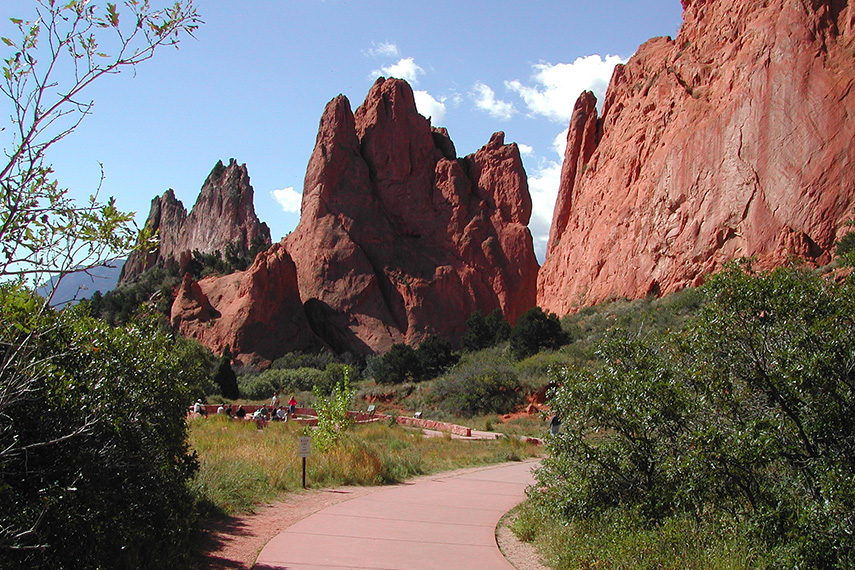 Take to the Wheels and Tour the Park

If you aren't into hiking or just want to let someone else do the navigating, you can also take open-air Jeep and Segway Tours. You can also take a wonderful tour of the park via bikes and electric bikes, which you can rent. You are also encouraged to bring your own bikes and cruise around the park on your own. 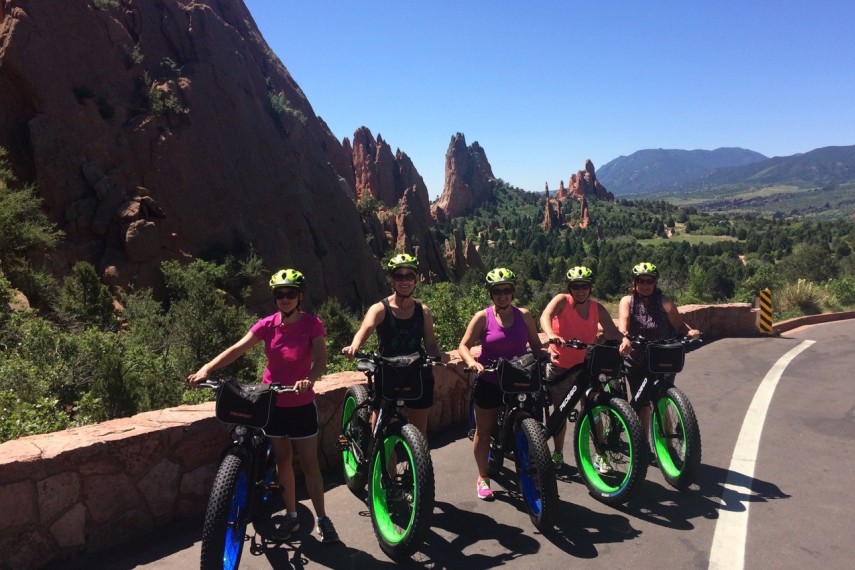 Yes, you can climb in the park. In fact, it is one of the oldest established rock climbing areas in the United States. Climbers should expect soft sandstone, which can crumble. Many of the main rocks formations are open to climbing, including North Gateway Rock, South Gateway Rock, Grey Rock, and Keyhole Rock. Montezuma Tower, The Three Graces, Red and White Twin Spires, and Easter Rock are also open. 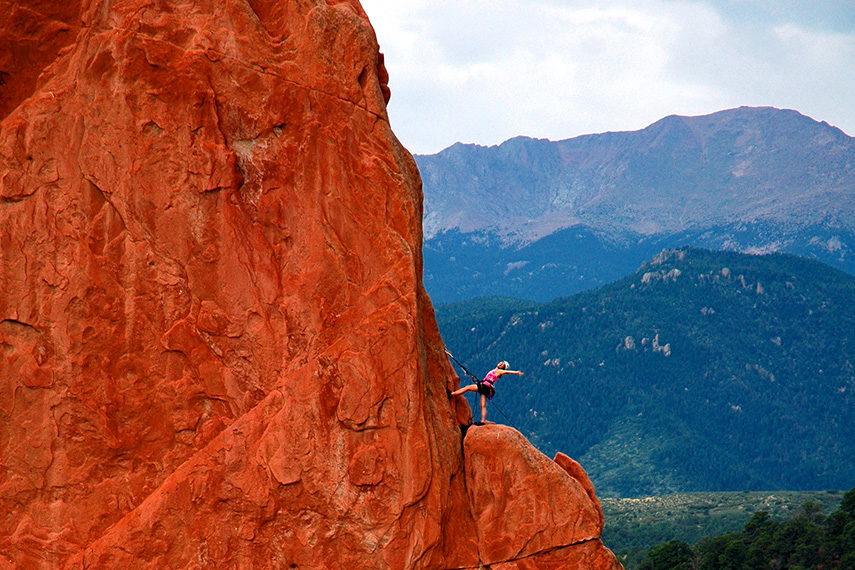 If you want to take a guided climb, Front Range Climbing (as well as other groups) offer fun, family adventures. Learn more about booking an adventure, as well as regulations here.

Step back in history to get a unique view of the park. Rock Ledge Ranch Historic Site is a living history museum in the park. You'll find historic interpreters dressed in authentic clothing of the era, demonstrations, hands-on activities, and much more. A reconstructed cabin, live animals, and a general store are also on hand. This interactive site also hosts a wide variety of activities throughout the year that are definitely worth checking out. 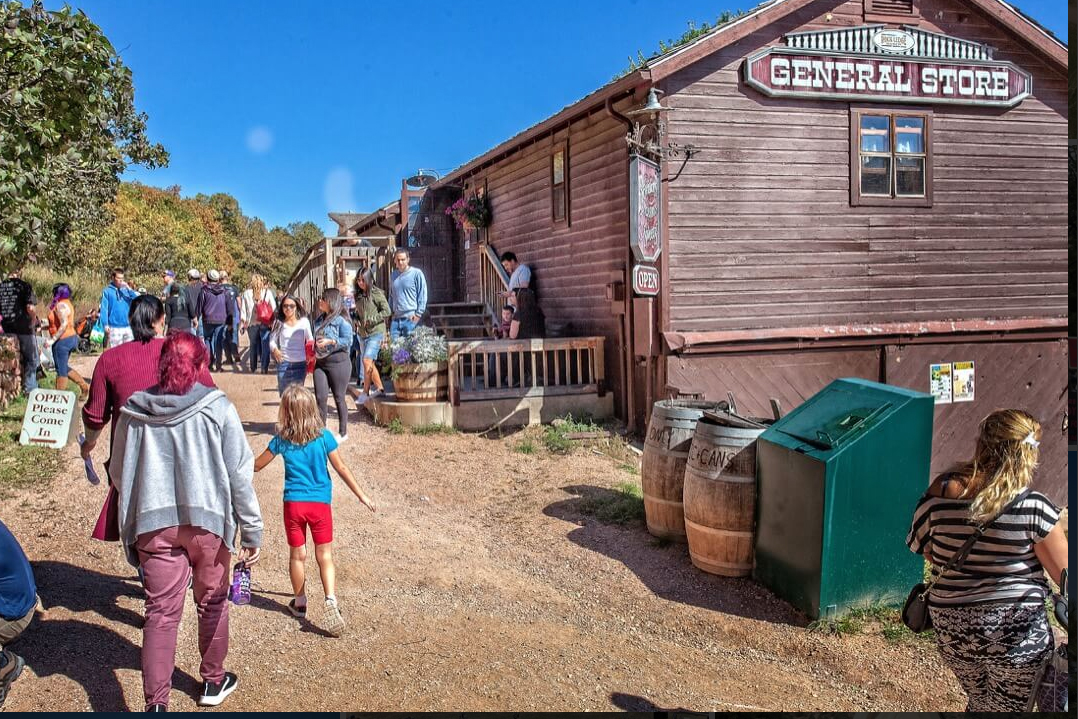 There is so much more to do throughout the year, that a good place to start any visit is the go to GardenofGods.com to see what's going on during your desired visit dates!

Have you visited the Garden of the Gods before? Share your photos with us in the comments below.