The state's history still stands in some beautiful areas, and you can do some leaf-peeping on your visit.

There are over 1,500 registered ghost towns in Colorado, with about a third of those that still have some form of structures and ruins. Most of the towns are a result of the state's silver, gold, and railroad booms in the late 1800s. Towns died out nearly as fast as they popped up, leaving behind some amazing mining structures, mining shacks, and more. And, as we are in the approach to the Halloween season, keep your ears open and eyes peeled for a possible ghostly glimpse into the past!

Check out the list below for a few of the ghost towns that you can access via road. Please note that some are more preserved and larger than others, and a four-wheel-drive or high-clearance vehicle may be recommended. Also of note, some, like Gilman, are on private property, so ensure you are following all laws and do not climb on or in any marked areas. Admission or honor-system admission may be required.

North of Silverton via Co Rd. 2 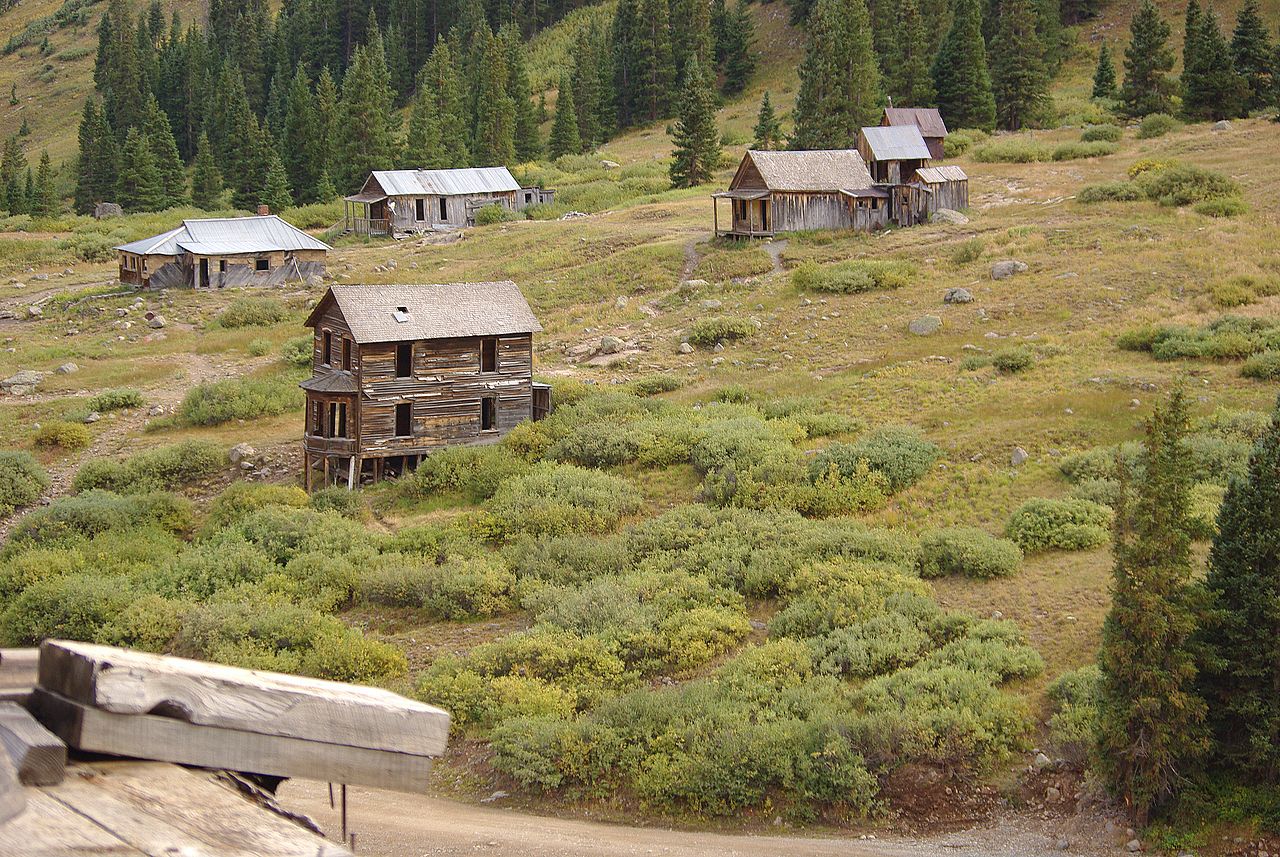 At 11,220 feet, Animas Forks was the highest mining settlement in North America in its heyday. The silver in the aptly named Silverton area brought a diverse mix of prospectors to Animas Forks to strike it rich. At one point, "it had its own newspaper, the Animas Forks Pioneer, as well as a saloon, a hotel, three general stores, two boardinghouses, a post office, a butcher, and about 30 cabins," according to Our Community Now in-depth look at the ghost town.

But, as with most high-country settlements, the snow, the silver bust, and natural disasters took its toll. The area got so much snow that the miners had to burrow tunnels to move around, and avalanches were a constant threat. Fire gutted the town in 1913, and by 1920 it was completely empty.

Today, you will access the town by way of Silverton and the Million Dollar Highway (Highway 550). No matter which direction of the highway you come in, you are in a treat for some of the most beautiful fall colors and scenery the state has to offer. Not to mention, if you are a four-wheel enthusiast, you can access Animas Forks via the Alpine Loop, for views of miles of virtually untouched wilderness.

The town has undergone a lot of restoration and is among the best-preserved today, including a very beautiful home that had been the residence of mine owners.

11 miles out of Aspen up Castle Creek Rd. 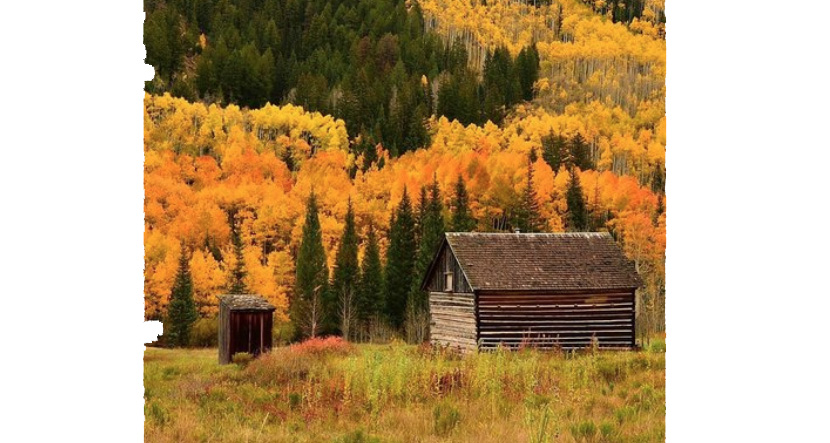 Ashcroft has had several uses throughout its history, and today, you can visit and take a self-guided tour in the off-season, with the added bonus of catching some fall color off the beaten path. By 1883, due to silver prospecting, Ashcroft had around 2,000 residents, a courthouse, a school, and of course, numerous saloons that miner could shake the dust off at and enjoy a brew. It went to the way of many other towns and was down to about 100 residents in 1885.

In the 1930s, it was almost reborn as a winter-sports lodge, but WWII halted those plans. The 1950s saw it go Hollywood, as several storefronts were added to turn it into a Canadian snow town for the popular TV series Sgt. Preston of the Yukon.

The Blue Mirror Saloon, post office and more still stand. Today, it's under the care of the Aspen Historical Society, which has a docent on-site during the summer season. This fall, you can take a self-guided tour.

7 miles West of Vail on Highway 24 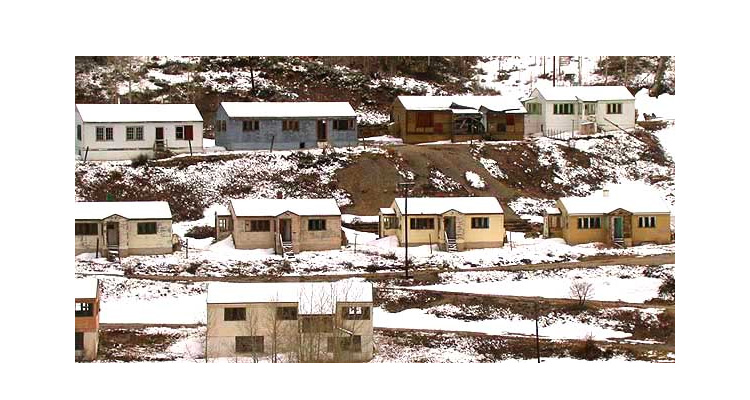 It's important to note that Gilman rests on private property, and authorities have been known to prosecute trespassers. So, best that you just stick to the highway, where you'll have views of a town that made it almost 100 years before it was left to nature. It was once a hub of silver and gold mining but was evacuated because the EPA deemed it toxic. Later, it was cleaned up to turn it into a ski area, but those plans never came to fruition.

The immediate evacuation left behind quite a few buildings, including a school, boarding house, and more. All of these can be seen from the highway. 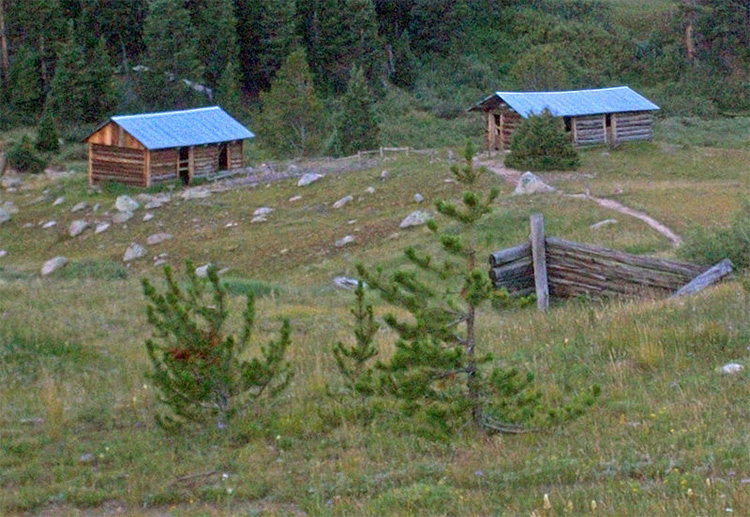 Near Aspen, up the beautiful fall drive on Independence Pass, you will find the former gold camp of Independence. Once the home of more than 500 miners and several businesses, the town is now a don't miss stop along the Top of the Rockies Scenic Byway (which is a recommended leaf-peeping drive). It sits at 10,900 feet, so it was no wonder that when the winter hit and the gold petered out (which happened in about a year), miners headed to Aspen for steady work and warmer accommodations.

In 1888, only about 100 residents were left in the town, and a horrible winter drove them out.

"During the winter of 1899 the worst storm in Colorado’s history cut off the supply routes to Independence. The miners, who were running out of food, proceeded to dismantle their homes to make 75 pairs of skis and to escape en masse to Aspen," says AspenHistory.org.

Today, a trace of the stables, the general store, and the intern cabin still stand. A docent is onsite from June 22–August 22. In the off-season, fall included, self-guided tours and honor-system admission are implemented. 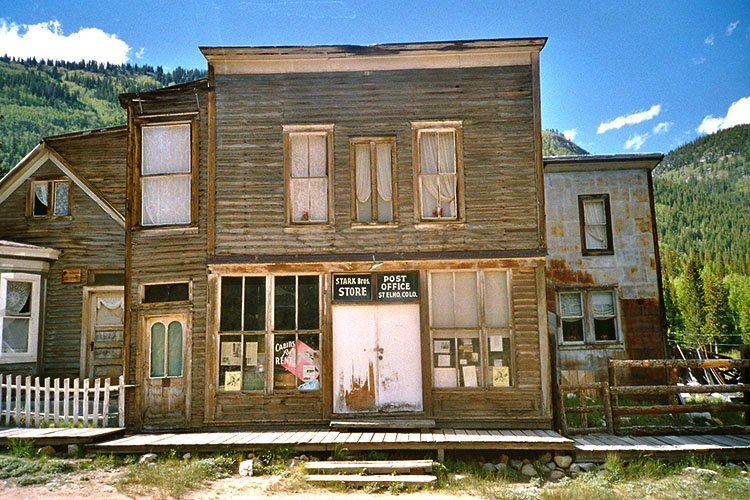 St. Elmo is one of the easiest ghost towns on the list to get to, accessed via a gravel, U.S. Forest Service road that is okay for most cars. Please note that in the winter, the road is often closed. St. Elmo came into being in 1878 (then called Forest City) and quickly grew to a population of 2,000. By 1881, it was a station on the Denver, South Park, and Pacific Railroad, and proved to be a thriving mining and railroad community. However, like most towns in the West, the boom didn’t last, and when the railroad line moved out of town in the 1920s, it was abandoned by all but a long-standing family, the Starks. Check out more about St. Elmo's history in Our Community Now's in-depth look at the ghost town.

Much of the town has been preserved, with the general store open in the summer months. The old hotel, post office, jail, and several residences still stand. Some of the homes are actually occupied part of the year.

But what about ghosts?

St. Elmo may be a ghost town in more ways than one. The last residents of the town were siblings Annabelle and Tony Stark (not that Annabelle OR Tony Stark), who were reported to have gone mad living alone for so many years in the tiny St. Elmo town. Annabelle particularly didn't like trespassers when she was alive, making rounds with her rifle to protect her home. People have claimed to see a woman in white looking out a window in the second-story motel, waving down people she feels are trespassing, and strolling its rooms.

Do you have a favorite ghost town in Colorado? Let us know in the comments.