Hike to the WWII-Era Stormy Peaks B-17 Crash

Hike to the WWII-Era Stormy Peaks B-17 Crash

Take a six-mile trek to the site of a 1943 airplane crash in the Northern Colorado mountains.

The plane and crew were on a nighttime training flight, and its path took it directly through Larimer County's "Bermuda Triangle," an area of major wind shifts and weather changes. Around 11 p.m. the plane slammed into the rock hogback of the aptly named Stormy Peaks, just 40 miles west of Fort Collins, in what is now Pingree Park.

The plane exploded on impact, instantly killing all eight members of the crew, and scattering parts and twisted iron pieces across the mountainside, where they remain today.

It was likely the wind that brought the bomber down, as it was one of three planes to crash near Fort Collins and Loveland area in 1943-1944. All of the tragedies were attributed to wind, which made the area particularly dangerous to fly in. An additional factor could have been the inexperienced crew who were on the training flight, the youngest being 22 years old. The flights were specifically designed to train crews at night and in bad weather -- tough conditions for even experienced pilots. 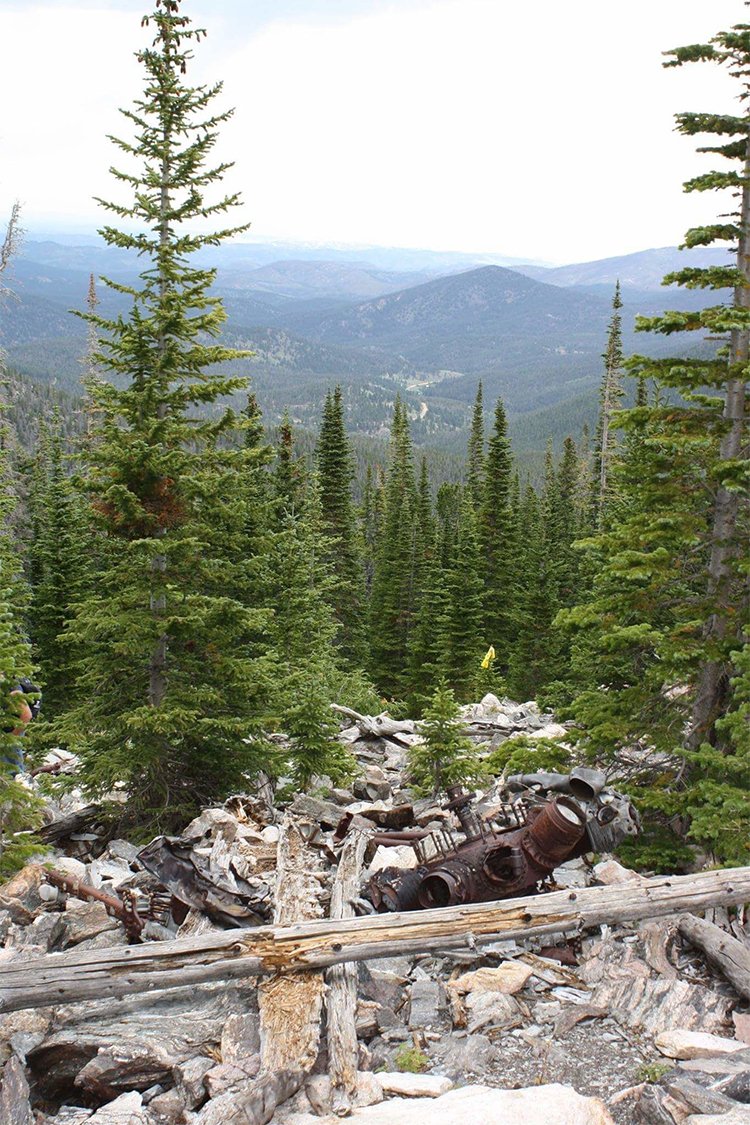 To find the wreckage, you'll have to do take an excursion on a network of trails to get to the site. It sits about three miles up Pingree Park’s Stormy Peaks trail, past Twin Lakes Reservoir, and around some twists and turns. The trail gets a wee steep after you come around the reservoir, and you have to keep your eyes out for arrow-shaped rock stacks that point the way. You'll walk along an irrigation canal and then head into the forest until you start seeing pieces of the wreckage.

The engine, wheel struts, and a piece of the tail or wing assembly are some of the bigger pieces that are on the ground. Small pieces of metal are even more plentiful throughout the area.

Visitors are asked to remember what this wreck is and give proper respect to the site. It is history, and in some ways, a memorial to the crew lost, and hikers have described it as somber and heavy. Please leave everything where it lies, don't take anything home, and don't climb on the bigger pieces of the wreck.

How to Get There, Courtesy of fcgov.com:

From the Pingree Park campus, follow the Stormy Peaks trail to the Twin Lakes turnoff. Once at Twin Lakes follow the trail/road to the right around the west end of the reservoir. Continue along the trail/road going right. Veer left at a fork. As the trail narrows, pass three posts and climb a steep hill entering the wilderness area. Follow a trail along a ditch, then through a clearing. Continue on the trail to the boulder field where the remains of the plane can be seen.

Do you like to hike to interesting, historical, creepy (and sometimes haunted) sights, check out these other interesting hikes!

5 Colorado waterfalls to add to your summer bucket list!