Our Community-Built Playground at Stadium Place offers a huge playground that is open to the public and maintained in partnership with the Y.

The Our Community-Built Playground originally opened in 2005 after it was designed with input from hundreds of local school kids and built by volunteers from the local area and all over the country. In 2008, the playground burned, so it was rebuilt in the spring of 2009, again through the wonderful volunteer work of amazing friends and neighbors. Since then, the playground is maintained through a partnership between the Weinberg YMCA and The Friends of Our Playground organization and it provides a cherished play space for kids in the area. 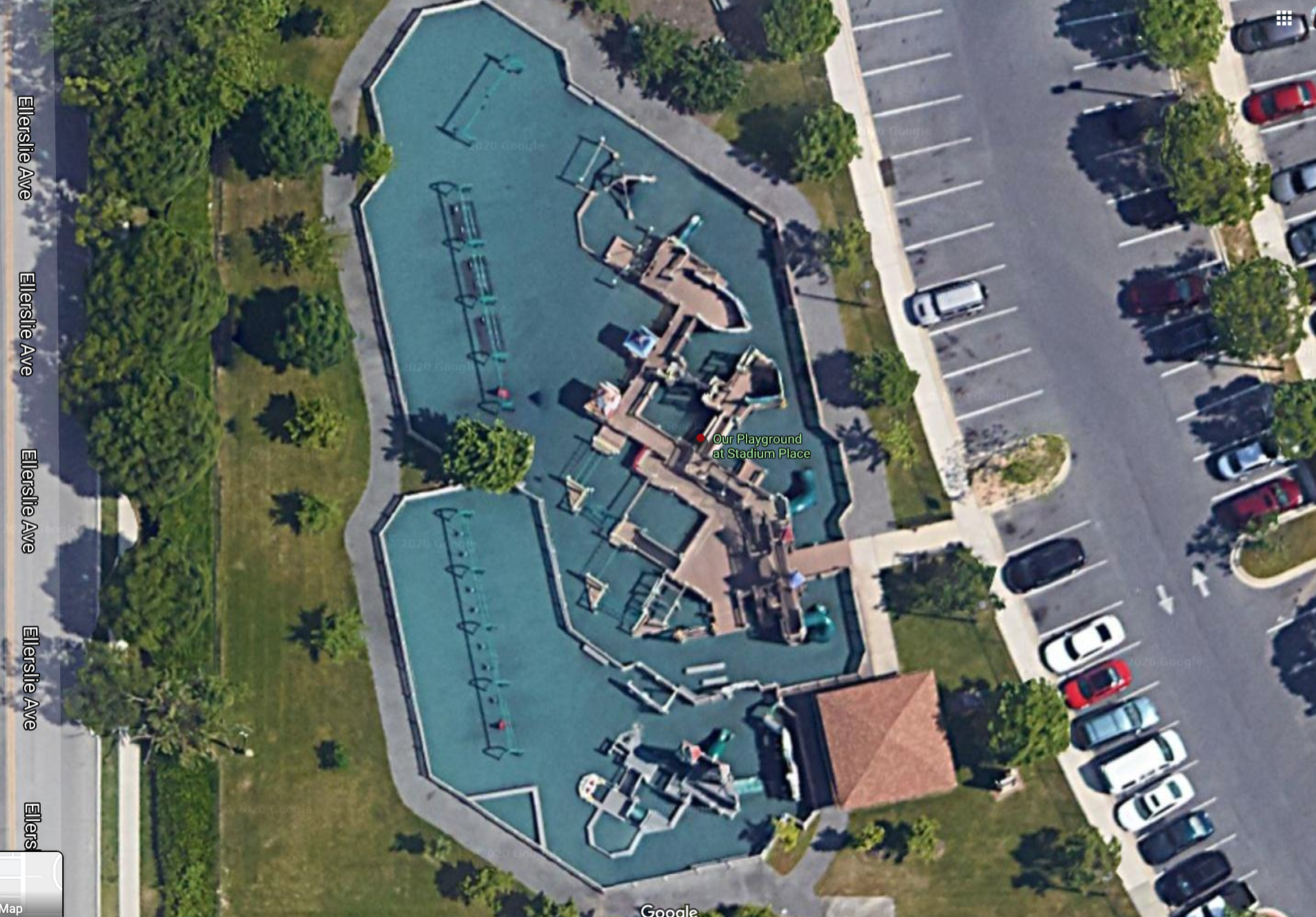 This playground provides so much for kids to do and experience. There are two areas: a larger “big kids” area and a smaller (but not small) tot lot. The tot lot provides a lot of fun climbing and sliding action for the smaller kids. There is a climbing structure with two slides, multiple platform levels for climbing, a pretend train, a tunnel to crawl through, and a couple of balance beams. There are seven toddler swings and an adaptive swing seat for special needs. There are also a series of built structures designed to look like buildings and a train station for imaginative playing.

The area for older kids takes up about 2/3 of the sizable lot. There is a large, sprawling climbing structure with multiple sections and connecting walkways. The highest parts of this structure are about 10 feet high and feature two spiral slides from the castle-themed section of the structure. There is also a fire truck and a boat, which features a smaller, straight slide. The walkways are mostly wood, though some of them are made from a flexible material for fun bouncing. There is also a fireman's pole to slide down, and multiple ropes, stairs, ladders, and tire structures to climb up.

In addition to the main structure, there is a suspended rock wall to challenge older kids, as well as both short and tall versions of rings and monkey bars. This section of the playground also has a performance area modeled after the Hippodrome for imaginative play, and multiple types of swings, including standard swings, a tire swing, and an adaptive swing seat for special needs. There is an oversized tic-tac-toe board and a musical chime for the kids to play with. Finally, there is another climbing structure made out of multiple tires. It doesn't move, but many kids treat it like a horse.

In addition to all of this equipment, there is still also a surprising amount of open space for running and playing.

The whole playground has a rubber floor for super-safe playing, and there are many benches to sit on. With several trees around that provide shade, as well as a covered area that is perfect for picnics, this is a good place to play on a sunny day. The entire playground is surrounded by a fence with only one entrance, though there are a few areas where a bench butts up to the fence and an energetic kid could get over pretty easily. When there have been broken pieces of equipment, the maintaining organizations are quick to close them off or remove them for safety, and they get the pieces replaced as soon as they can.

Don't worry about parking—The playground shares a large parking lot with the Weinberg YMCA, and the play area is a considerable distance from the large streets surrounding it. The playground is only open during the day, and sometimes during poor weather, they don't open it at all, so keep that in mind!

There are no bathrooms connected to the playground, nor a water fountain (yet!), but the Weinberg YMCA building is very close by. They will allow you to use their bathrooms and water, but you do have to sign in on their sheet if you're not a member (or scan-in with your membership card if you are).

Have you been to this playground? Let us know what you think of it—or suggest another play space for us to cover—in the comments!

Check out one of the other Baltimore-area playgrounds we've featured in our Let's Go Play series: