The museum is one of 36 sites located on Maryland's Eastern Shore exploring the abolitionist's heroic life.

Last Tuesday was the 170th anniversary of Harriet Tubman's escape out of slavery. To remember this momentous event, one should make a visit to the Harriet Tubman Underground Railroad State Park and Visitor Center in Church Creek, Maryland, to pay their respects. It would make a great day trip—fun, educational, and inspirational all at the same time!

Since opening its doors in the spring of 2017, visitors have flocked to the informative museum on Tubman's life in record numbers. In just over two years, 216,000 guests from around the United States and the world have come to learn and pay tribute to the historic figure.

The museum contains 10,000 square feet of informative exhibits in various forms of media on Tubman, including a life-sized bust of the figure and eight photographs. Visitors can learn about Tubman's role during the Civil War as a nurse and spy, as well as her raid on the Combahee River which led to liberating 750 slaves. It also has a classroom, theater, gift shop, and library.

The center is also part of the Harriet Tubman Underground Railroad National Historical Park, which was designated as a monument by the National Park Service in 2014. 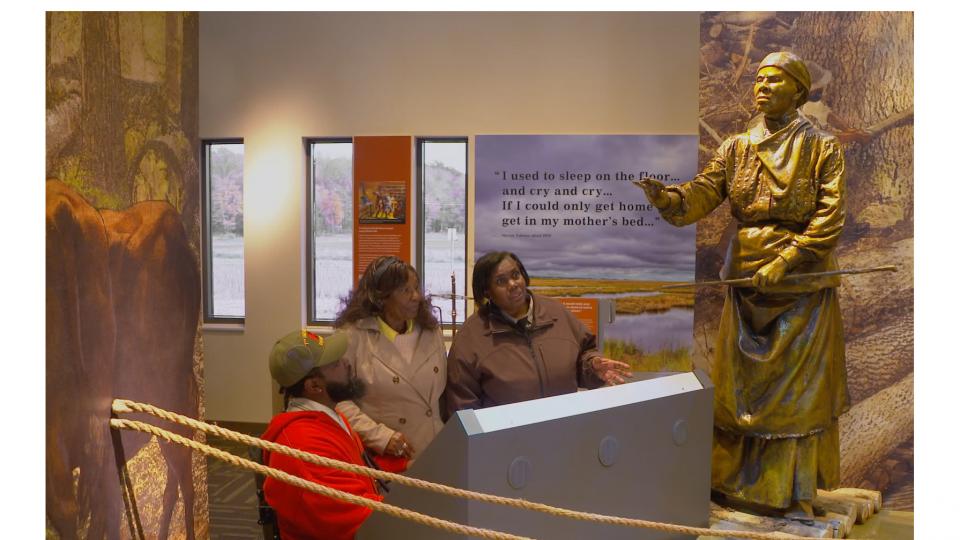 The visitor center isn't just a museum about the abolitionist's life; it's a living, breathing monument to an incredible life lived. It's located in Dorchester County where Tubman was born as a slave. It's also where she made her courageous treks to liberate enslaved family and friends. Within an 11-year period, Tubman made 13 trips and freed 70 friends and family from the bondage of slavery. While her efforts were successful (she was never caught), the procedure proved dangerous.

"Journeys on the Underground Railroad were time-consuming and risky, so you would only do it for someone that meant something to you," said Angela Crenshaw, the museum's Assistant Park Manager Ranger.

For an even more immersive experience, history buffs can do the Harriet Tubman Underground Railroad Byway. It's an independent driving tour spanning 125 miles and 36 sites significant to Tubman. With a full tank of gas, guests can traverse Maryland's Eastern Shore, Delaware, and Philadelphia and see the region through Tubman's eyes.

Tubman's life has experienced a renewed interest by historians and regular people alike, so it's no wonder the museum has spiked in popularity. And with the biopic Harriet premiering in the fall, we imagine the numbers will reach record-breaking heights!

The museum is open every day from 9 a.m. to 5 p.m., and admission is free. You can find out more on their website. And if you missed it, click here for our coverage on the abolitionist hero!

Have you visited the Harriet Tubman Underground Railroad Visitor Center? What did you think? Let us know in the comments!