Visit Where the Buffalo (Bison) Roam in Colorado

Visit Where the Buffalo (Bison) Roam in Colorado

The state boasts several herds of bison, and you can visit many of their reserves.

In the mid-1800s the plains of North America were roamed by an estimated 30 to 60 million bison. Just around the turn of the century, fewer than 1,000 remained due to overhunting. Today, Colorado is doing its part to help preserve bison, with several reserves and privately managed herds across the state, and you can visit several of them!

In fact, there are quite a few just a short drive from the metro area. Check out our list below to see bison in Colorado (there are a few other herds out there, but these are your best chance at seeing the majestic beasts)!

While you are on the hunt to bison watch, there are a few things to remember: 1) Because these herds are located in large, natural areas, they may not always be visible from viewing areas, 2) While the bison are on a managed nature preserve, they are still wild; please don't try to touch them, and 3) Don't forget your camera because the photo ops will be amazing.

Side note: We may call them buffalo, but technically, the animals we have in North America are bison. Buffalo are found in Africa and Asia.

Just minutes from Denver, you can view about two dozen or more direct descendants of the last wild bison herd in the U.S. Simply head up I-70 and take exit 254. You may be able to see them right from the road, or view them from vantage points along trails in Genesee Park. These bison are particularly unique because they display wild behavior that most of today's bison don't display. 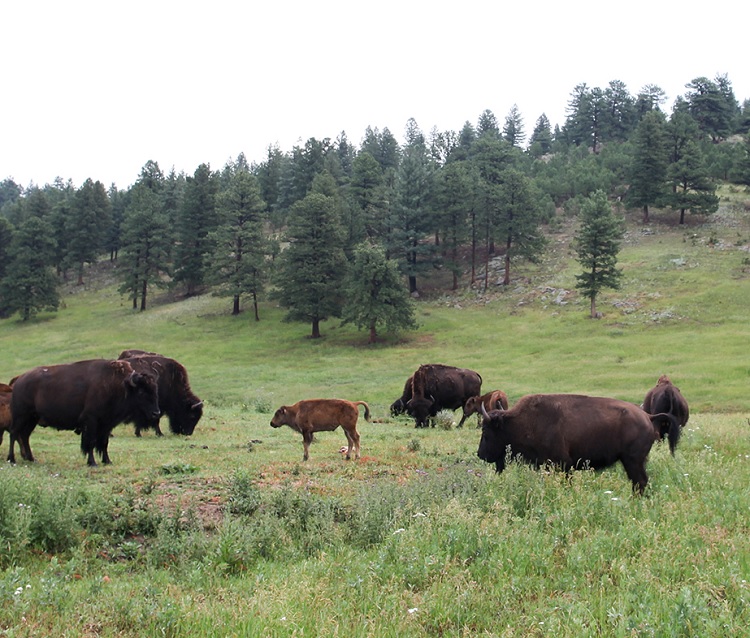 Courtesy of City and County of Denver

"Their behavior shows few cattle traits (rare for bison), and they engage in what is regarded as ancient bison behavior: They’ll form a circle with bulls on the outside if a coyote approaches, and if one member of the herd is cut, the other members will roll in the blood, presumably so predators don’t know which among them is weakened," says Denver.org.

Just 10 miles outside of Denver (technically in Commerce City) sits a 15,000-acre home to more than 280 native flora and 330 animals species, including bison.

Your best chance of seeing the bison on the refuge is taking the Wildlife Drive. You are required to stay in your vehicle (no biking or walking in) because bison are wild and unpredictable (and huge). 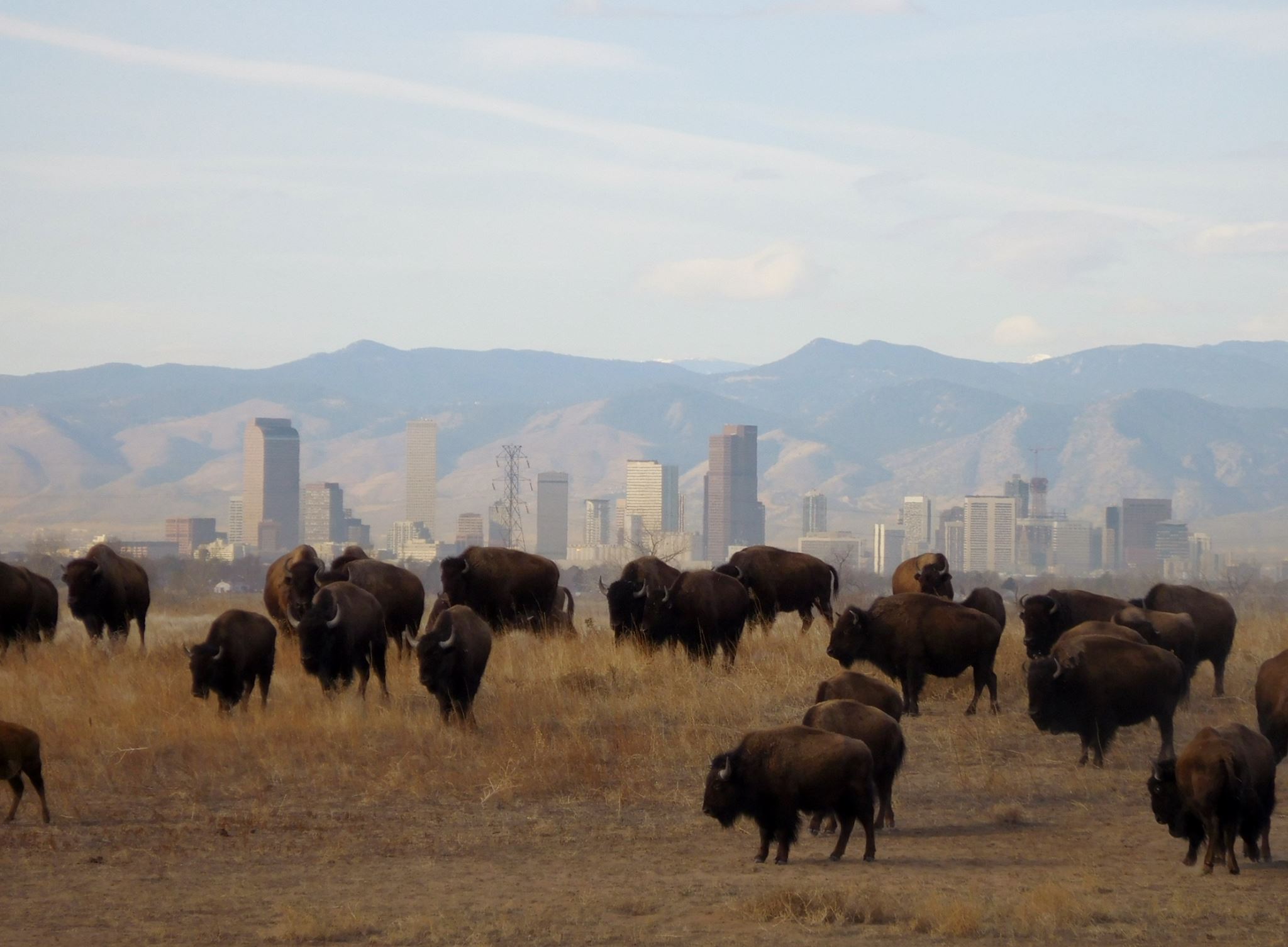 Just south of Highlands Ranch is Daniel's Park, a 1,000-acre open area that is mostly reserved for a herd of bison. When they are visible (there are areas covered by oak brush and trees), they are a pretty magnificent sight. Often, they will get right next to the road, so you can really get a great view, and they may be most likely to head toward the road at morning and dusk. In the winter, they are sometimes fed near the big red barn (you can't miss it), so late afternoon/evening can also be a good time to see them.

Located on the Soapstone Prairie Natural Area, 25 miles north of Fort Collins, this herd preserves genetics from the Yellowstone herd. Currently, the herd is part of a breeding program to ensure these strong genes are available for years to come. You can check them out from dawn to dusk March through November.

From Fort Collins, take U.S. Highway 1 (Terry Lake Road) to CR 15 North. Turn north on Rawhide Flats Road and continue on that road until you reach the entrance station. You can sometimes view the bison from Rawhide Flats Road. From Interstate 25, take Exit 288 to Buckeye Road and head west to County Road 15 north. Then follow the directions above. 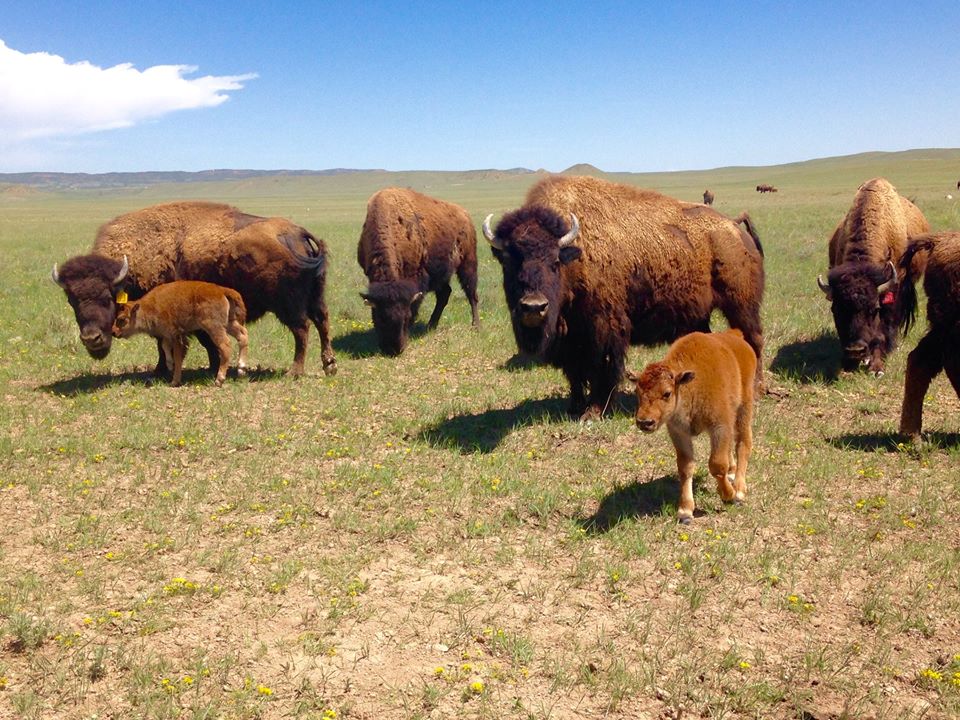 If you feel like taking a drive north, head to the Colorado/Wyoming border and visit the Terry Bison Ranch. The ranch offers a ton of fun, including a train tour of its very own bison herd. Grab a seat on one of the custom-built trains for the narrated tour. After the tour, stop by the restaurant and sample a bison burger.

The San Luis Valley is home to a 2,000-head herd of bison on the Zapata Ranch. The bison are managed as a conservation species, meaning that they run as a wild herd: no branding, supplemental feed, or weaning. The ranch offers bison tours, so you can see them for yourself. The ranch is also a working cattle ranch, giving you a true western experience.

Have you visited bison in Colorado? Let us know if we missed a preserve in the comments.