What's Up With That Giant Skeleton at the Denver Public Library?

What's Up With That Giant Skeleton at the Denver Public Library?

The new display features a giant sculpture of a skeleton ... but it ain't a dinosaur!

Visitors to Denver Public Library may have noticed the giant prehistoric-looking skeleton exhibit that has been on display the last few weeks.

The skeleton is not bone, it's 3D-printed and part of a nomadic contemporary art museum called Black Cube Nomadic Museum. The piece is held together by a metal armature.The skeleton looks like a giant bird, of some sort, from the time of the dinosaurs, but it's not the extinct Archaeopteryx, rather it represents something much more common—the giant skeleton is a giant replica of a more modern cousin to the prehistoric species—the modern-day broiler chicken skeleton.

German artist Andreas Grenier is the mind behind the sculpture, titled "Monument for the 308", which he made by 3D printing each piece. Grenier began with an x-ray of a boiler chicken, then printed pieces of the skeleton 20 times larger than actual size. The giant size of the sculpture and similar style to that of dinosaur skeletons and replicas in museum displays lends to the assumption that one is looking at an extinct prehistoric species. 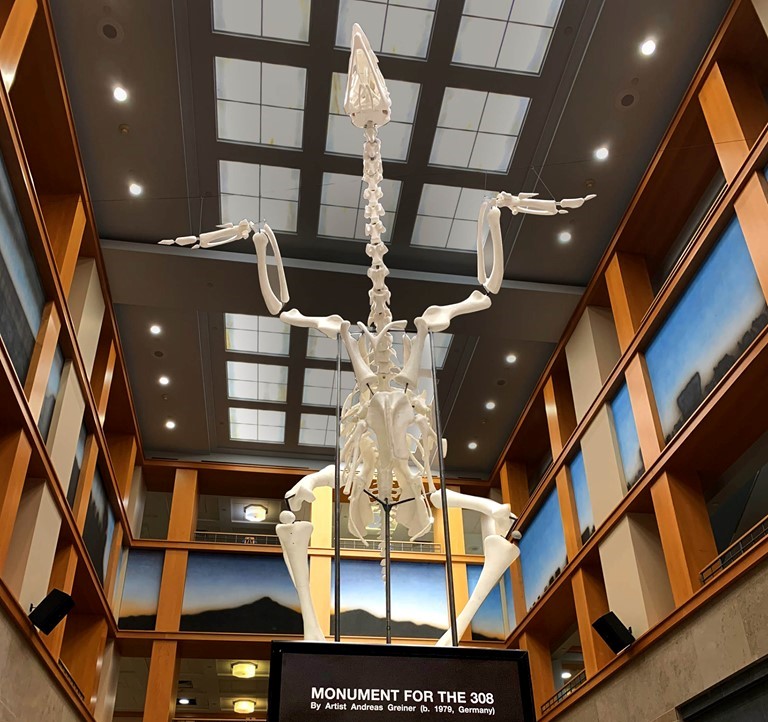 Known as the Ross 308 chicken, the broiler chicken is one of the most commonly consumed birds by humans on the planet. They are known for maturing quickly, and as such, is a common meat breed. The broiler chicken is a hybrid type of chicken, one that has been manipulated by humans to serve the consumption demands. The chicken is fed specially mixed food to aid in growth, reaching the required weight for slaughter in a span of about 30 days. The artwork is intended to highlight the impact that humans and their consumption of the chicken has on the planet, as well as the impact the genetic changes to the chicken have had on the species.

"Monument for the 308" presents the image of the chicken in a similar method to the way prehistoric skeletons are reconstructed, showing the connection between past and future. Birds are, in fact, the closest living relatives of dinosaurs, and according to the American Museum of Natural History, birds are viewed by most paleontologists as living dinosaurs.

“The artwork focuses on human’s impact on the world, as seen through the genetic changes this animal has experienced because of humans. Furthermore, Monument for the 308 positions the broiler chicken in relation to the method in which we display reconstructed dinosaur skeletons. Thus, this artwork illustrates a connection between relics of a past geologic era with future relics of the human era.”

Denver’s Central Library was selected as the location for the giant skeleton sculpture because a library is a place where humans seek out knowledge, and the monument seeks to prompt thought and awareness.

The sculpture will be at the library through December 9, 2019, and is available for viewing during regular hours. Then, once it's done with its stay here, the "Monument to the 308" will head back to Berlin, Germany.

Have you seen the giant chicken skeleton at the Denver Public Library? Share your thoughts (and photos) with us in the comments below.