The 2020 McLaren 570S Spider is a bloody brilliant road car!

When McLaren North America reached out to me to ask if I'd be interested in driving the 2020 McLaren 570S Spider, I couldn't concentrate for the rest of the day. Rather, I spent the next several hours sifting through Google Maps looking for the squiggle routes. For a car-lover, there are few things in this world that are better than a pure-bred, hot-headed mid-engine sports car and wide-open winding mountain roads. (Don't tell my future wife, but thanks to cars like this, my wedding day will be lower on the list of "happiest days of my life.")

Where to even begin? Simply put, the 570S Spider is a gift that makes you believe in a higher power. And I don't say that because it's expensive. At $233,780, it's a bargain compared to some other exotics in its class, and it's not even the most powerful either—though the way it delivers its 562-horsepower is enough to time travel. I say that because of how it all comes together. This is a truly special car just oozing brilliance and dripping with a racing pedigree. 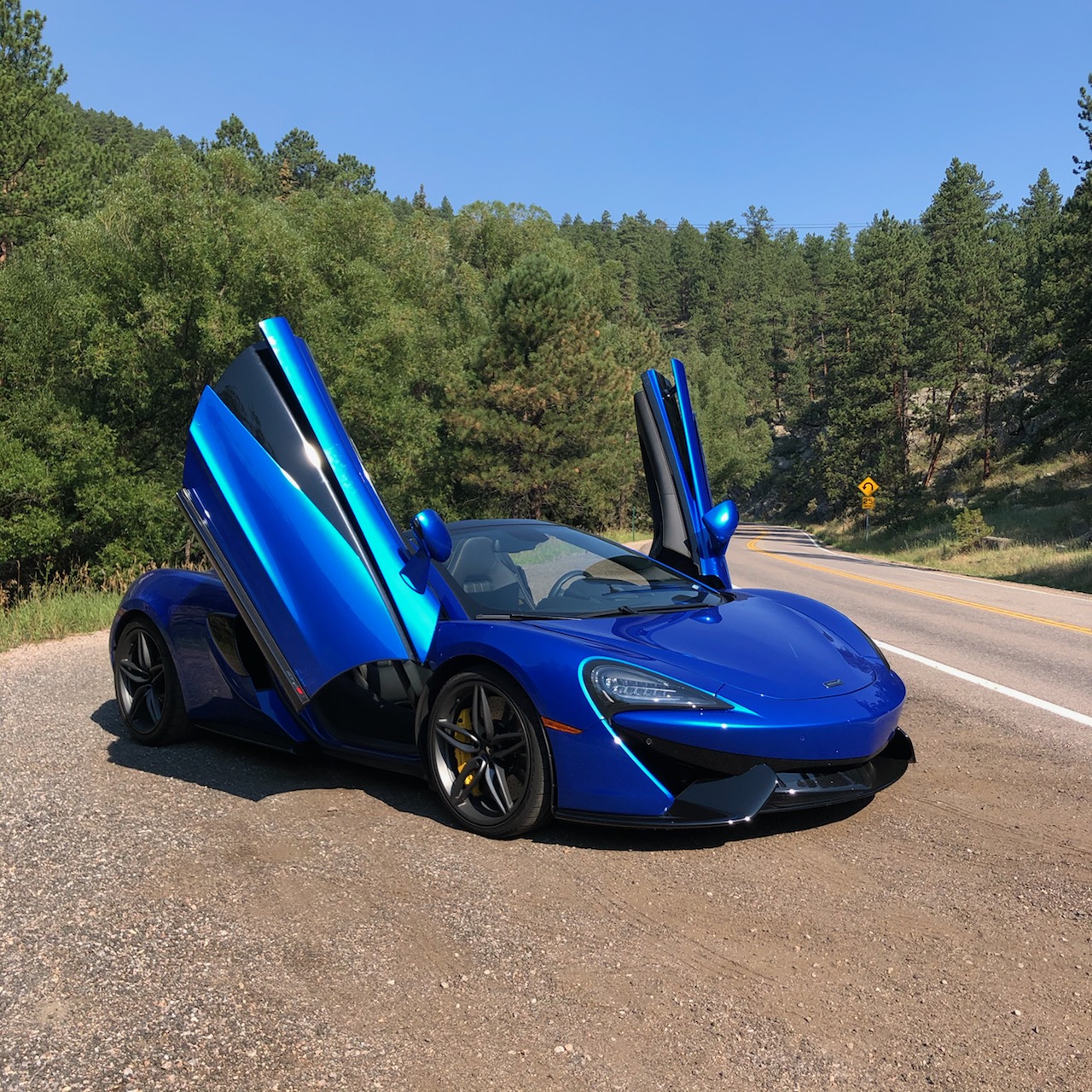 But before we get there, let's start with the exterior. Upon first glance, the 570S Spider in Vega Blue definitely catches the eye and raises eyebrows. From school-age children to older 60-something petrolheads, gawking and thumbs-ups are standard procedure. Some will ask, "What kind of car is that?", but the majority of people that can't resist to comment just nod and say, "Nice 570." When you lift open the 570's verticle doors, it completes the theatrical entrance or exit you're going for. So, in terms of sitting out front of Sushi Den on a Friday or Saturday night, the McLaren ticks all of the boxes.

Once comfortably inside the 570's carbon-fiber tub, the interior is delightfully minimalist, motorsports-y, comfortable, and functional. The center infotainment screen, while business-only in its appearance, is easy to use. The digital instrument cluser also feels very racey; though, I personally prefer the large analog tacometer of the older 650s. As for seats, I'm just over 6 feet tall (6-foot, 1-inch on the roster), and find the front buckets to be very comfortable. The driving position is spot on too—it almost feels like you're sitting in the center of the car. 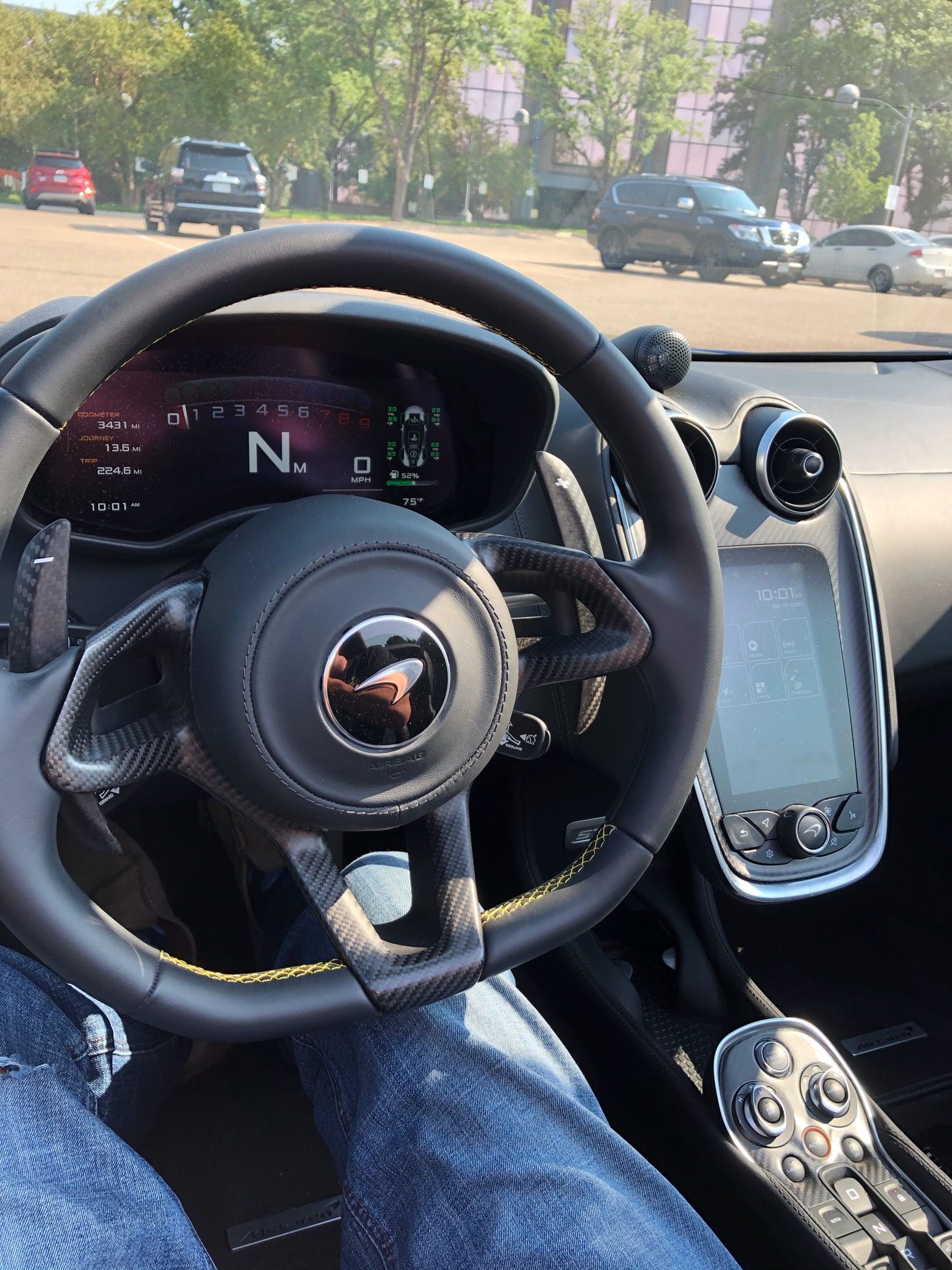 Starting the 562-horsepower, 3.8-litre twin-turbocharged flatplane-crank V8 never gets old. It's just the right sound at the right volume to elicit chills, fear, and excitement all at once. It's not reserved and polite, but it's not vulgar either—it's just unapologetically motorsports-y, and that, my car-loving friends, is a beautiful thing. Like other mid-engine cars, the McLaren's engine sits right behind the seats creating a joyous symphonic auditory experience.

When it's time to pull away, the McLaren is extremely easy to drive at slow speeds. A small toggle to the left of the steering wheel initiates a hydraulic lift for the front nose, meanwhile, the brakes and throttle are extremely easy to modulate, even in its most hardcore powertrain mode, which I left the car in for most of the time I had it. Shifts are abrupt but not jarring, and there's actually quite a bit of room in the front-trunk, or "frunk." The McLaren can hardly be described as practical or a grand tourer but, it's definitely suited for daily use and will even do 23 MPG on the highway with a light foot. 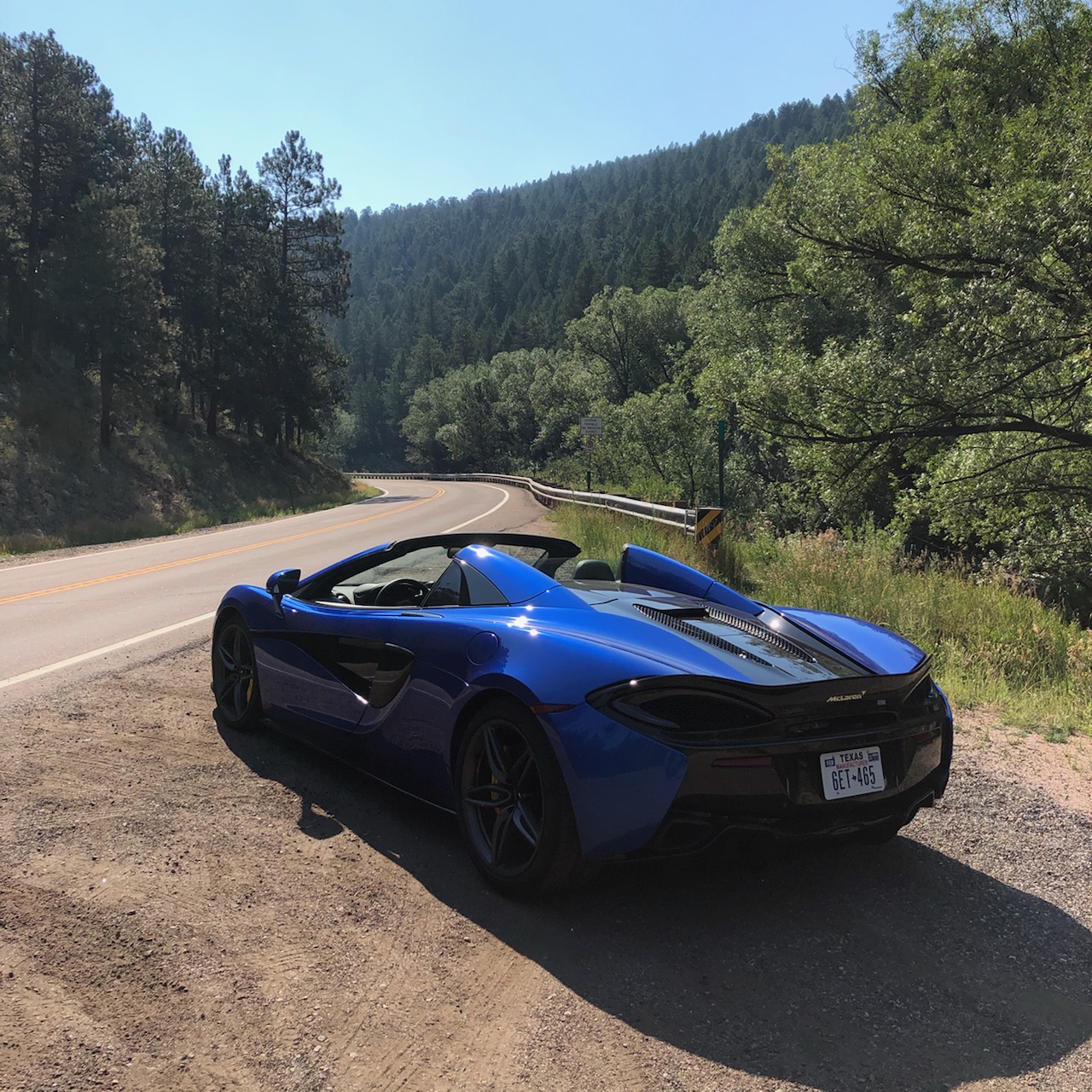 So, we get to the pressing question, how does it drive? In one word, transcendental.

With a 0-60 time of about 3-seconds flat and 0-100 in just over six, the McLaren puts the power down in ways best described at physics-bending witchcraft. From a roll, the turbos take a split second to spool but once they do it's neck-snapping acceleration that will take the take the breath out of you if you're not ready for it. Triple digits come fast on straight sections of mountain roads as the engine makes an intoxicating wooshing roar and the dual-clutch transmission snaps through the gears, but the McLaren's big six-piston, carbon-ceramic brakes make little fuss of bringing the 3,300-lb supercar down to corner-entry speed.

The steering is tactile and direct in ways that I've only ever experienced in a very limited number of cars and the handling is balanced, if not slightly playful, adding to the sheer terror and awe of the experience. No matter what driving mode you're in, the 570S Spider is a pure-bred driver's car that demands respect and rewards handsomely with blistering back-road pace and high heart-rates.

Sure, I'd like an analog tach, and I'd like to be able to better see the engine on the 570, and maybe the interior isn't as nice as some of the others—but beyond that, it doesn't get much better than this on the road. So go ahead, sell your house, sell all of your other cars, sell whatever it is that you need to sell to get one. It's bloody worth it!