Oil drips and faded paint: Redemption through a 4x4 collection.

I first met Josh through his Instagram profile. I had posted a picture of an old International Scout I passed by in a little town called Grant, Colorado. He was inquiring if it was for sale, and if I knew who the owner was. My short answer to those questions: not sure. Wanting to get to know him more, I took a quick scroll down his Instagram page and immediately came to the conclusion that we shared similar interests in vehicles. Looking through his pictures of Scouts, CJs, and Land Rovers, I could tell we were going to get along. We went back and forth a bit, and eventually, got to talking about his collection of vehicles. Realizing this was outside the scope of Instagram messenger, I wanted to get Josh on the phone and get to know him a bit, and find out where this passion for old 4x4s all started. 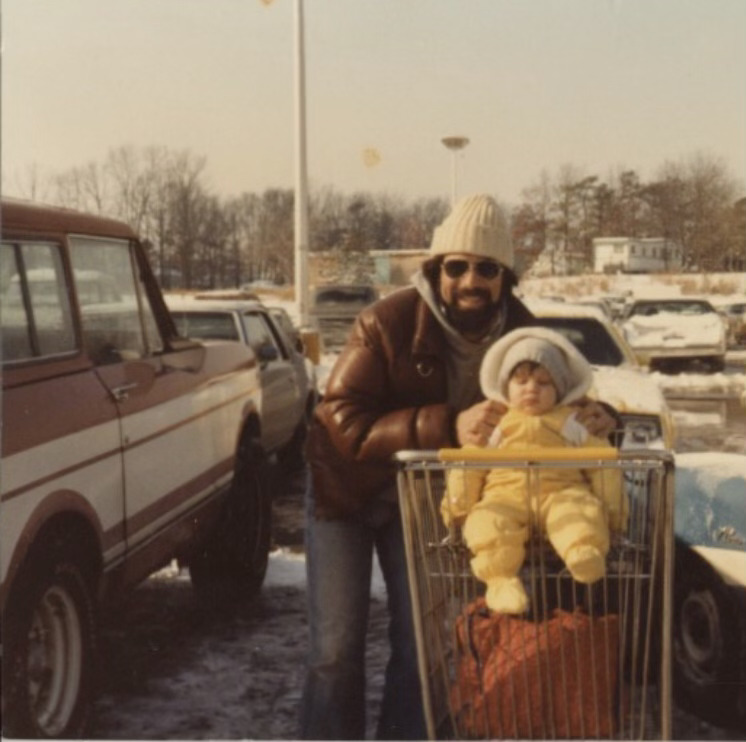 Josh, his dad, and his dad's International Harvester Scout

Like a lot of car guys, Josh's passion started at a young age. His dad owned both a 1979 CJ-7 Renegade and a 1979 International Scout II Rallye. For a lot of kids, your dad is your superhero. When your dad also drives a "cool" car, you feel like the king of the world driving around with him. I could hear the excitement in Josh's voice as he shared the memories of enjoyment. It didn't matter if it was climbing in and out of a topless, doorless, Jeep at a springtime soccer practice or unloading his hockey bag at the ice rink with a fully enclosed Jeep on a snowy winter day, there was always recognition from other kids and teammates. "Everyone wanted to ride with us" he chuckled. But it wasn't entirely the image these cars projected for Josh and his dad; it was the common ground of a simple 4x4 that started to form a bond between the two as they both battled tough times at home.

Through his dad's daily driving, Scouts and CJs made a lasting impression on Josh, but his dad soon introduced him to something new. At the age of 8 or 9, Josh recalled his dad taking him to the Atlantic City Convention Center for a classic car show. It was at this event that he first laid eyes on a Land Rover Series II.

"I had never seen a vehicle shaped and configured like that before," Josh said, and little did he know (again), this would become another connection that would last a lifetime. 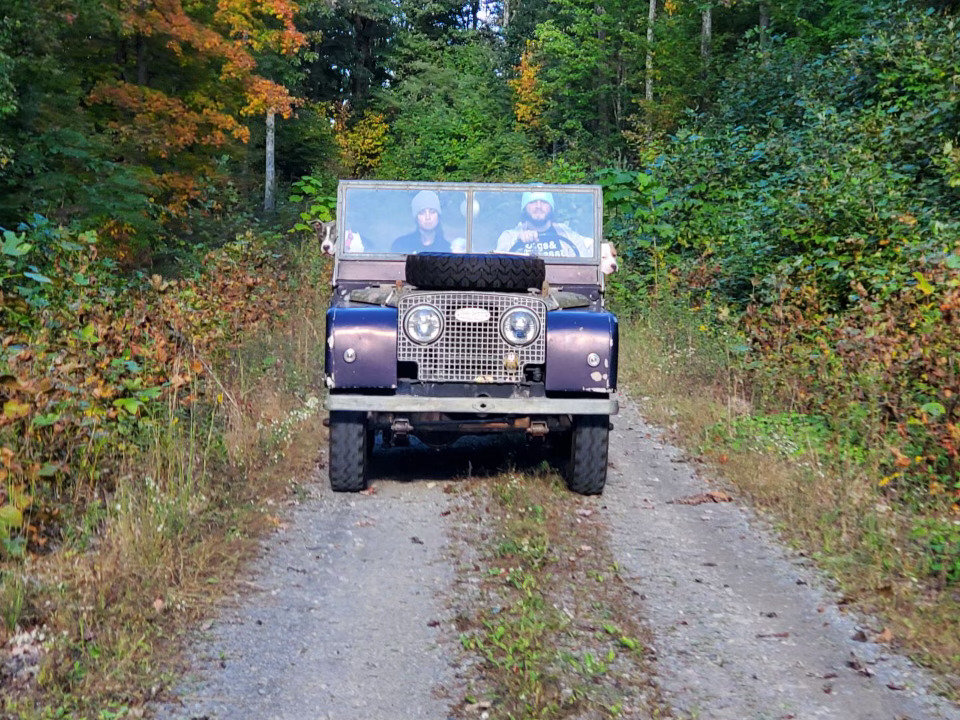 Like most teenagers with an automotive obsession, he started buying all the magazines and reading up on all the latest 4x4 offerings. It was on a drive through Northeast Philly that Josh's dad spotted a 1978 Scout II in a parking lot with a big for sale sign on the windshield. Two illegal u-turns later, and the Scout would find its way coming home with a father and son. The Scout II, with a stock rebuilt 345 motor, would last him through high-school, college, and beyond. He began to use those magazines (long before YouTube) for tinkering on it to pass time through the long east-coast winters and teaching himself basic maintenance. Josh ended up in South Florida with a career opportunity that would allow him to begin pursuing some of his childhood dreams and financing his hunts for patina'd classics.

The more we speak, the more I'm learning that Josh is similar to the vehicles in his collection. They show some wear, have some scars, but they are unique just like him. He mentioned a few times on our call that "you will never pull up at a red light staring at another one like his," and I believe that to be true for Josh as well. These vehicles build relationships and I suggest you get to know him too. 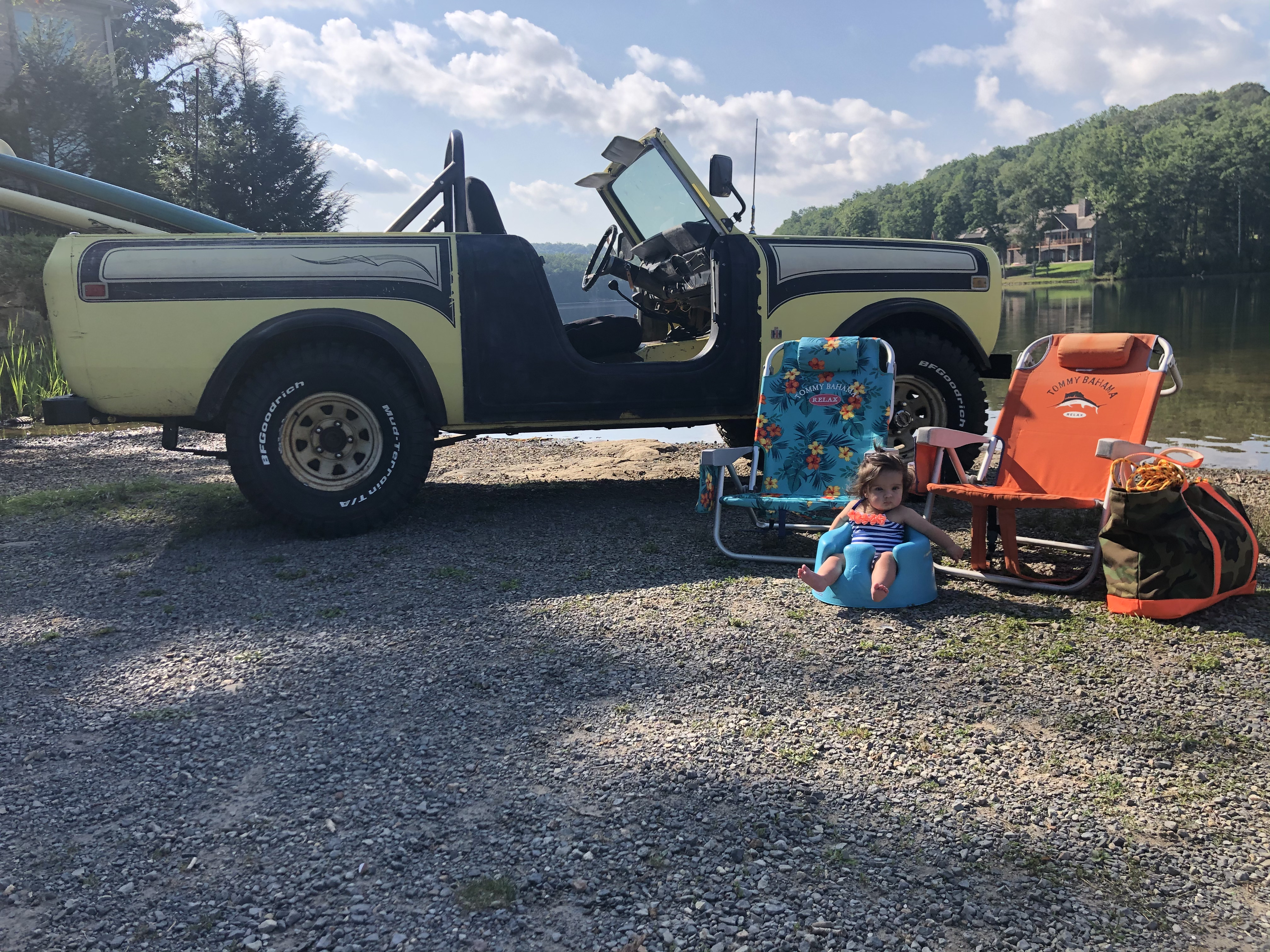 Josh has gone on to own a mixture of Scouts, CJs, and Land Rovers staying true to the vehicles he fell in love with as a kid. If you follow vehicle values at all, you know full well that all of these vehicles are soaring in value as more collectors and enthusiasts try to get their hands on a unicorn. For some of these people, it's about the image of owning something valuable, rare, and sought after. For others, it's finally buying the dream car of their youth. For Josh, it's a time capsule taking him to cherished moments with his father as a kid. It isn't so much the popularity of these vehicles and the attention they draw, it's about a bond that started to form between father and son and a vessel that helped them get through tough times together. 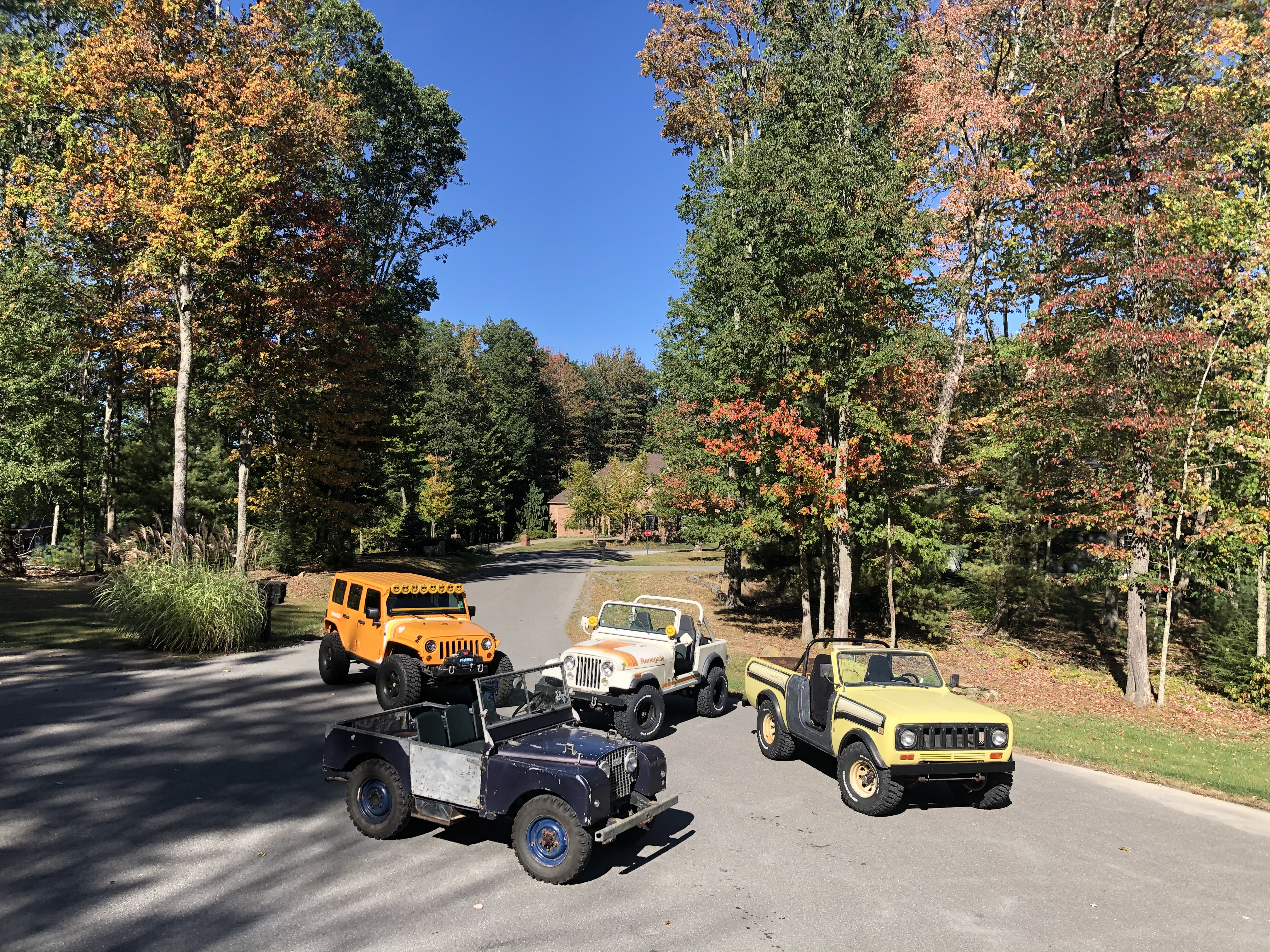 Some of Josh's current collection including his 2012 Wrangler Rubicon

Josh's current lineup is a 1979 International Harvester Scout SSII (which he bought from the original owner), a 1951 Land Rover Series I 80-Inch, a 1962 Willy's Jeep FC150 (another 1-owner find), a 1979 Jeep CJ-7 Renegade, and a 2012 Wrangler Rubicon. I scratched my head a bit at the last one, and it turns out, his boss didn't want him driving clients around in an old Land Rover. 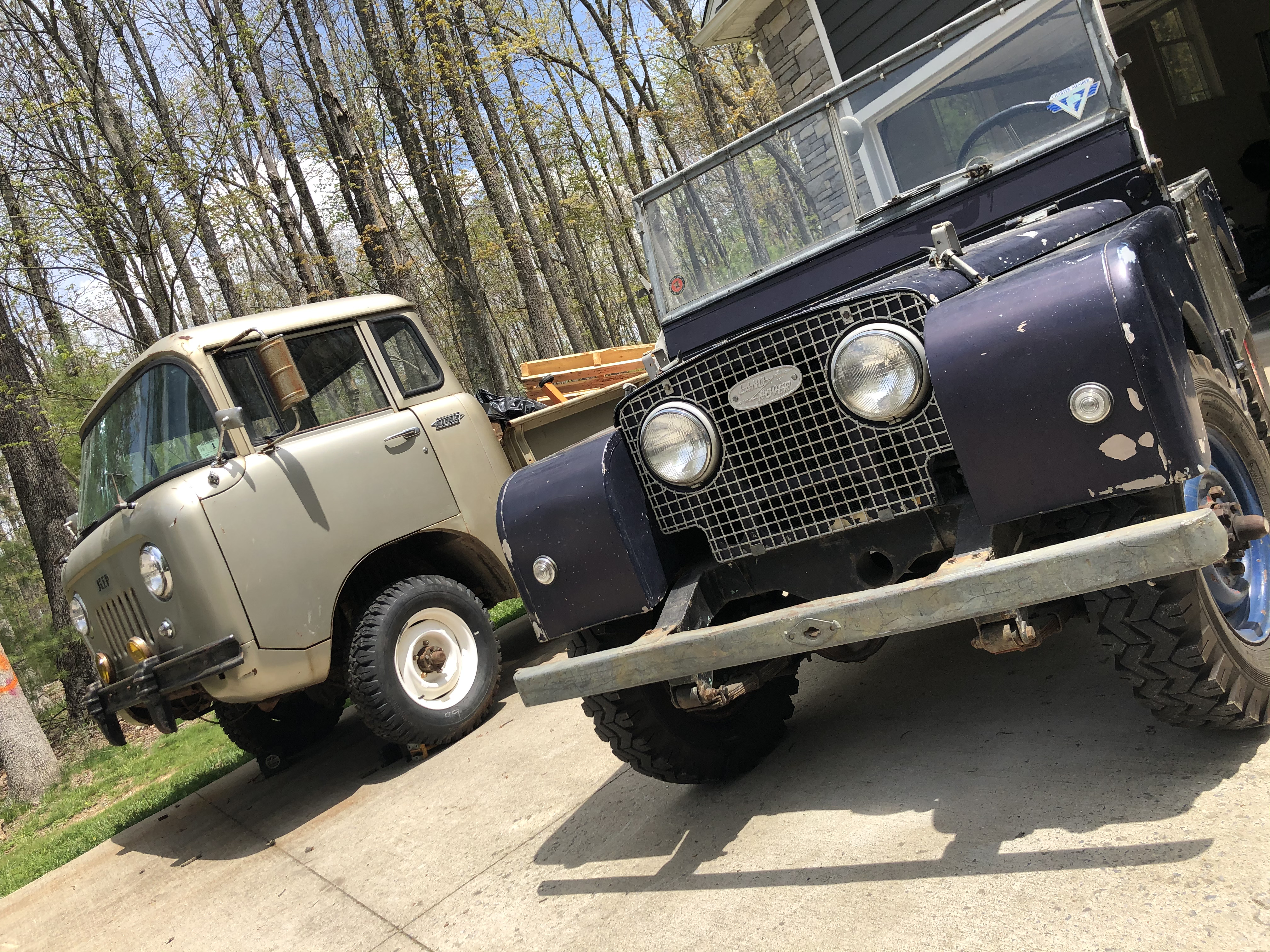 You might be thinking, why not Vortec swap this and why not repaint that? Josh's reply: "they are only original once." The original paint is exactly how he wants to keep his vehicles for as long as the elements will allow. He's thankful that companies are offering amazing restorations and getting extremely creative with resto-mod taking the hobby to whole new levels of greatness. It's great to see people adding elements that make for safe daily drivability evolving for modern highway speeds. Josh feels that the oil drips and faded paint add to the character and appeal of owning an old 4x4 so he will forever fight to keep them original outside. 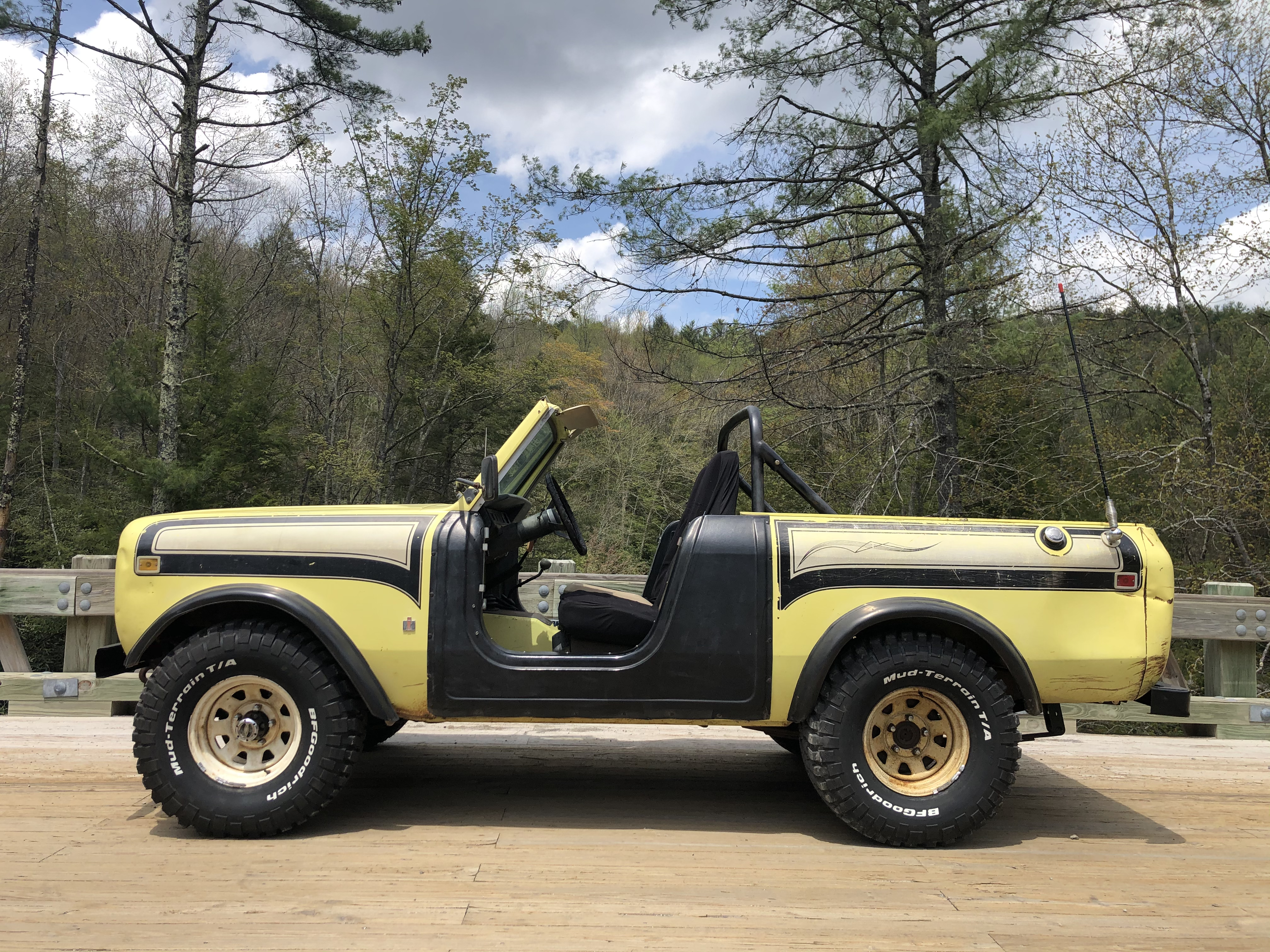 Josh's passion for vehicles resonates heavily in this quote: "The beauty of all these 4x4's is that they tell stories. They don't have to be rock crawlers, but they can be. They can be grocery getters, beach cruisers, or family trucksters. Don't let anyone lead you to believe these are strictly off-road vehicles. These are off-road "looking" vehicles that are capable of creating memories in any way you choose. These are family vehicles first and foremost for today's generation." Whether you're driving the kids to hockey practice, or wheeling somewhere in the Rockies, enjoy your vehicle for what it is, and make it your own.

Us car guys are always on the prowl looking for vehicles, and before I hung up the phone, I had to ask him if he had anything else coming soon. He kept his cards close, but he did tell me he is close to a deal on an original paint 1-of-1 vehicle, and less than 200 were ever produced. He will also be putting in some work on the FC150 with the support and knowledgeable skillset of Cory at Pioneer 4x4 located in Chattanooga, Tennessee. The FC-150 had been missing a motor when purchased, but with Cory's fabrication skills, it will be driving like new on a 1997 Jeep Wrangler TJ frame, suspension, and driveline while maintaining the original paint, and a few of Josh's creative twists on the build.

You can follow along on his Instagram page for all things Scouts, Jeeps, and Rovers. You can also find me, Blake, over on OCN_Rigs on Instagram, and be sure to check out our videos featuring classic and modern 4x4's and their owners.