OCN Rigs: Kelly Lund Does It Again With Yet Another Toyota Build

OCN Rigs: Kelly Lund Does It Again With Yet Another Toyota Build

Kelly Lund has a knack for taking ordinary late model Toyota's and turning them into unique and capable off-road rigs, ready to take on any backroad in the American West. We recently featured him and his 2017 Toyota 4Runner, and when I found out he was transforming his 2013 Toyota Tundra into a camper, we had to get him back on for another feature. 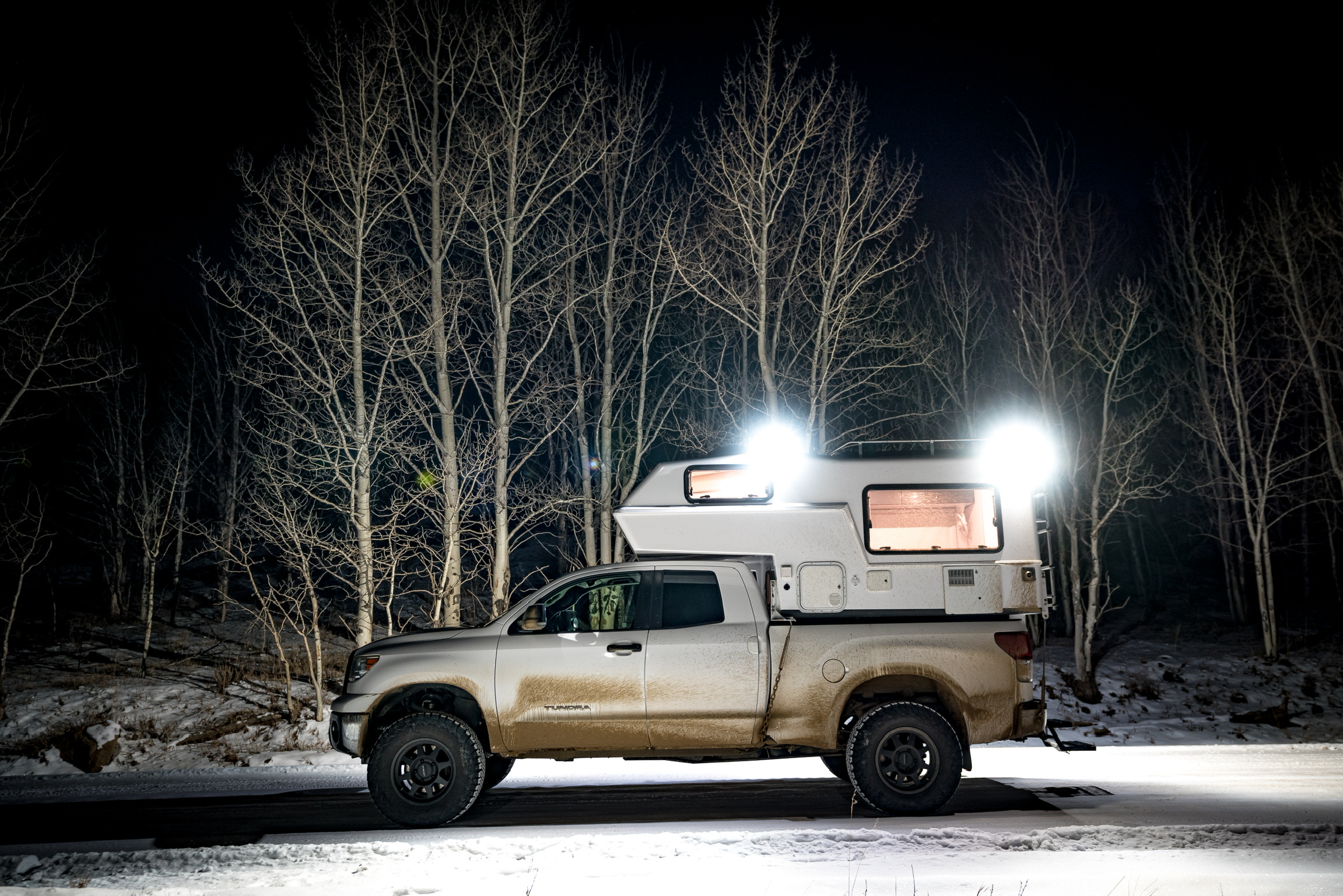 Kelly has actually owned the truck for a while now, but the camper is a new addition. Both truck and camper have recently gone through an extensive overhaul. When he bought the truck awhile back, it was a work spec with steel wheels and highway tires. He quickly got to work modifying it with better suspension, wheels, tires, a camper shell, a drawer system in the bed, a heavy-duty roof rack, and a rooftop tent. He then ventured from Colorado to Alaska in it. As he began modifying his 4Runner, the Tundra didn't see as much action. That is until about a year ago. Kelly found the camper of his dreams, a 2003 Northern Lite 6-10, and took off up to Washington to pick it up. 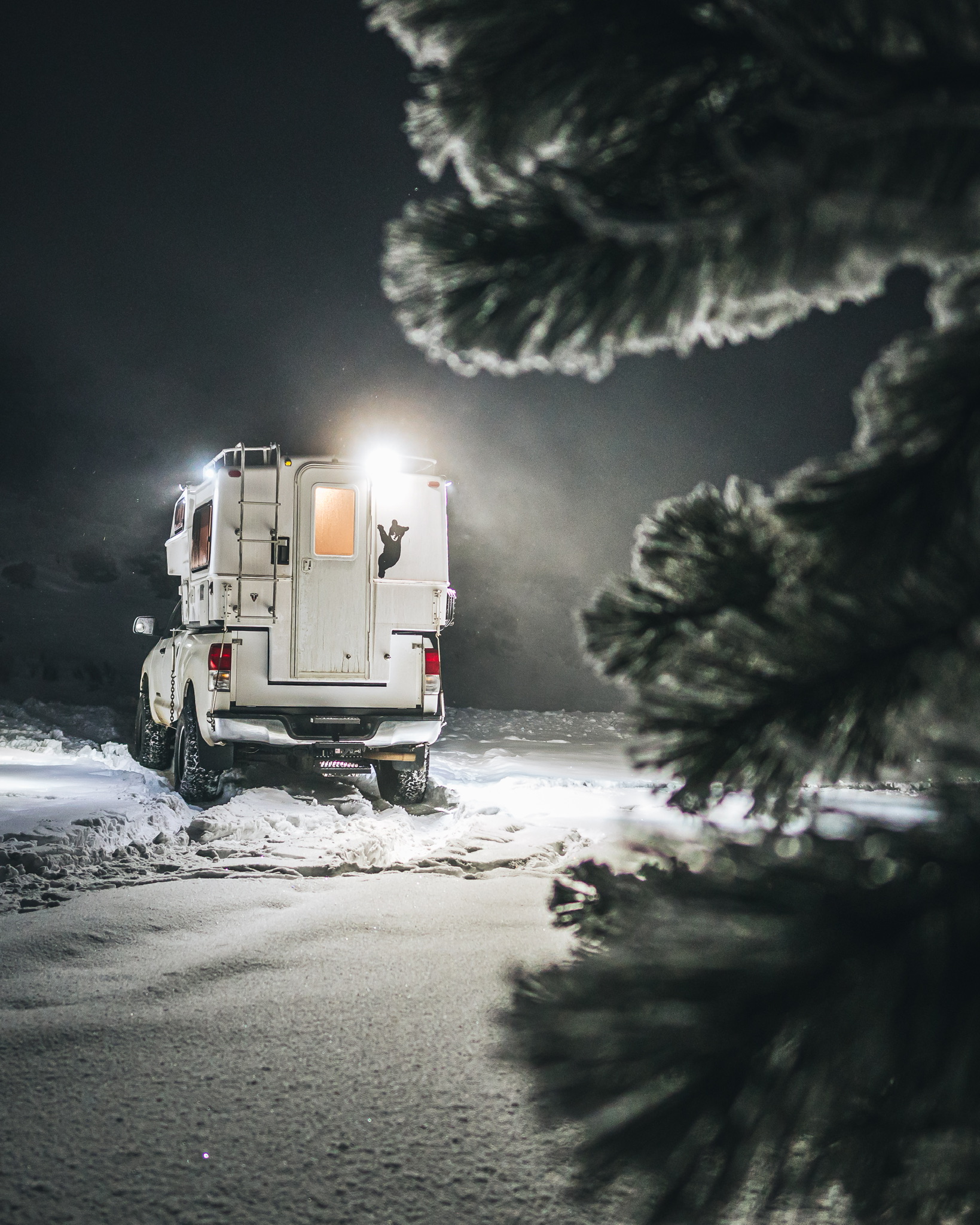 Then began the camper's extensive restoration. Kelly went to work on it with the help of a Denver based adventure vehicle outfit called Featherbuilt. The two gutted and remodeled the camper both inside and out. To make it more livable inside, the camper can run on propane to keep warm in the winter, features a sink from Dometic, a 20-gallon water tank, 3 lithium Battle Born batteries, a fan from Dometic to help with airflow, and much, much more. For interior cosmetics, Kelly found some whimsical wallpaper from Etsy, enhanced the windows that now fold out and feature a sunshade, added cabinetry throughout, added leather upholstery on the couch, a swiveling kitchen table, and even installed engineered hardwood flooring. 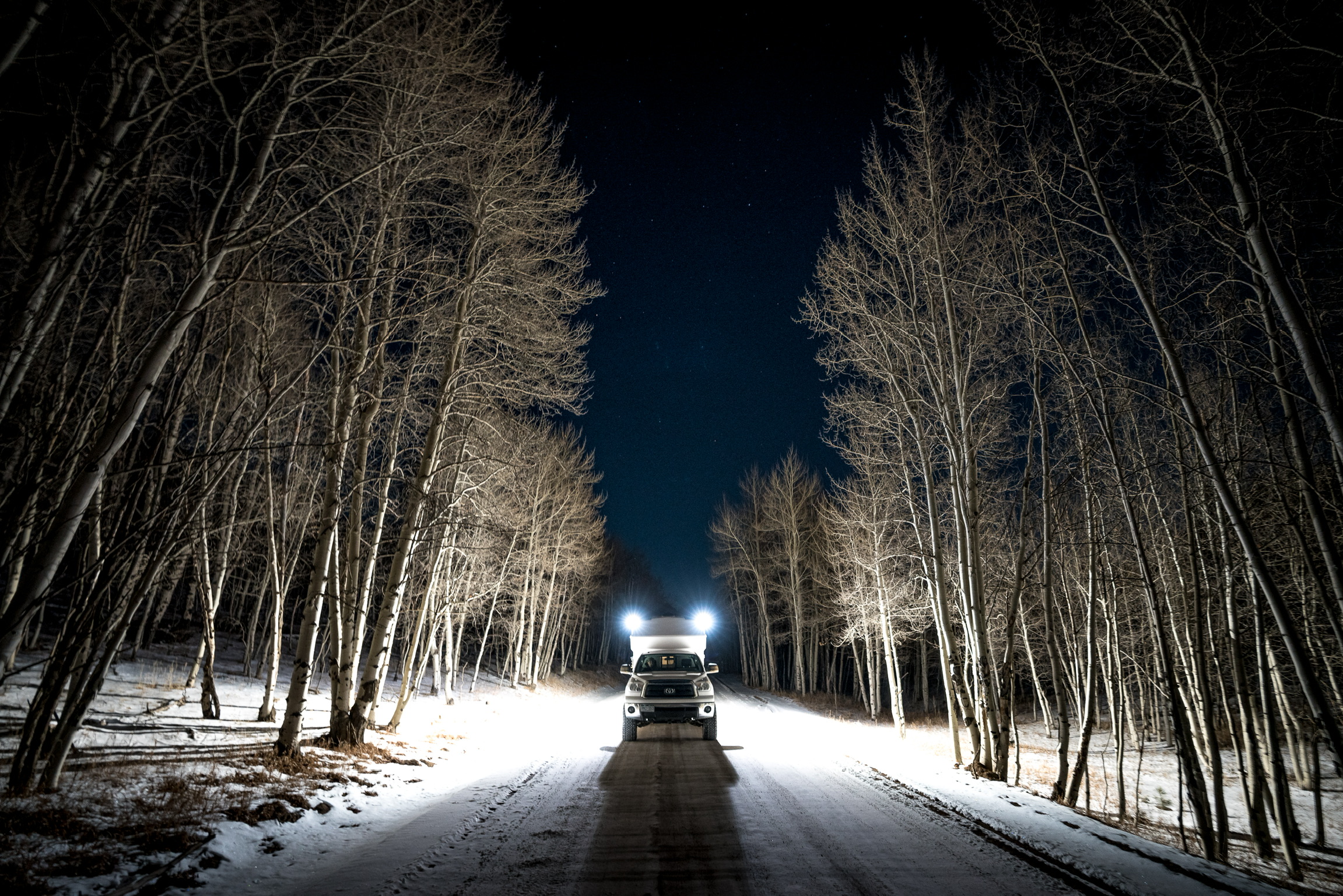 Adding all this weight with the camper, the truck needed to be revamped as well. For the suspension up front, Kelly went with Camburg UCA's and Fox 2.5-inch adjustable shocks. For the rear, he's got an Icon leaf pack, as well as Firestone airbags with a Daystar air bag cradle. For wheels and tires, Kelly went with 18-inch Method 701's wrapped in 35-inch BFGoodrich KO2's. Normally he'd go with a 17-inch wheel, however, there is something that can happen with campers on the highway called "tire sway" which causes the truck to get a bit wobbly. 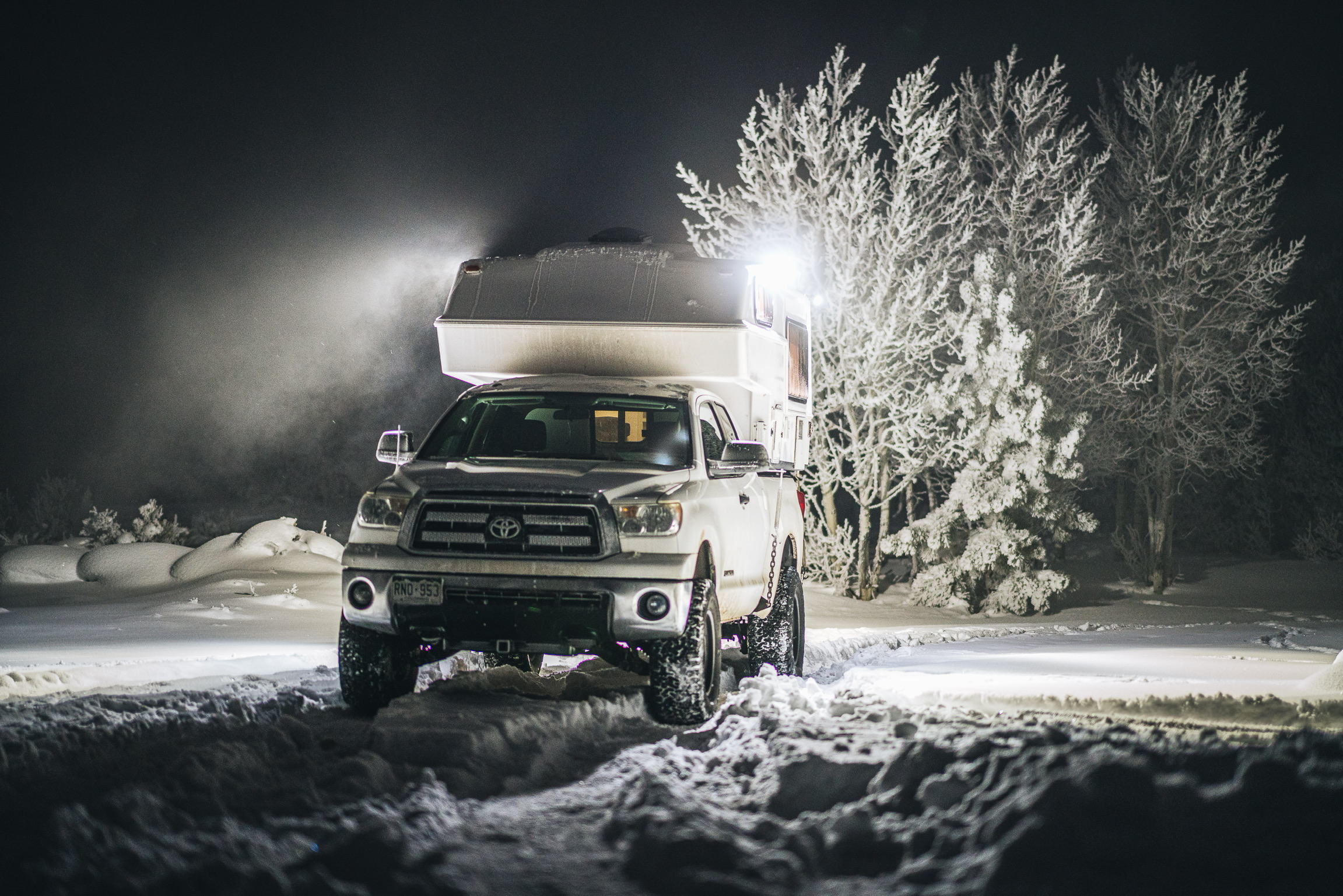 The camper itself is actually made for smaller trucks like Tacoma's. Kelly needed to build a platform in the bed for the floor of the camper to sit on. He built the platform out of steel, bolted it to the bed, covered it with plywood, and then built in drawers within the platform to have added space for tools or snowboards. Exterior lighting was a must as he tends to keep on driving into the night until he finds that perfect spot to camp. He's got 6 Baja Designs S1's all the way around. This helps to illuminate the campsite itself, but also helps to spot any hidden hazards lurking in the night. 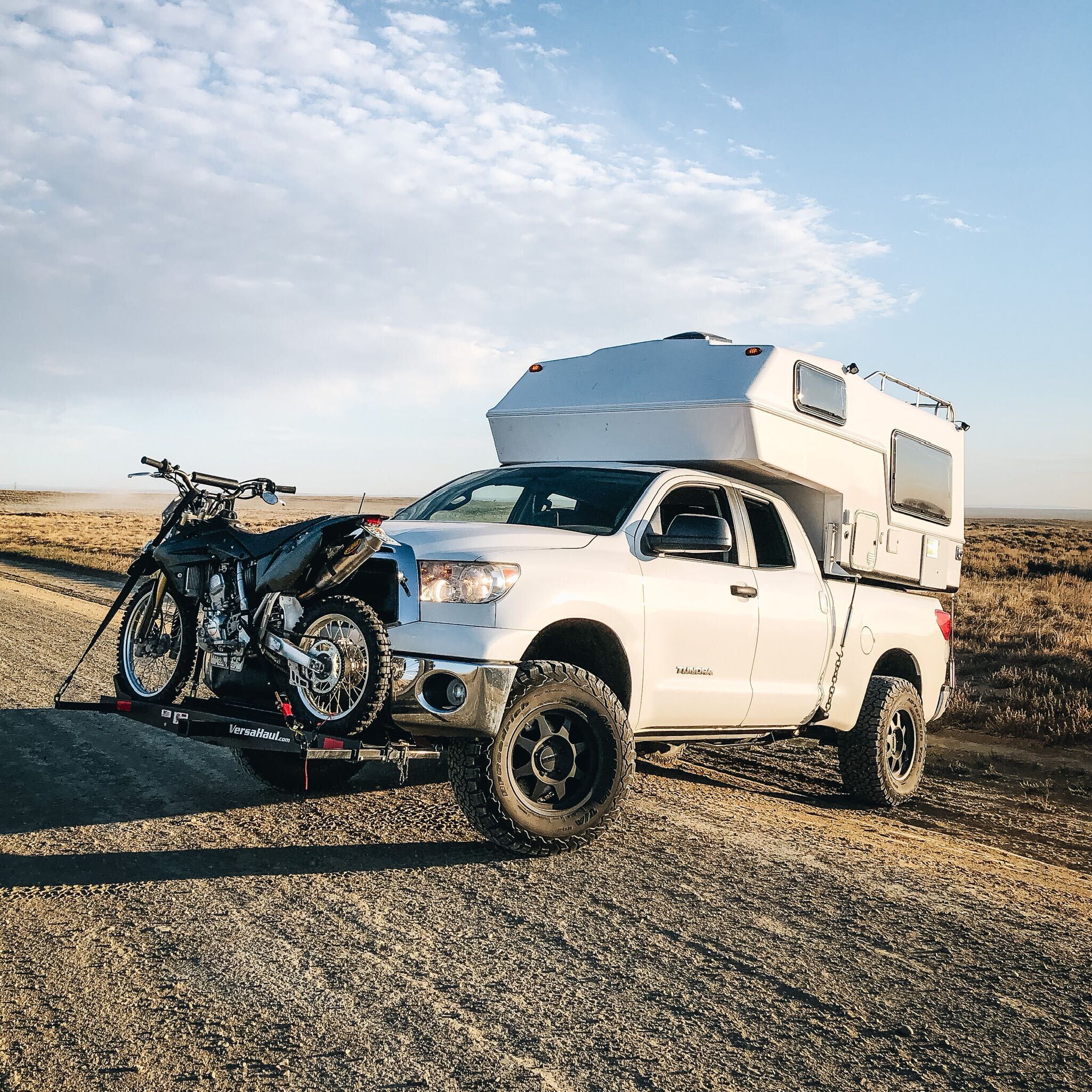 So how has the truck handled the massive transformation? According to Kelly, with the exception of a few minor maintenance items that happen on aging trucks, the whole setup has been great and the truck handles it well. When building out a camper like this, there are a ton of different platforms to choose from as the truck market in North America continues to explode. All these trucks offer various trim levels with big V8's and Turbo Diesels and each of them make a strong case to build on. The appeal of building on a Toyota platform is the fact that these trucks just keep going. They will not get you there in a hurry, they aren't very flashy, but they just keep going, and I imagine Kelly's will continue to take him to those hard to reach campsites for years to come.

*All photos courtesy of Kelly Lund.

For the full in-depth tour of Kelly's Toyota Tundra Northern Lite Camper build, check out our video with him below. Be sure to follow along on his travels on Instagram. For more rigs like these both classic and modern, fast and slow, follow us on Instagram and watch our full lineup of videos.