The North American truck market is as boisterous as ever. If you're looking to get into a full or mid-size truck, you've never had more options than you do today. The Tacoma that once dominated the mid-size market now has to compete with the Colorado, Ranger, and Gladiator, to name a few. Up in the full-size market, the F-Series, Sierra, Silverado, Ram, Tundra, and Titan give you PLENTY to choose from. Not to mention, the various trim levels within those models. So how do you go about deciding which is "best?"

Let me give you the answer by asking you another question, "Which is best, for you?" Really, it boils down to preference. If you're looking to rip through the desert at high speeds, then the Raptor or newly-released Ram TRX could be a good option. If you're looking to build out a mountain camping rig you plan on owning for years, then the Tundra may be right for you. If you are indeed leaning towards the latter, then by the end of this article you might just land at your nearest Toyota dealer or local Craiglist deal. 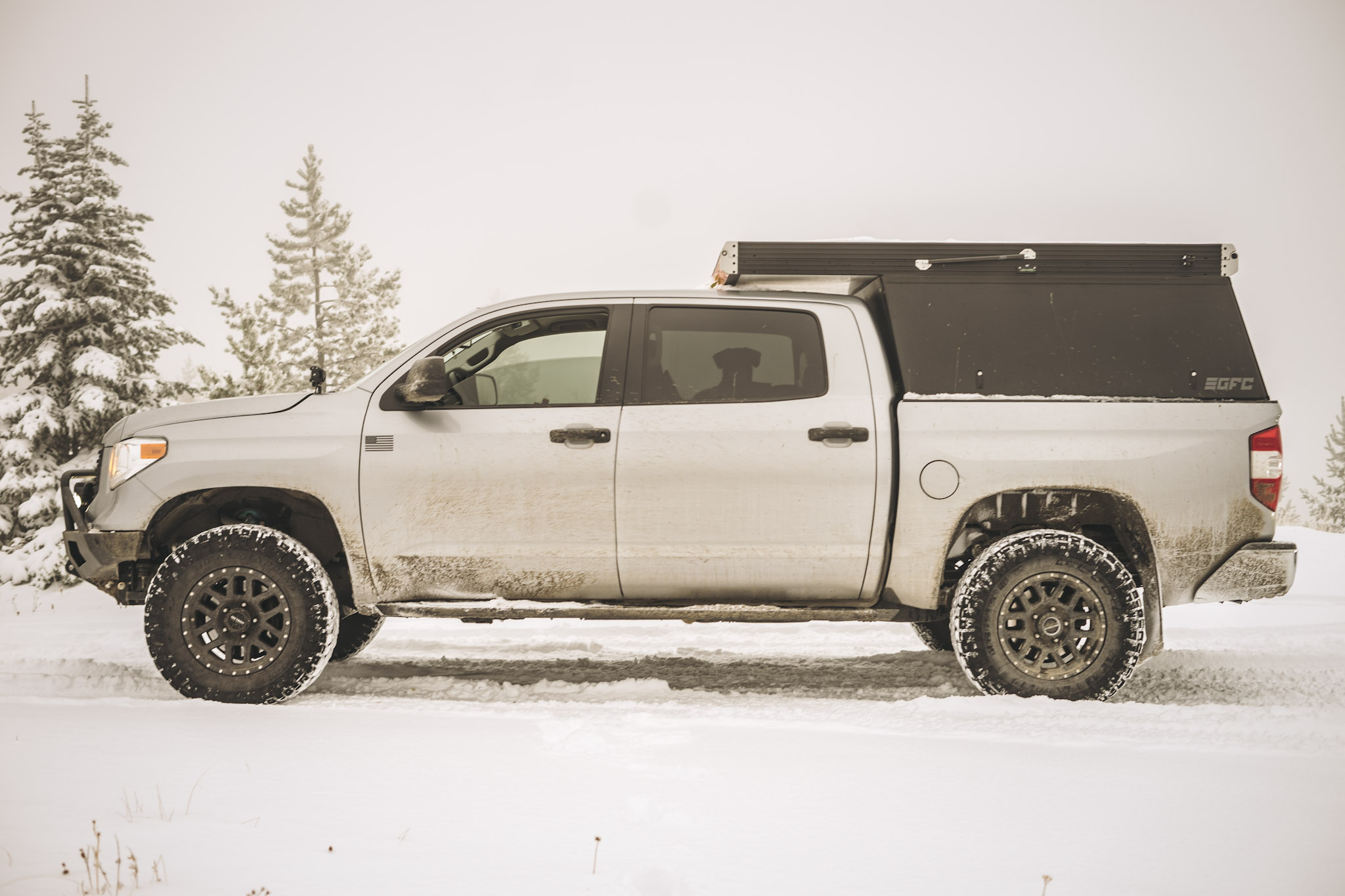 I met Austin through his Instagram page, and quickly took a liking to how he had built-out his Tundra. Austin is a Naval Flight Officer or NFO for short. He put it simply as: "Think Goose from Top Gun." His profession has allowed him to live on both sides of the U.S., previously in Washington and currently in Florida. When buying a truck, he wanted something that could tackle snowy mountains, sandy beaches, and the occasional southern mudhole. He bought the truck new back in 2016 as a bone stock 2017 Tundra SR5 from a local dealer his dad oversaw as a GSM. Having a lot of future plans for the truck at the time, he began building it from the ground up. Keep in mind, when you know you'll be adding bumpers, larger tires, a tent, and additional gear, you'd better start with the suspension to help support all the added weight, make room for the tires, and get the truck off the ground so it can get to more remote campsites.

Austin went with 2.5 inch King coil overs and shocks, both front and rear. Added leaf springs from Deaver in the rear with an additional leaf spring to support the added weight that was to come. To top it off, he added upper control arms from Total Chaos Fabrication as well as Total Chaos shackles. For wheels and tires, he went with the 18-inch Method 306 wrapped in 295/70/18 Nitto Ridge Grapplers. 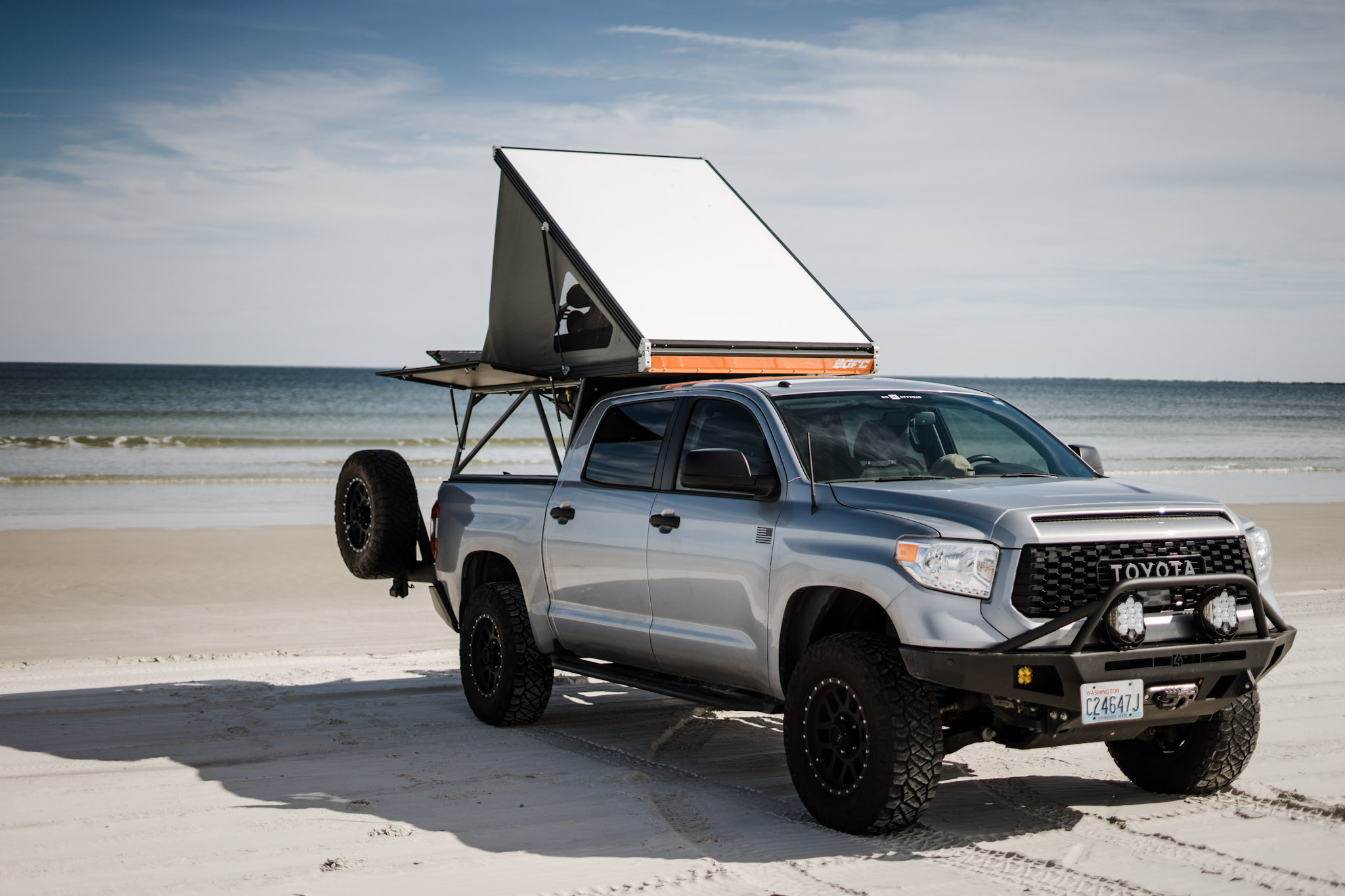 Armor was a must as he has taken this truck across diverse terrain in Washington, Moab, and the beaches in Florida. Bumpers are a great way to protect the truck, provide better approach and departure angles, and give the truck a meaner look overall. The front bumper is from C4 Fabrication, and the rear swingout bumper is from Expedition One. The inevitable weak spot of a full-size truck is a long wheelbase. This exposes the truck to a lot of obstacles to get hung up on and could do damage to the rocker panels. Austin solved that problem with a set of sliders from Victory 4x4 and added a bit more protection underneath with an engine and transfer case skid plate from RCI. 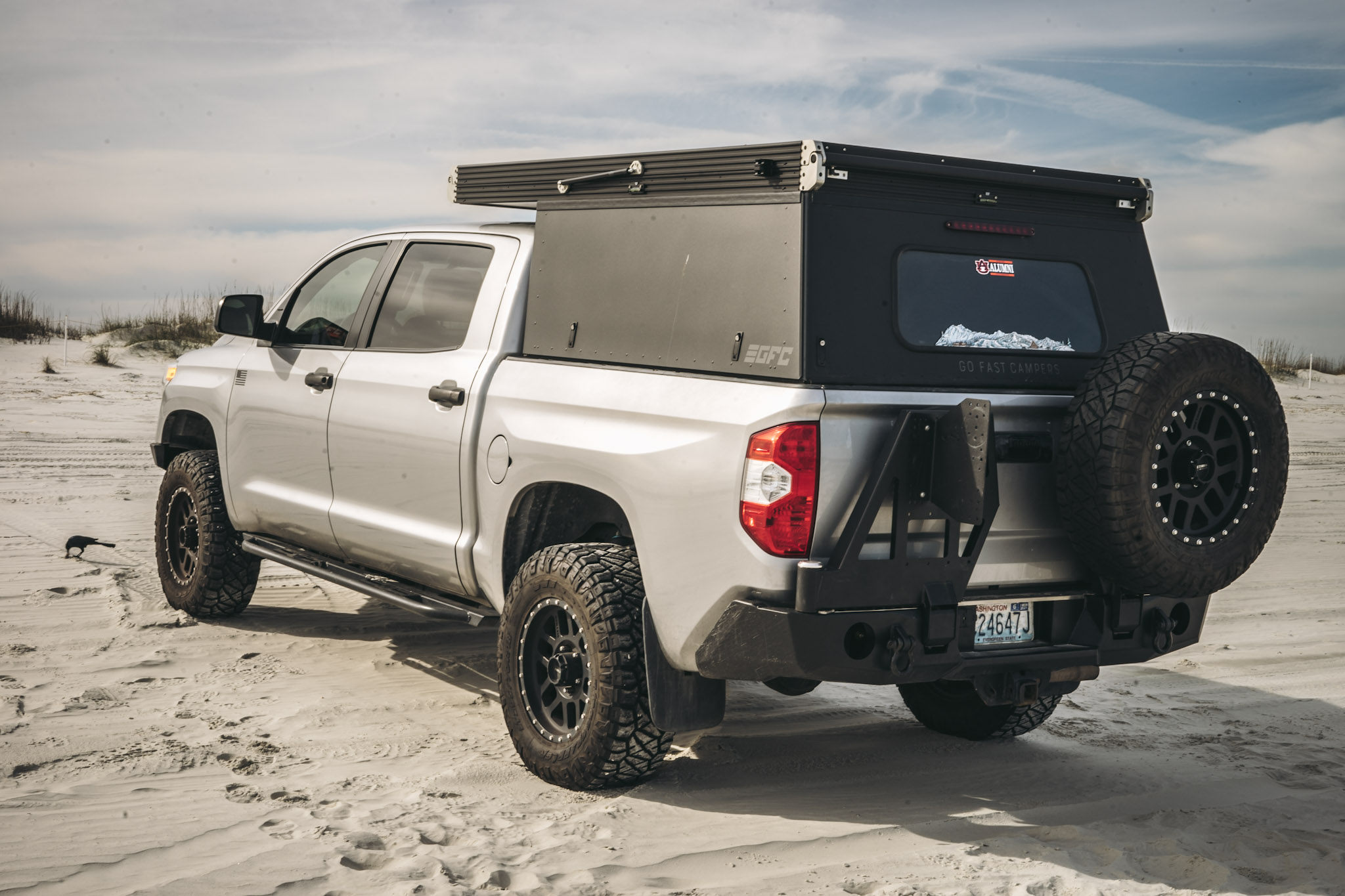 Admit it, none of us are skilled enough to never get our rigs stuck and even if we were, we'd probably still push the truck past its limits and need to get "unstuck." For recovery gear, Austin went with the 12.5k winch from Smittybilt equipped with a synthetic line, as well as a fairlead and ultra hook from Factor 55. The funny thing about winches is you think you're gonna use them more than you ever actually do, but when you do need it, they are a must. 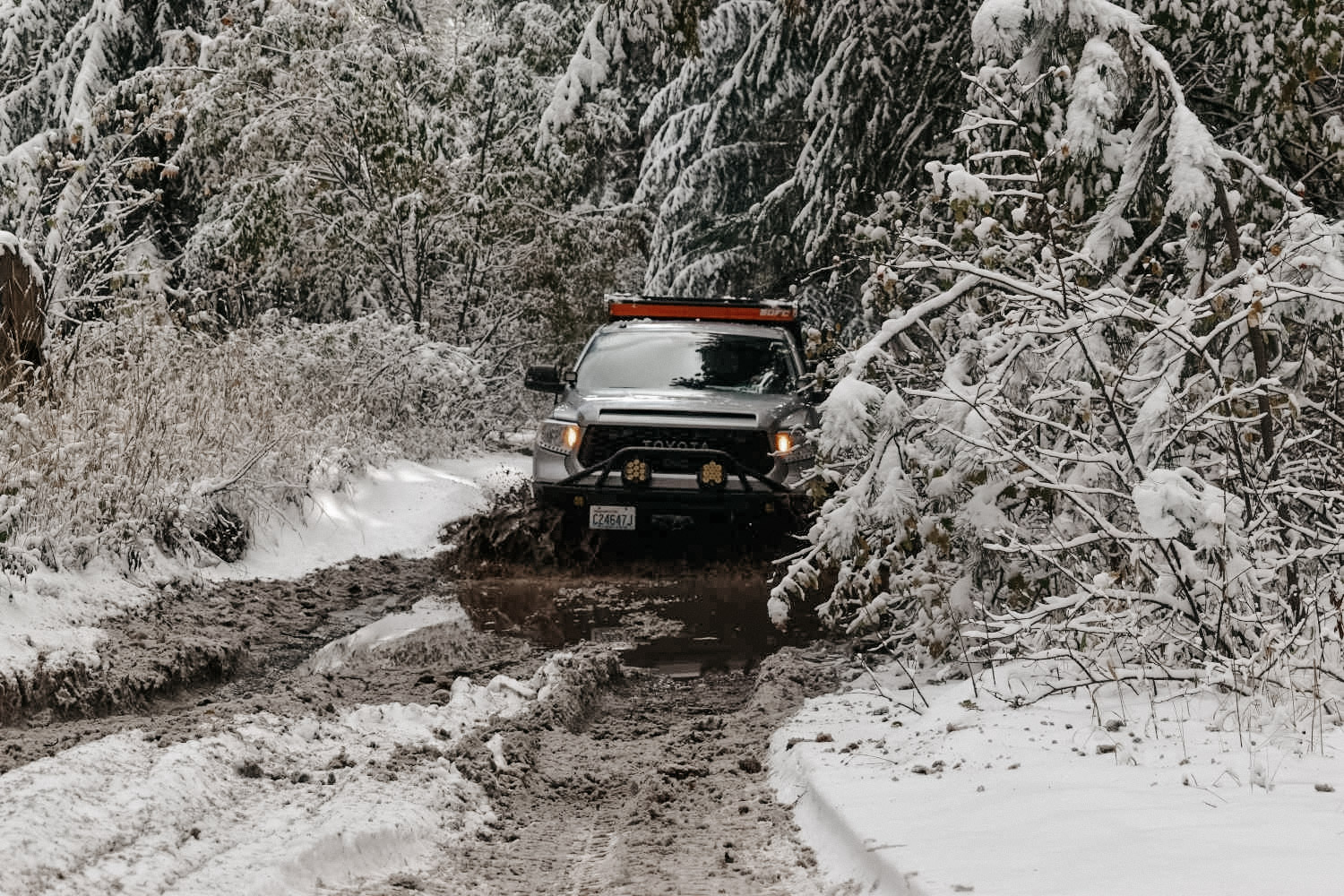 To round out the build, Austin went with a GFC Camper XL. The guys at Go Fast Campers know how to make one heck of a tent. It's lightweight, durable, and adds a lot of functionality to the Tundra to have a covered bed that can house more gear in the future and on long trips. If you're going to be wheeling at night or driving long distances in the truck, lights are a must. As you travel to more remote places they add light to a campsite or help maneuver around obstacles at night. He runs Baja Designs LP9 Sports mounted on the front bumper, Baja Design Squadron Sport Amber lights in the bumper, and Avec Offroad ditch lights up on the hood near the side-view mirrors. All these lights are hooked up to sPOD with the control panel mounted up in the sunglasses holder. 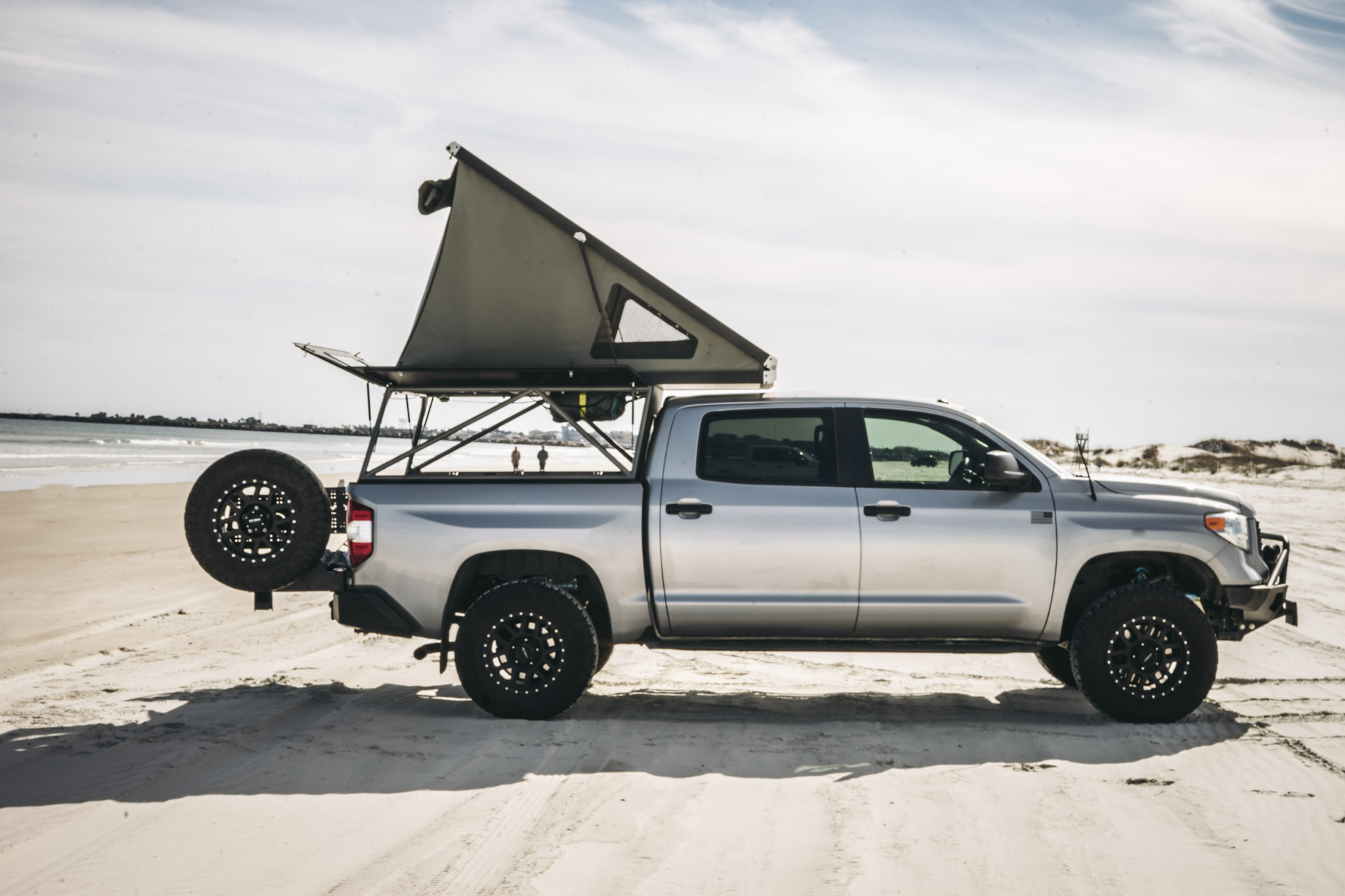 So what's a cool truck with all this gear if you don't get out and enjoy it? Austin has camped in this truck on a 9-degree night in the backcountry of Washington, driven on the sunny beaches in Florida, and even took it on Moab's Hell's Revenge with his brother. I think that answers the question of "is the Tundra a capable truck worthy of building out?" Yes. With any full-size truck, it'll have the inevitable weak spots of a long wheelbase and wider body, but Austin's is a testament that you can take this truck just about anywhere you'd like to.

You can follow his travels and build over on his Instagram Page. For all things 4x4 both classic and modern, fast and slow, follow us on Instagram and check out our in-depth video tours.