In honor of Opening Day and the fact that spring has finally arrived here in Maryland, this month, we're talking baseball! Long-time contributor to the Baltimore Sun Kevin Cowherd has just released a new book about one particular and very different baseball game that occurred back in 2015.

This month's book is: 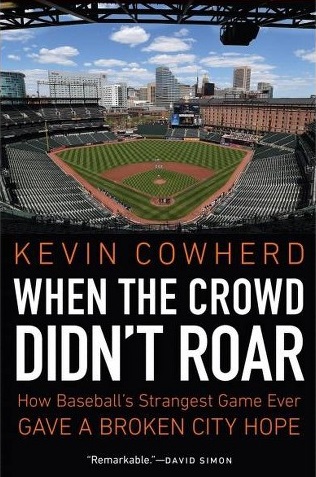 When the Crowd Didn't Roar
by Kevin Cowherd

The date is April 29, 2015. Baltimore is reeling from the devastating riots sparked by the death in police custody of twenty-five-year-old African American Freddie Gray. Set against this grim backdrop, less than thirty-six hours into the riots, the Baltimore Orioles and the Chicago White Sox take the field at Camden Yards. It is a surreal event they will never forget: the only Major League game ever played without fans. The story comes vividly to life through the eyes of city leaders, activists, police officials, and the media that covered the tumultuous unrest on the streets of Baltimore, as well as the ballplayers, umpires, managers, and front-office personnel of the teams that played in this singular game, and the fans who watched it from behind locked gates. In its own way, amid the uprising and great turmoil, baseball stopped to reflect on the fact that something different was happening in Baltimore and responded to it in an unprecedented way, making this the unlikeliest and strangest game ever played.

Though I remember the riots and the turmoil, I don't remember a single thing about this game. I don't even remember hearing about it happening at the time. That's exactly why this book has sparked my interest. How could I have missed this? It seems like kind of a big deal. Of course, as a fan of the Orioles who has seen her fair share of games at Camden Yards, I also can't imagine a game without a roar of the fans. Let's face it -- we here in Baltimore love our O's, and we tend to get loud at games. It's hard to even fathom a run or an out happening without a cheer or a jeer.

I've also been a fan of Kevin Cowherd's writing for almost as long as he's been at the Sun. He's clever and sardonic. He also seems to love Baltimore and celebrates that love through the stories he chooses to write. I think if anyone can do this story justice, it's him. He has a unique outlook, that will surely bring the story to life. While the events leading up to the game were grim, I imagine he'll focus on how Baltimore was able to rebuild and come together in the years since.

2. Are you happy to finally see baseball season start, or are you just hanging on until the Ravens (and the 31 other teams) start their season?

3. What's one thing you love about the city of Baltimore? The city sometimes gets a bad rap, but there are so many things to love about Charm City!

Check back on April 30 to hear what we thought, and to hear if others enjoyed this brand new title!