Late last month, it was announced that Maureen Beebe had passed away at the age of 81. Maureen was a local celebrity in Chincoteague, Virginia, as she was the little girl portrayed in Marguerite Henry’s 1947 classic Misty of Chincoteague. Though the book is fiction, Maureen and her brother Paul were real and featured prominently in the Virginia-based story. Even the two ponies featured were based on real ponies residing in Chincoteague at the time.

As Henry’s book has become a classic over the years for children and adults alike, I thought it would be fun to share the story of Misty this month. June is the start of summer after all, and what better thing to do in the summer than visit ponies at the beach? June’s Great DMV BookClub selection is: 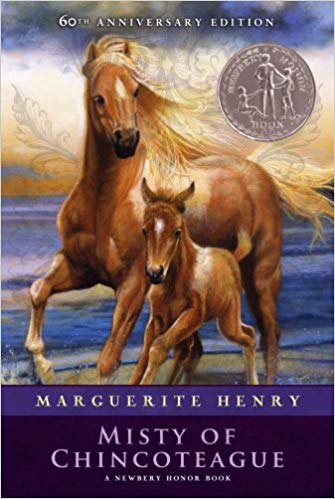 Misty of Chincoteague
by Marguerite Henry

Nobody could capture the Phantom. She was the wildest mare on Assateague Island. They said she was like the wind, that the white "map" on her shoulders was her mark of freedom.

Paul and Maureen Beebe had their hearts set on owning her. They were itching to buy and tame her, and worked hard to earn the money that she would cost. But the roundup men had tried to capture her and for two years she had escaped them....

Pony Penning Day holds a surprise for everyone, for Paul not only brings in the Phantom, but her newborn colt as well. Can Paul and Maureen possibly earn enough to buy them both?

The ponies at Chincoteague (and at Assateague) are always a big draw for families in the area throughout the summer. I have memories of heading to the beach and making a stop at Assateague to see the horses up close – though not too close; they are wild after all. It’s beautiful to see them just wandering around the dunes, enjoying their time at the beach.

I think that’s why Henry’s book has resonated so well with people over the years. She captured so wonderfully that feeling of seeing the horses and ponies for the first time in that beautiful seascape that is the Virginia coastline. For children that read the books, they’re getting a chance to imagine the sight, maybe without having the chance to see it in real life just yet. And for adults, they have the chance to relive the first time they witnessed their beauty, and in many cases, share that with their children.

Though I’ve never read Misty of Chincoteague, I have read Brighty of the Grand Canyon and loved Henry's style of writing and her attention to detail. So join along as we discover (or rediscover as the case may be) the beauty of the ponies of the Chincoteague and Assateague beaches.

1. Have you ever visited the horses at Chincoteague or Assateague? What was it like?

2. What other “natural wonders” would you recommend for out-of-towners in the DMV area?

3. Would you be more willing to visit animals in the wild like this or would you rather visit them in zoos or conservation parks?

4. Are there any other nature or animal books that you just love, whether the books are geared toward children or adults?

Misty of Chincoteague is available anywhere great books are sold. And join us on Tuesday, June 25, to hear what we thought about this page-turner!