Restaurant owner José Andrés has opened a D.C. emergency kitchen for people affected by the shutdown!

Celebrity chef and D.C. restaurateur José Andrés made news a couple weeks ago when he announced that his restaurants would offer free sandwiches to furloughed government employees during the shutdown. Now he's taking his generosity even further: He is opening an emergency kitchen for federal government employees who are struggling during the shutdown. 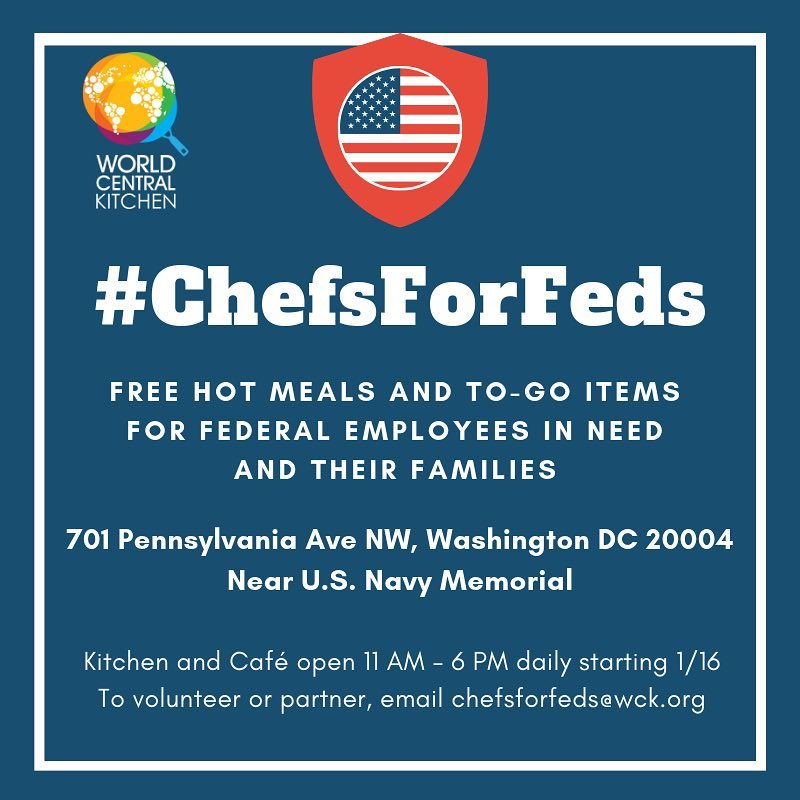 Not only will the #ChefsforFeds kitchen offer hot meals for government employees (who show ID), but it will also provide ingredients and recipes for them to take home, though there's a chance that the take-home supplies won't be available on the first day.

This food kitchen is not Andrés' first rodeo by any means. After the 2010 earthquake in Haiti, Andrés helped by providing the survivors with meals. This experience impacted him enough that he founded World Central Kitchen, which has helped feed those affected by Hurricane Harvey, Hurricane Maria, Camp Fire, and other natural disasters around the world. Andrés' efforts even earned him a nomination for the 2019 Nobel Peace Prize (and rightly so, I would think)! He's even the author of our Great DMV BookClub January book selection We Fed an Island, documenting his experience helping in the aftermath of Hurricane Maria.

Manned by volunteer chefs, the D.C. emergency kitchen has plans to do the same for those who are left without pay right now. The emergency kitchen opens on January 16 and plans to serve rotating menus of hot meals, sandwiches, and salads.

What are your thoughts about the D.C. emergency kitchen? Will you volunteer to help out? Let us know your thoughts in the comments below!

Here's a guide to all the D.C. businesses that have pledged free or discounted meals and items to furloughed workers!

Head to the D.C. Our Community Now homepage for more local news, events, and features that bring us all together!