Never has a smell so foul attracted so many fans.

The Denver Botanic Gardens' famous Amorphophallus titanum, affectionately known as Stinky, is looking like it might reveal its visual and odorific glory to us this fall. The gardens' horticulturists are predicting it may bloom in early to mid-September, just enough time for people near and far to don their nose plugs and prime their cameras for the event. Prime viewing will be only 24 hours once blooming starts.

Stinky is a legend, and not just for its smell (though that is a serious attention-grabber). This will be the plant’s second time inspiring awe, blooming first in 2015, an occurrence that was also the first corpse flower bloom at the Denver Botanic Gardens.

So what’s it really smell like? Decaying flesh. Yep, that’s right. But it doesn’t deter fans from coming in droves to see it; in fact, it’s part of the attraction! Maybe this is a horticulture version of the “does this milk smell bad to you,” situation we’ve all been put in. You know it’s going to be a full-on nostril assault, but you do it anyway because, hey, YOLO.

And this year, Stinky could put on a smell and a show! According to the gardens, “Horticulturists are measuring the plant daily. It will grow to be more than 5 feet tall. The corm is larger than in 2015, causing horticulturists to believe the plant will be taller and the bloom larger.” 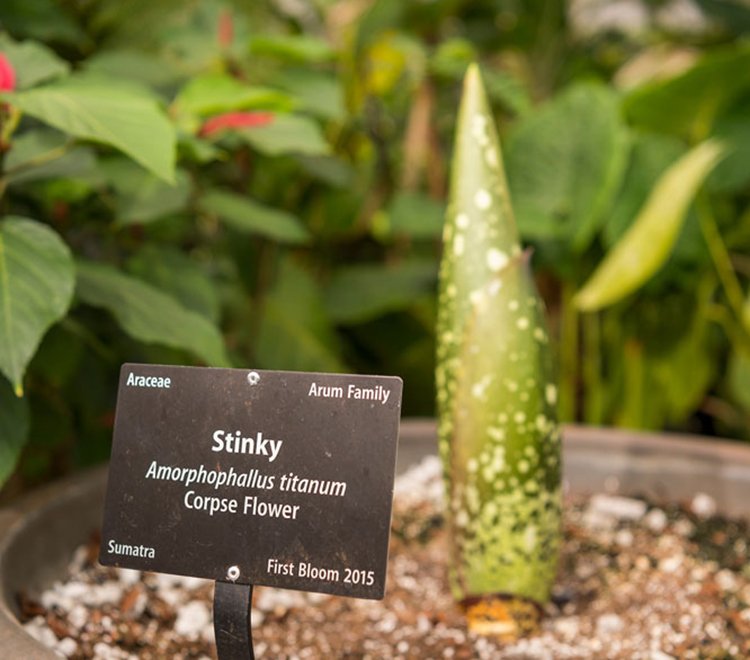 This is Stinky. Stinky wants to smell you later (or is it the other way around?). Courtesy of the Denver Botanic Gardens.

So why all the putrefying aroma? Nature, baby.

The corpse flower is native to rainforests of western Sumatra. It only smells when it blooms, and the potency of its decaying flesh odor increases from late evening until the middle of the night and tapers off as morning arrives, relates the gardens.

The rotting smell attracts flies and carrion beetles that serve as pollinators. In addition, while blooming, its large spike warms to 98 degrees, further disseminating the odor to increase the range of attraction. Now that’s nature at its finest!

To Bloom or not to Bloom

It’s important to note that corpse flowers bloom every three to eight years after the first bloom. So, it’s possible that it might not happen this year.

But, if it does, you don’t want to miss it! The gardens said it will keep its regular hours of 9 a.m. to 8 p.m. during the bloom. On the bloom day, gardens members can enter at 8 a.m. The approximately 18-year-old plant can be viewed in the Orangery greenhouse.

If you want to see Stinky in action now, you can check out a time-lapse video of the plant blooming in 2015, courtesy of the gardens.

Even if the corpse flower is shy this year, the Denver Botanic Gardens has a host of other beautiful plants, flowers, and gardens to visit any time. You can find out more information about exhibits, hours, and special events at botanicgardens.org.

What do you think? Will you be paying Stinky a visit? Share your thoughts with us in the comments below. Smell ya later, Denver!

Storm a Colorado castle (or just take a tour)!

The 7 Best Interactive Maps Tracking the Coronavirus in Real-Time