Guy Fieri, the Mayor of Flavortown, Is Only the 3rd Chef to Receive a Star on Hollywood's Walk of Fame

Guy Fieri, the Mayor of Flavortown, Is Only the 3rd Chef to Receive a Star on Hollywood's Walk of Fame

From winning the second season of “The Next Food Network Star” in 2006 to his own Hollywood Star in 2019, it has been an amazing ride for this exuberant celebrity chef.

In the early 2000s I developed an addiction – an addiction to watching unknown chefs and hosts cooking meals, all the while making it look so easy, fun, and doable. My supplier? The Food Network.

In a time that predated the luxurious binge-watching that we experience now, at the click of our subscription fingertips, I found my Saturdays devoted to watching the round-up of the fledgling stars’ shows: Giada De Laurentiis’ Everyday Italian, Sandra Lee's Semi-Homemade Cooking with her tablescapes, and – my first hook – Sara Moulton's Sara’s Secrets, where a guest showed how to brine chicken prior to cooking, to make it super tender. Best tip ever. That one delightful episode changed my chicken-cooking life forever.

These shows taught me how to chop, prep, and make delicious and easy recipes – I was inspired. I even created my own cooking show in the privacy of my kitchen. (Okay, so my audience – our dogs Rudy and Max – I'm pretty sure were only in attendance for what I dropped on the floor; however, they were an attentive audience. That counts, right? Please tell me that you haven’t pretended, on occasion, to have your own show in the safe compound of your kitchen whilst making dinner. We’ll keep it between us! I promise.)

In 2005, The Next Food Network Star premiered, and in Season Two, Guy Fieri won the competition. My husband and I watched every episode, rooting for Guy, offering him advice in the challenges ... we just felt he had the “it” factor to be The Next Food Network Star. After all, we were avid watchers and had learned so many tips and techniques – how could we not be experts? I am so sure he heard our suggestions through the television. 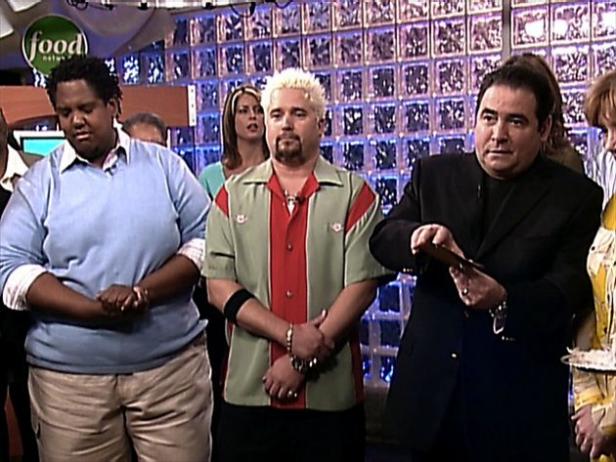 BAM! Guy beat out sweet Reggie ... Take a walk down memory lane of Guy's Season 2 Finale win. Upon winning The Next Food Network Star competition in 2006, Guy Fieri quickly became one of the major influencers of the Food Network landscape and put it on the map, expanding it to a much wider television demographic.

Since that time, Guy is a five-time Emmy nominee for his multiple Food Network shows, including the long-running Diners Drive-Ins and Dives, Guy's Big Bites, Guy's Grocery Games, and more. Also, a New York Times Best Selling Author with six cookbooks, he has over 63 restaurants around the world and at sea, as well as his own food line. Also, Guy is quite the philanthropist, with his own charity, Cooking with Kids, as well as supporting the Make a Wish Foundation and Best Buddies International. That is quite the culinary empire Guy has created; therefore, it is no wonder he was selected for a star on Hollywood's Walk of Fame.

Joined by his wife, Lori, of 24 years, their two sons Hunter (23) and Ryder (13), and his beloved parents, Penny and Jim, Guy Fieri received the 2,664th star on the Hollywood Walk of Fame. Guy is only the third chef to receive a star, following in the steps of chefs Bobby Flay and Wolfgang Puck. 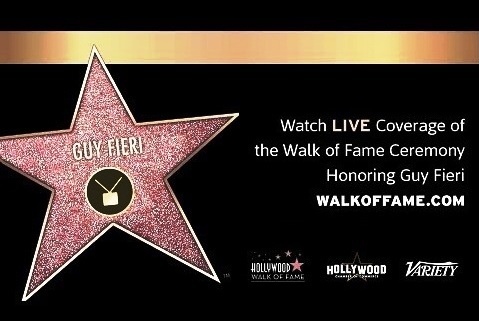 The ceremony was live-streamed exclusively on May 22 by Variety (click here to watch) and lasted approximately 32 minutes. It was full of accolades – not only for what Guy Fieri has accomplished since his premiere on national television in 2006, which shot him into the national scene, but also for his humble journey to his success.

Leron Gubler, Retired President & CEO, Hollywood Chamber of Commerce, and the Master of Ceremony provided a fabulous overview of Guy Fieri’s childhood – the pretzel wagon he built with his dad, a study abroad, passion for food, college, restaurants, and his path to winning the second season of The Next Food Network Star. Then, Food Network’s chief lifestyle brands officer, Kathleen Finch, discussed Guy’s television series, restaurants, cookbooks, cooking line, and his family.

" ... Even with all that success, he is still one of the nicest and most generous people I have ever known," Finch said, with a big smile and genuine warmth.

“Dad, when I was a kid and I saw you on Next Food Network Star, I was completely blown away that you were actually on TV," Guy's son Hunter said, to the laughter of everyone in the audience. "While it didn’t change my perception of you as a father, I knew it was going to change our family positively, but I never imagined it coming to this point ....” 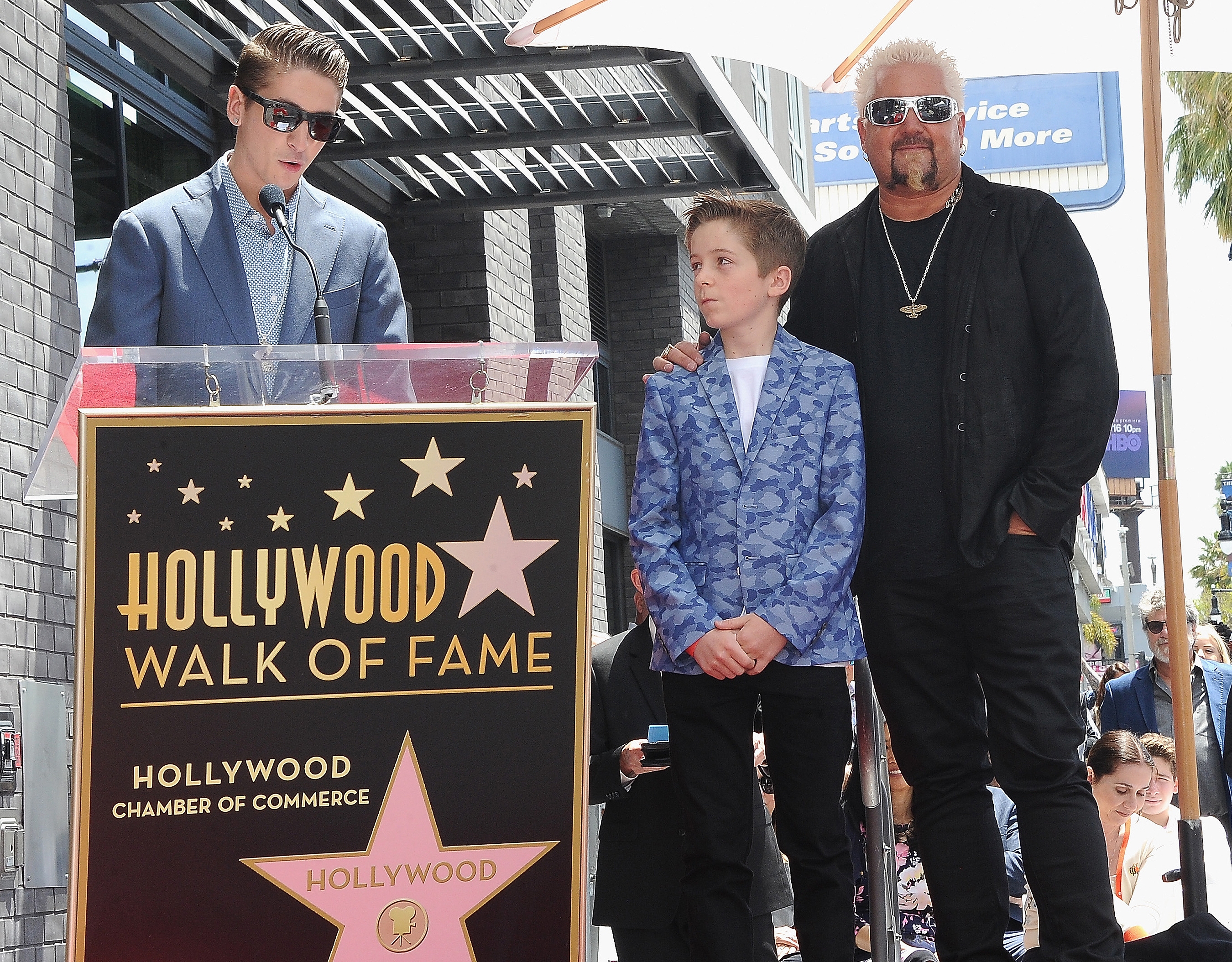 He went on to speak about their family and his father’s hard work at building his empire. Hunter concluded by looking at his dad and saying, “You’re my best friend; you’re my mentor, and my idol. And I can’t be more proud of you. Thank you for always being you and the only star we ever need to meet. Love you, Dad, Congratulations.”

With huge hugs from both his sons, it was obvious Guy was a bit choked up. (Courtesy of the Beverly Press)

Even actor Matthew McConaughey (who also happens to be Guy's friend) delivered a touching tribute: "In a business where you can be anyone you want to be, you've been you the whole time," he said. "That ain't easy. Congratulations.”

“To say this is an honor and highlight of my career would be a gross understatement," Guy said in his wonderfully funny and humble acceptance speech. "… I was on a plane to Miami – I ended up on the Moon." 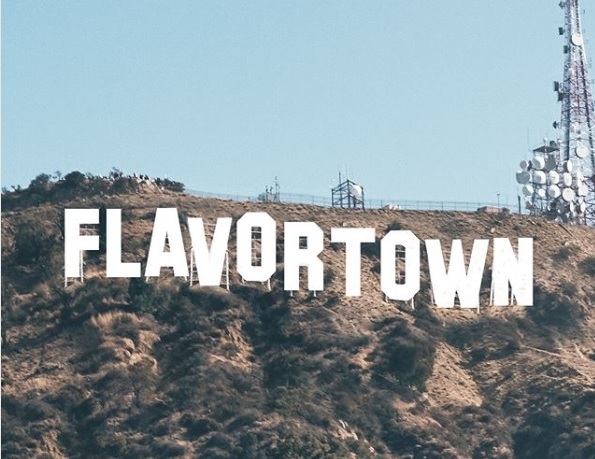 With tattoos, spiky blond hair, bowling shirts, and shorts, Guy is the epitome of "don't judge a book by its cover." He is a man true to himself and his family, a trained chef, a culinary entrepreneur, and a man who has changed so many small restaurateurs all over our country and so much more with his charity works.

In an exclusive interview with Variety, he said, “I’m not a TV person. I was never groomed for this — I think what people get is that I am the same guy; I am just being Guy.”

There are also 48 Triple D restaurants in the DMV: 21 in Maryland, 20 in Virginia, and seven in Washington, D.C.

Have you eaten at any of Guy’s "Diners, Drive-Ins, and Dives" (the Triple Ds)? What are your thoughts? I have two in my neighborhood. Yes, TWO within a couple of miles of my house and another two within close proximity, plus a few others that are t20-30 minutes away. When I looked at the list he’s visited in the DMV (see above) I am amazed that I haven’t run into Guy myself.

Let me know your thoughts in the comments! I'd love to hear from you!