And that's a wrap, folks – Our watch is over.

And, just like that, our final watch is over! Game of Thrones has wrapped, and we have to begin the search for something else to watch. (We recommend checking out The Chilling Adventures of Sabrina or The Umbrella Academy!)

Now is the time for us the dwell on the events that scrolled across our screen, say goodbye to a show we know and love so dearly, and accept that there is no more.

There are so many thoughts and feelings running through my head right now. I'm both sad and angry because the ending was both not what I expected or what I wanted, yet I'm somehow satisfied, too, because the show closed blissfully.  Was it perfect? No, definitely not ... but you can't please everyone.

This episode ... I don't even know where to begin.

A few good points: we were given the typical action scenes, heroic acts, fatherly love (The Mountain, I'm talking to you), and the loss of great and not-so-great characters. Although I did not find this episode appealing, I can, however, see the opposite side. The episode was not predictable, sort of, making the shock and awe factor quite resilient. This was the Game of Thrones series that we know and love.

After weaving through the shock and awe resulting from a single word, "Dracarys," I was left speechless and disappointed. I was shocked, and that's precisely what Game of Thrones fans want ... to be shocked. However, the type of shock that I encountered was not positive. I felt unsatisfied, angry, and ultimately unhappy with how things went down.

This was the downfall of Daenerys Targaryen and the loss of a great character. She was the good-girl-turned-villain in a matter of a few episodes, and this was not the whirlwind we were expecting despite the circumstances: loss of her best friend and dragon. 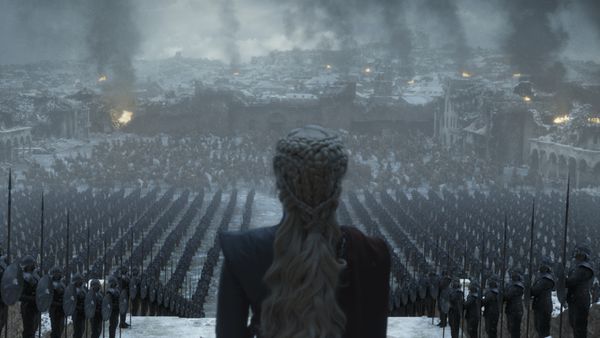 Again, Arya is the true hero, and I stand by her on many accounts. Her bravery and unwillingness to repent is both what got her in that situation and what saved her life. She kept moving.

Cersei finally met her end, and we said goodbye to a queen we all loathed. She's equal to Professor Umbridge in Harry Potter. If there is one thing we can all agree on, is that Cersei is ... well, not our favorite character.

Overall, the cinematography, shooting angles, and special effects in the episode were phenomenal. With the millions of dollars in the budget, the show was sure to have as realistic of an appeal as we'd expect! At least we could see this battle (still bitter)!

What an episode. The events that unfolded, and the kings and queens that were chosen, and all the final character arcs sealed the series nicely. There are only two factors I have to complain about: Arya's chosen path and Jon Snow's fate. They were both random ... very random.

I would have liked to see the writers choose a different path for Arya as I wanted to see her stay with her family. Arya is not really an explorer; she's a trained assassin who lived her whole life with a kill list and finally sat down and learned that there is more to life than murder. It was very out of character for her and did not seem to fit the bill.

Although it was inevitable, I did not expect Jon Snow to be the final downfall of Daenerys Targaryen, even though he was the only one who could get close enough to her.

What was even more interesting was that Drogon burned down (melted?) the Iron Throne instead of burning the one character who was the cause of Dany's death! Instead of Jon, Drogon chose to destroy the very thing that drove her mad! This hints that Drogon knew what the true enemy was all along, as well as what truly killed Dany – the love for power.

Tyrion definitely took the cake in this episode. I cried along with him as he uncovered the bodies of his siblings and the one man who saw him for who he really was and not just the imp.

They tossed the bloodline rightful heir to the throne stance out the window and gave the election of a new king some meaning. The little guys were taken into consideration and someone who deserved to be king was handed the crown!

Major bonus: We got what we asked for ... plain and simple. Jon Snow went back and made amends with Ghost, which led me to tears as I knew they would be together from now on! How did you feel about the final episodes of Game of Thrones? Did you feel that it got the closing the show deserved? Tell us your thoughts and feeling in the comments!

The National Memorial Day Concert Is Going Virtual for 2020