'Once' at Olney Theatre Center Is a Beautiful Musical Love Story

'Once' at Olney Theatre Center Is a Beautiful Musical Love Story

See this Dublin-based production through March 10!

Once looks like a simple show on paper. A guy, a girl, and an ensemble. But the beauty and the difficulty of this show is that every actor on stage also plays a variety of instruments. Can you imagine being the casting director charged with not only finding the best actors for the roles, but the best musicians as well?

For what it’s worth, the casting director at Olney Theatre Center can rest assured that they're secure in their position. Each actor in this production is as close to perfect as you can get. In a word, this production of Once is fantastic!

Before the curtain rises (so to speak), the talented group of musicians ambles onstage and treats the audience to a concert of a few Irish-hits (with some U2 thrown in for good measure.) Before everything has even begun, the audience is already in good spirits. It’s then time to start the show.

The story of "Guy and Girl meet on the street in Dublin and change each other’s lives over the course of a week" is beautifully played out and elevated through the use of an Irish band, including mandolins, fiddles, and guitars.

Girl, played by Malinda Kathleen Reese, is Czech, making her one of the few characters on stage who's not Irish. She and her Czech brethren have just arrived in Dublin and live together in a small flat. Reese is fantastic as Girl. She’s wonderfully direct throughout her scenes. Her line delivery perfectly plays into the early joke that “She’s Czech; she’s always serious.” However, Reese allows the audience to see just how close music is to her heart and how much she cares for the people around her, including Guy -- a man she’s just met.

As Guy, Gregory Maheu allows us to see how perfectly matched the two are. At the start, Guy is confused by Girl and her awkward conversations. It isn’t until later in the play that Maheu really lets Guy’s heart shine through and releases all the pent-up feelings he’s been holding onto for so long. For much of the show, Guy spends a great deal of time reacting to Girl’s orders. In those instances, Maheu shines. Whether it’s through a wry smile or embarrassed shell-shock, he’s always in the moment. 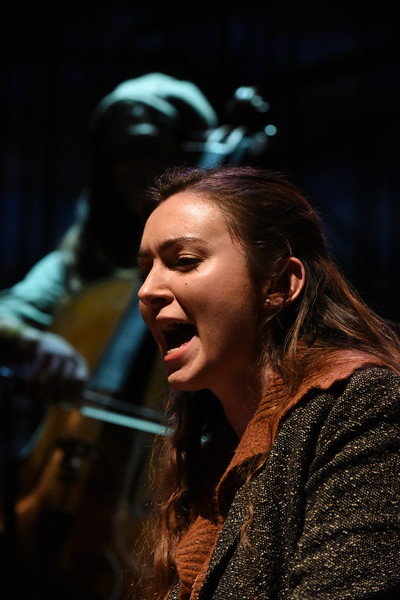 As a pair, Reese and Maheu are delightful. They play off of each other believably. The audience can see why the two fall into step with each other so quickly and seamlessly. It’s a masterful performance – and that’s before you add in the fact that both are playing the piano and guitar through much of the story. Once you take that into account, you have a fantastic pairing that is only elevated by the musicians around them accompanying the story.

The ensemble switches back and forth from specific characters in the story to street musicians accompanying the action. I feel as I’ve said this before, but it should be mentioned again: their musicality is stellar. Not only are they talented, but they are able to convey the particular brand of joy you most often hear in Irish folk-songs. Even without the show occurring, I would happily watch them all perform a concert. While much of the show isn’t overtly happy, the music itself and the cast’s performance of it brought many smiles and quite a few toe taps to the audience. 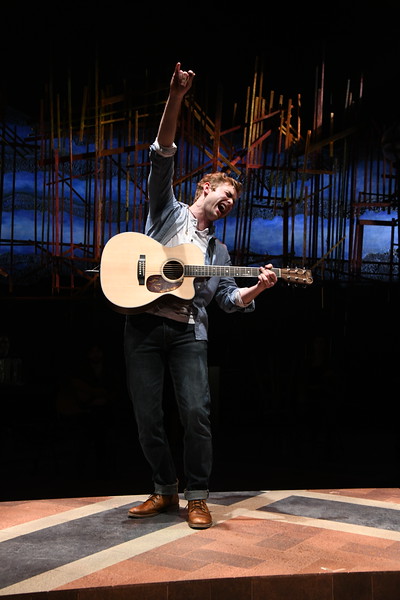 The set design is not my favorite. It’s beautiful but doesn’t seem to fit the Dublin setting. However, the design is functional, and I enjoyed watching the actors work in the space. Shifting scenery often stands in for a bed or a cliff overlooking the Atlantic. A hidden bar even appears out of nowhere, perfect for a night at the pub.

Olney Theatre Center’s production of Once is a beautiful example of talented artists being allowed to practice their craft. The cast and creatives gave the audience a moving story, told by a first-rate cast. In the end, I most definitely left with a song in my heart and a smile on my face, which I’m guessing is exactly what we all want theatre to provide.

**All photos courtesy of The Olney Theatre Center.