REVIEW: 'King John' at Folger Theatre – The Man That Should Never Have Been King

REVIEW: 'King John' at Folger Theatre – The Man That Should Never Have Been King

While King John may not be the most well-known king, in history or literature, Folger’s production of his story is intriguing and insightful.

As the Folger Theatre production of Shakespeare’s King John opens, the audience is given the necessary details of the story in a tongue-in-cheek introduction by the cast. The most important part of this introduction is that King John should never have been made king in the first place. Thanks to the deaths of his four older brothers, and the machinations of his mother, John became king, usurping the crown from his brother’s young son. This is where the complex story begins.

Even as a Shakespeare fan, I appreciated this introduction. King John is not often performed, and even the most informed fans of his work have never encountered the piece. In an earlier interview, both Aaron Posner, the director of the piece, and Brian Dykstra, King John himself in this production, confessed to never seeing or even reading the play before taking it on.

Because of this, the Folger’s production seems fresh and new. The story isn’t something the audience has seen many times before, so the cast and crew are able to create something that feels different than many of the Bard’s works, while also seeming relevant to today’s political landscape. As King John, Dykstra portrays a king that for all intents and purposes should not be sitting anywhere near the throne. Dykstra’s John is disheveled -- and constantly tripping over the very chair on which he’s fought so hard to sit. While most of Shakespeare’s kings are all-powerful and all-knowing, Dykstra allows the audience to see that he’s often making decisions as the words are coming out of his mouth. And these decisions may not be the best for anyone in his kingdom. It’s a masterful portrayal of someone who is a great guy but not a great leader. 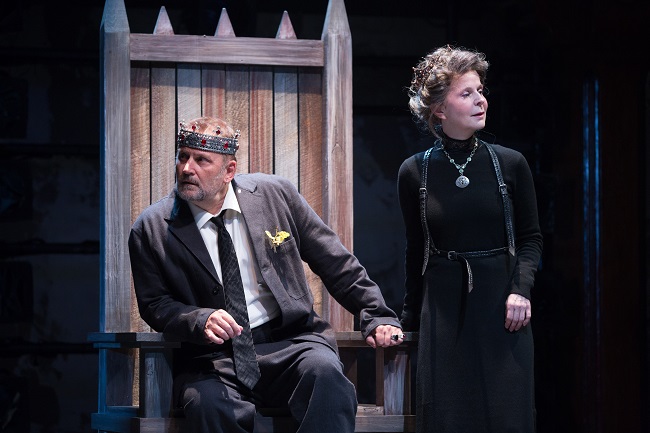 King John (Brian Dykstra) rules over England, with his mother Queen Eleanor of Aquitaine (Kate Goehring) by his side. Photo by Teresa Wood.

Surrounding John is a cabinet of advisers including his mother the Queen (Kate Goehring), and his cousin Philip Faulconbridge (Kate Eastwood Norris), among others. As Queen Eleanor, Goehring is commanding and powerful. Goehring makes it clear that Eleanor is the one that’s truly pulling the strings. In a turnabout from Shakespeare’s time (where men were always charged with playing women), Philip Faulconbridge in this instance is played by a woman. Her Philip is funny and definitely using his questionable relation to the King to his own advantage. Eastwood Norris changes her mannerisms and movement, completely becoming this noble gentleman.

Throughout the play, John finds himself at odds with France (the King of France portrayed by Howard W. Overshown), the Church (Cardinal Pandulph portrayed by Sasha Olinick), and his relatives -- mostly his former sister-in-law Constance (Holly Twyford) and her son Arthur (Megan Graves). In another flip, Arthur is portrayed by a female who, as she jokes in the opening, is once again playing a boy. While Arthur’s fate may not be a happy one, it’s he that ultimately brings down the King in a roundabout way. Graves’ Arthur is scared, nervous, and kind. She lets the audience feel every emotion, and by the end of the play, the audience can see why he so deserved the throne. 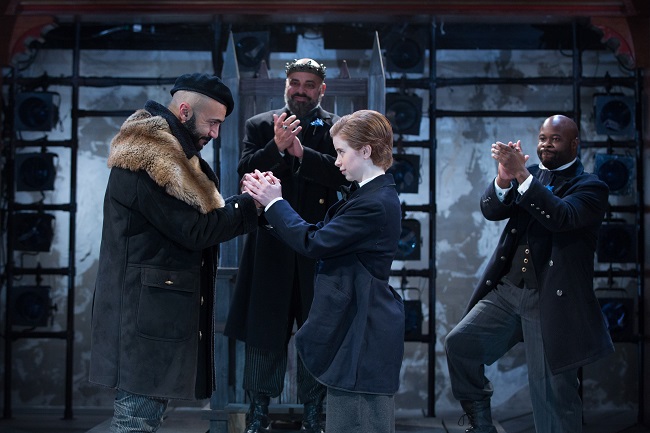 While the politics and intrigue of medieval England seem par for the course for a Shakespeare play, Folger flips the script, so to speak, by setting their performance in the 1940s. The black and white costumes designed by Cidney Forkpah and her team shine on the simple stage. So often words and story are lost amongst the ornate costumes of most medieval England set productions. But in this case, the simplicity of black and white, suits, ties, and dresses beautifully allows the story to capture the audience.

While King John may not be the most well-known King, in history or literature, Folger’s production of his story is intriguing and insightful. As we know, history has a way of repeating itself, and the story of a King who isn’t made for the job -- yet takes it anyway -- is a strong message for today’s complicated political landscape. This message is delivered masterfully by the cast and crew of this beautiful production!