Chevy Chase comes to Denver’s Bellco Theatre with a screening of his 1980 comedy classic, Caddyshack.

“The shortest distance between two points is a straight line in the complete and opposite direction.”  –Ty Webb

Do you want to watch the comedy classic Caddyshack up close and personal with its witty and philosophical golfer, Ty Webb? Grab your popcorn and get ready to laugh at this behind-the-scenes evening.

Chevy Chase – the man behind some of comedy’s favorite classic characters, including Ty Webb, Clark Griswold, and Fletch – will be in the Mile High City this summer. Denver’s Bellco Theatre hosts the funnyman on Sunday, August 25, for a taping of Chevy Chase Live and a screening of Caddyshack.

A presale for the event begins on May 15 (at 10 a.m.) and regular tickets go on sale this Friday, May 17, on AXS.com and the Bellco Theatre box office. VIP tickets offer for a post-show photo op and premium seating for the event. Chevy Chase will answer live questions from the audience after the movie, giving insight and a peek into the film and his career. You can count on some legendary laughs!

Also, please note that this event is intended for a more mature audience, so leave the kids at home! 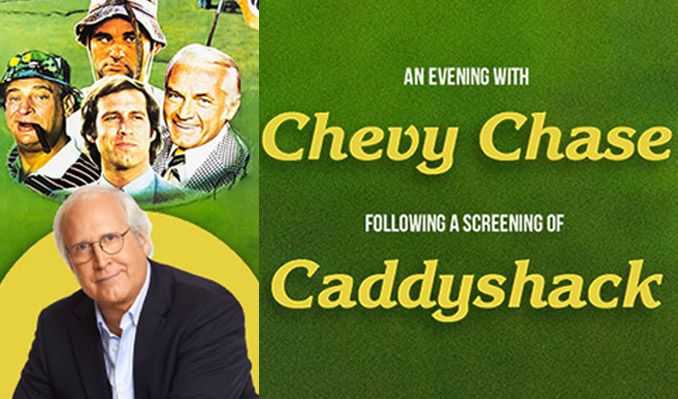 A comedian, writer, film and television actor, Chevy Chase has been a household name longer than most of us can remember. One of the founding cast members of Saturday Night Live, he was a groundbreaker in making comedy such a huge entertainment genre, helping pave the way for many of today’s comedians.

The first breakout star of SNL, Chase gained superstardom in the comedy world, as he is most recognizable for his roles in Caddyshack, National Lampoon’s Vacation, and Three Amigos, as well as his role as Pierce Hawthorne on the NBC series Community.

Caddyshack is a 1980 comedy that starred Chevy Chase, Bill Murray, Rodney Dangerfield, and Ted Knight. The story of a summer spent on an upscale Nebraska golf course became a cult classic and is considered one of the funniest movies of all time by many, including TIME and the American Film Institute, as well as being a favorite among many in the professional golf world.

A longtime behind-the-scenes feud between Chase and Bill Murray, loads of improv, and off-script lines made this film one that will be laugh-out-loud funny forever.

What do you think? Are you interested in attending this one-time event? Also, sound off in the comments below with your favorite Caddyshack quote!