Restaurants like Cuba Libre, Cranes, Olivia, and Modena team up to create an outdoor dining experience.

It's been tough times for the downtown restaurant scene. According to a recent report from the Downtown D.C. Business Improvement District, the area’s daytime population in July was 10% of what it was in February. Comparing this July to last year's, economic activity downtown has dropped 88%.

But D.C. restaurateurs are rolling with pandemic punches and present a new idea for you and your lonesome palate—a downtown "streatery" with outdoor seating.

It's called the "Downtown D.C. Dine-Out on 8th Street" and it's open on Fridays from 5 p.m. to 10 p.m., and Saturdays and Sundays from noon to 10 p.m. You can find the the assortment of pavilions and food trucks on a stretch of 8th Street between H and K Streets NW. 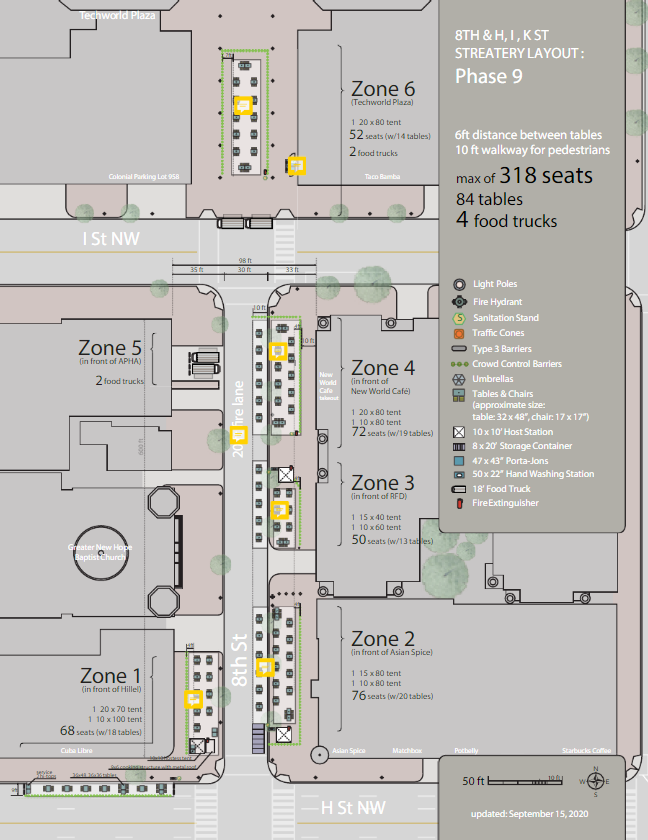 The Downtown D.C. Dine Out on 8th Street layout.

Ready to reunite with the flavors of downtown? We are FOUR days away from the opening of the  #DowntownDC Dine Out on 8th Street destination, weekend streatery!

Here's a brief summary of the participating restaurants and what they serve:

Olivia and Modena, which are both from Knightsbridge Restaurant Group’s Ashok Bajaj, will alternate days on the streatery. An assortment of famous local food trucks like Puddin' will also make their appearance.

Three months ago, downtown-goers enjoyed the successful pilot of the streatery concept in Adams Morgan. The D.C. Department of Transportation blocked off traffic on a portion of 18th Street, in order to provide dining despite indoor seating bans.

Anyone Go To Adams Morgan This Weekend? https://t.co/DW6fKvSKy7

If so, overall thumbs up or down? pic.twitter.com/Ado6H7jqt2

As per health and safety protocols, social distancing will be enforced, and tables are also limited to six people or less. Customers are expected to wear masks when not eating or drinking.

The restaurants will each present their own experience and offer table service. Customers should make the required reservations through restaurants directly, either in advance or in person. Administrators insist this isn't a festival, and diners won't be allowed to linger or gather in an effort to avoid unsafe crowding.

Will you be going to the streatery? How do you feel about the public health precautions taken? Leave a comment!