Everything You Need to Know About [email protected]

Everything You Need to Know About [email protected]

This year, San Diego Comic-Con is going virtual and will be completely free!

Every year, thousands of people flock to San Diego to for the biggest pop-culture extravaganza in the world. However, for the first time in its 51-year history, San Diego Comic-Con (SDCC) is going virtual and bringing the fandoms to your very own living room.

Here’s everything you need to know to make the best of your virtual experience.

The ABC’s of SDCC

SDCC’s virtual event is called [email protected] and will take place from July 22 to 26. It’s completely free and will include over 350 panels, starring the most prominent figures in film, gaming, and comics. You’ll see much-anticipated trailers, engaging interviews with your favorite actors, and some interesting behind-the scenes information about your favorite fandoms.

Unlike the physical SDCC though, you won’t be watching the con live. Each of the panels have been prerecorded, and therefore you will not be able to interact with the panelists or ask questions. However, some of the panels have reached out to fans via social media to gather some questions for their Q&A sessions.

Where to Find Panels, Shopping, Gaming, and Cosplay Events

[email protected] will start at exactly 9 a.m. PST on Wednesday, July 22. At this time, you’ll be able to enter the Online Exhibit Hall where about 700 exhibitors will be open for business. If you’re planning on watching the panels, you’ll want to to subscribe to SDCC’s official YouTube channel, Comic-Con International, and turn on notifications. All of the panels will be available on the YouTube channel, and gaming activities will be organized on Discord. IGN will also stream 34 of the panels, the Comic-Con Art Show and Masquerade will be held via Tumblr, and films and anime will be available to con-goers through a Chrome plug-in called Scener Watch Party Platform.

For more information on the week’s events, you can follow SDCC on Twitter @Comic_Con or check out the official Comic-Con blog.

PSA: #ComicConAtHome is coming up and preparing is simple! Subscribe to our YouTube channel https://t.co/WFezqmARIk and tap the notification bell so you’re set to see panels as soon as they’re released. Plus, be sure to visit our website for more content to come. pic.twitter.com/INudn8r8t4

To find the full [email protected] schedule, head to https://www.comic-con.org/cciathome/2020/programming-schedule. Here, you can also bookmark the panels you plan on tuning in for and sync them to your phone or email calendar.

Shopping at the Con

You will be able to purchase items from vendors virtually through the Online Exhibit Hall. This exhibit hall will go live on Wednesday, July 22, and include over 700 exhibitors, featuring exclusive items, must-see sales, and the best of your favorite fandoms.

To become familiar with the vendors and what you can expect to buy at the con, check out the exhibitor’s list on the Comic-Con blog.

Official Comic-Con merchandise will also be available through the merch store page on the Comic-Con website. 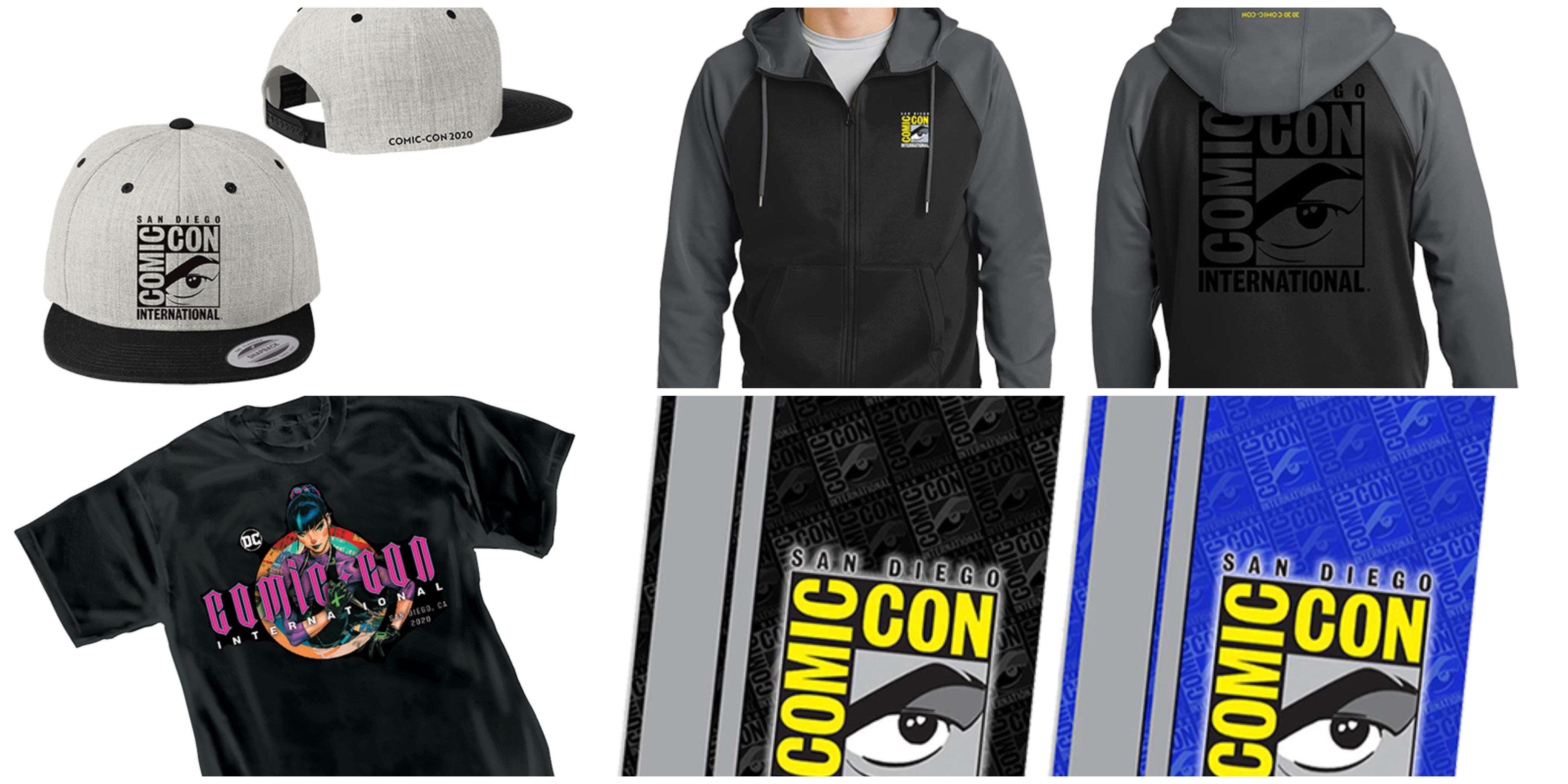 Gaming During the Con

Get your game on at #ComicConAtHome and go play! [email protected] offers over 40+ different game titles, demonstrations, interviews, and events that you won’t want to miss. Bring your competitive spirit and come see what's going on this Thursday-Sunday. https://t.co/Wt11A1oBqu pic.twitter.com/VCJPMFnwHD

The gaming events will be held on several platforms, to include Discord, Facebook Live, Twitch, and YouTube.

One of the best parts of SDCC is being able to watch some of your favorite movies and anime with your friends. Well, [email protected] has recreated this feeling by hosting online watch parties. The parties will be held through a Chrome plug-in called Scener Watch Party Platform. On this platform, you’ll be able to watch the movie and comment along with other fans.

Join your fellow con-goers for this year’s #ComicConAtHome watch parties - powered by Scener. Chat and watch together in Scener’s virtual movie theater. To see the screening schedule and RSVP, visit https://t.co/psLnCmphlR. See you there! pic.twitter.com/b9MVVcseqT

To see the screening schedule, visit scener.com/comic-con and RSVP for the ones that interest you.

Each year, SDCC showcases some of the best cosplayers from around the world in the annual Masquerade. This year, [email protected] will be hosting the Masquerade virtually, and attendees will watch cosplayers' entries as a video presentation and/or a series of photos that showcase the contestant's skills. The Masquerade website will open to attendees on July 23, and winners of the cosplay contest will be announced on July 24.

In the age of coronavirus, chalk art has hit the streets—literally. Therefore, [email protected] has asked people to submit photos of their chalk masterpieces. The best ones will be hand-selected and featured on the con’s website and social media accounts.

Although you’ll probably want to tune in for it all, you’ll have to do some picking and choosing as some of the panels happen at the same time. Don’t fret though—Here’s a list of some of the must-see panels you can expect to see at [email protected]

The New Mutants is about a hospital where young mutants are detained for psychiatric monitoring. It combines the best of superhero movies with the scacres of a horror movie.

If you’ve been following the trials and tribulations of the New Mutants film, then you know it’s been a rough time. The movie has been delayed multiple times—and even B.C. (before coronavirus). However, The New Mutants will have a special virtual panel at [email protected] featuring writer and director Josh Boone and actors/actresses Maisie Williams, Anya Taylor-Joy, Charlie Heaton, Alice Braga, Blue Hunt, and Henry Zaga.

Strange things are afoot at the Circle K as Bill and Ted teach us to be excellent to each other once again. Bill & Ted Face the Music will bring back Keanu Reeves and Alex Winter for another totally excellent adventure with their kids.

[email protected] will host a panel that features the new movie as well as actor Keanu Reeves, director Dean Parisot, and writers Ed Solomon and Chris Matheson. The panel will also be moderated by filmmaker Kevin Smith.

Star Trek disrupted the universe about 50 years ago and is still on its space mission. This panel will bring together the casts and producers of Star Trek: Discovery, animated series Star Trek: Lower Decks, and Star Trek: Picard. The cast of Star Trek: Discovery will even reprise their roles and conduct a vritual table read of the season two finale, “Such Sweet Sorrow, Part 2.” Patrick Stewart and the cast of the original series Star Trek: Picard will also discuss its first season, for the first time since the show’s finale. This is definitely a panel you won’t want to miss.

Although Marvel is expected to have a much smaller presence than normal, they will be presenting a new series coming to Disney+ called Marvel’s 616. The series will explore the historical, cultural, and societal impacts of the Marvel Comics Universe and how it intersects with the world.

The panel will include directors Gillian Jacobs and Paul Scheer, and executive producers Sarah Amos and Jason Sterman. It will be moderated by writer, Angélique Roché.

If you’re a fan of The Walking Dead, you won’t want to miss out on this panel. Chris Hardwick, the host of Talking Dead, will moderate a discussion about the popular apocalyptic show. Actors Noram Reedus, Melissa McBride, Jeffrey Dean Morgan, and Lauren Cohan will be featured in the panel as well as executive producers Greg Nicotero and Scott Gimple, and showrunner Angela Kang.

So, which of these panels will you tune in for? Let us know in the comments!