Here's the Impressive Lineup for 2020 'Something in the Water'

Here's the Impressive Lineup for 2020 'Something in the Water'

The 2020 Something in the Water show will feature well-known artists, including A$AP Rocky, Post Malone, Chance the Rapper, Usher, Nelly, H.E.R., and Foo Fighters.

To rile up the anticipation for the 2020 Something in the Water concert, the first lineup of participating artists was dropped on social media last Friday. According to The Virginian Pilot, the second lineup will be released sometime in January—so keep your eyes peeled!

Fans everywhere have gone berzerk sharing, retweeting, and commenting on the Instagram post. Tickets went on sale on Saturday, and only the three-day admission and three-day VIP admission tickets are left—you can purchase them and parking tickets here!

The 2020 concert is set for April 24–26 and is expected to have an even bigger lineup than last year. You might want to avoid the Oceanfront for the weekend because last year, streets were blocked off for parking, causing traffic jams everywhere.

To show respect for one of their famous alumni, Princess Anne High School read the lineup on the morning announcements, and the students can be seen showing their excitement.

when @Pharrell is an alum of your high school and exclusively releases the SITW 2020 lineup during 3rd period pic.twitter.com/ATEXofxTNe 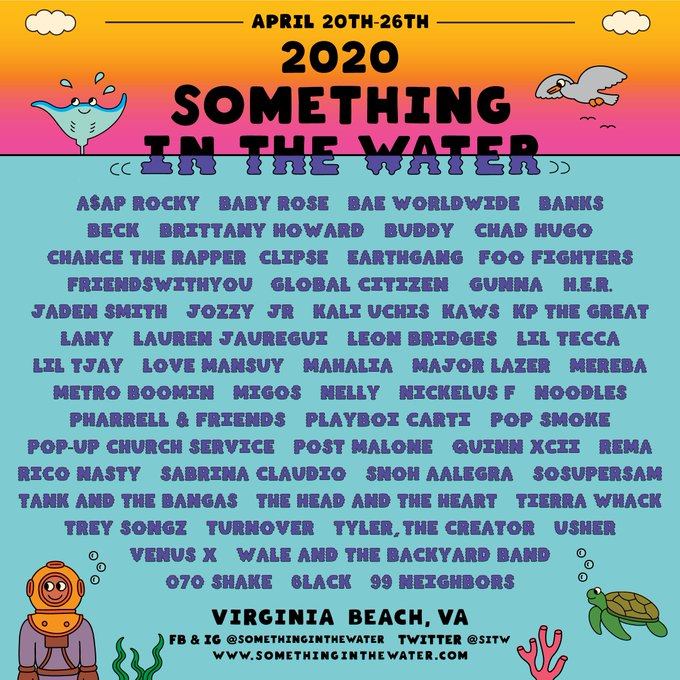 Courtesy of Something in the Water

The inaugural Something in the Water concert was a positive experience for the city of Virginia Beach in 2019, so we cannot wait to see the concert in motion again in 2020! Thank you, Pharell, for bringing an epic event to Hampton Roads!

What do you think of this lineup? Do you think it will be worth the tickets? Which artist are you most excited to see? Tell us in the comments!