London Town to Celebrate the 4th of July With Special Reenactments

London Town to Celebrate the 4th of July With Special Reenactments

Revolutionary War reenactments, trade demonstrations, and lectures are just some of the events planned for America’s holiday weekend.

London Town, the living museum located in Edgewater, is upping the ante for this year’s Fourth of July holiday. A cast of actors will take visitors back to the days of the Revolutionary War with musket drills, mock soldier recruitment, trade demonstrations, and more. The schedule of events also includes a performance of a Frederick Douglass speech and special cocktail and coffee Q-and-As.

On Thursday, July 4, guests can spend the day roaming the historic buildings and gardens of London Town. The day's events include a reading of Frederick Douglass's "What to the Slave is the Fourth of July” and a cocktail hour called  "Drinks with the Director.” The unique cocktail party will allow guests over 21 to chat with the museum’s director about the role of taverns in early America. 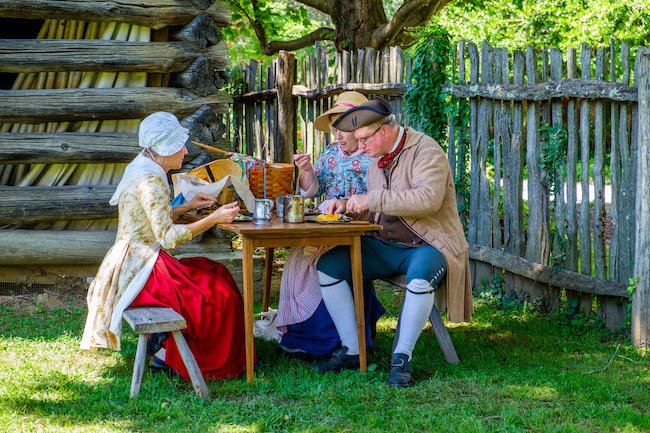 The weekend after Independence Day, London Town will literally be calling in the troops. On Saturday, July 6, and Sunday, July 7, the Continental Army and Continental Marines will be on hand to show guests a day in the life of a revolutionary soldier. Representatives from the United States Marine Corps Historical Company will hold musket drills, black-powder demonstrations, and show visitors how to recruit a soldier.

Visitors can also learn the trades of early London Town, including rope making and carpentry. On Sunday, come early for “Coffee with the Colonists,” an informal Q-and-A session with colonists that includes coffee and continental breakfast.

London Town is located about 50 minutes south of Baltimore in Edgewater. The 23-acre park features gardens, open spaces, and historic buildings. Admission is  $12 for adults, $7 for kids ages 7 to 17, $3 for kids ages 4 to 6, and $10 for seniors. London Town is a Blue Star Museum and grants free admission to active military members and their families.

Have you ever attended a Revolutionary War reenactment? Tell us in the comments!