The annual Fourth of July concert and fireworks show draws thousands of visitors to DC each year.

The National Mall will once again be filled with revelers on Independence Day. The National Park Service in D.C. has announced details for its annual Fourth of July fireworks show taking place on the National Mall. Last year the park service held a fireworks show to empty lawns due to the coronavirus. The city reopened on June 11 and Mayor Bowser has been enthusiastically inviting tourists back to the city. Fireworks are preceded by “A Capitol Fourth” concert, held on the west lawn of the Capitol and broadcast across the nation on PBS stations.

The Fourth of July fireworks show is one of the most popular events hosted in D.C. Most people come early in the day to visit the city sites and stake out a spot on the lawn. This year, the city and nation are looking forward to welcoming visitors once again.

The fireworks show starts at 9:09 p.m. and lasts for 17 minutes. Fireworks are launched from the Lincoln Memorial Reflecting Pool and accompanied by patriotic music and cannon firings. People who have not been fully vaccinated are encouraged to wear masks around the mall and everyone is required to wear a mask on the Metro and Metrobus. The NPS will release more information about the event at nps.gov/foju in the next couple of weeks. 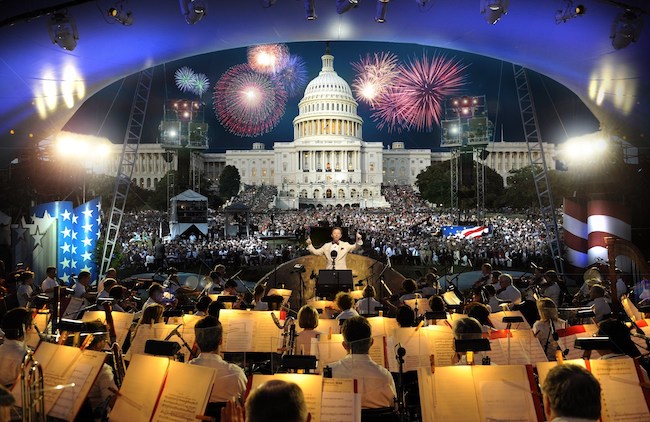 File image of "A Capitol Fourth" concert in 2019, courtesy PBS

“Watching the Fourth of July fireworks from the National Mall against the backdrop of the monuments and memorials is one of the grandest traditions of our nation’s capital,” said Jeff Reinbold, superintendent of National Mall and Memorial Parks. “This year’s display not only celebrates the 245th anniversary of American independence, but also marks an important step forward as the city emerges from the pandemic.”

Will you be attending the fireworks show in person this year? Share your plans in the comments.