On May 21, you'll get to see an astronomy rarity that is sure to please. A close pairing of Venus and Mercury will grace the dusk sky, creating the closest planet conjunction that we are likely to see in 2020, and one of the easiest times to see Mercury, as well.

To witness this cool event, look at the western sky about 30 minutes after sunset. The bright planet you see will be Venus, and Mercury will look like a red dot. Mercury is generally hard to see, so this will be a nice time to catch a glimpse of the elusive planet. The pair of planets will set about an hour and 42 minutes after the sun. 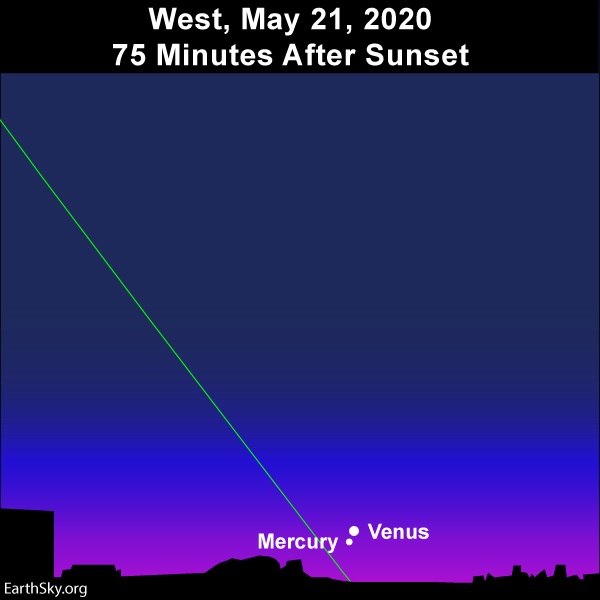 You should be able to catch Venus with the naked eye, but Mercury will be about 27 times dimmer than its paired planet, so you'll want to grab some binoculars or a telescope to do your gazing.

"The pair will be a little too widely separated to fit comfortably within the field of view of a telescope, but will be visible to the naked eye or through a pair of binoculars, says In-The-Sky.org.

After conjunction, Mercury will climb up and Venus will descend down, but you may be able to catch them in the sky for a few days, if you have an eagle eye. Look for the moon to appear close to both planets on May 23.

Stay tuned for more fun astronomy events! While June is actually very active, with both a solar and lunar eclipse, we won't get to see any of it because neither are visible in North America. But the summer solstice is coming up on June 20, and who doesn't welcome that?

Do you have any stargazing tips? Let us know in the comments!