Smashing Pumpkins to Headline Punkin Chunkin Festival, and We're Not Talking About the Band

Smashing Pumpkins to Headline Punkin Chunkin Festival, and We're Not Talking About the Band

Annual pumpkin flinging fest returns. Will the Big 10 Inch's record flame out faster than a candle in a jack-o-lantern?

Ever seen a pumpkin soaring majestically through the air? It’s a sight to behold, for sure, and you can watch your favorite gourd take to the skies and come crashing down in a most satisfying way at the 19th annual Punkin Chunkin fest.

Presented by the City of Aurora and Colorado State Bank and Trust, this year’s event promises to send those gourds faster and farther than ever before.

“The competition attracts highly-competitive teams from around the nation that create all kinds of crazy contraptions that launch, shoot, or sling eight-pound pumpkins anywhere from 100 feet to a mile,” says the event’s FAQ site.

There is so much more to flinging gourds than you would imagine! Teams that compete at the events have several different divisions to enter, depending on their launching machine.

According to the event site, these mechanisms include:

Trebuchet: Just gravity doing its thing. The trebuchet uses a counterweight attached to an arm to swing the pumpkin attached to a sling around and release at the right angle to cover some ground.

Catapult: Similar to a trebuchet but normally powered by springs or rubber bands.

Air cannon: Any potato gun fans out there? Air cannons like the king of potato guns. These machines use compressed air to shoot pumpkins over 4,000 feet. Air Cannon “Big 10 Inch” holds the Punkin Chunkin record in Colorado – launching 4,787 feet at the 2015 competition.

Centrifugal: Around and around the pumpkin goes, when it will fly, no one knows. The machine builds centrifugal force by swinging in a circular motion and releases the pumpkin at the optimal time for a long-distance launch.

Torsion: This machine uses twisted rope as its primary source of power, which stores mechanical energy when twisted. The amount of force it releases is proportional to how twisted it gets.

In the end, there will be one pumpkin tosser to rule them all! The one mechanisms that flings the pumpkin farthest is the big winner. 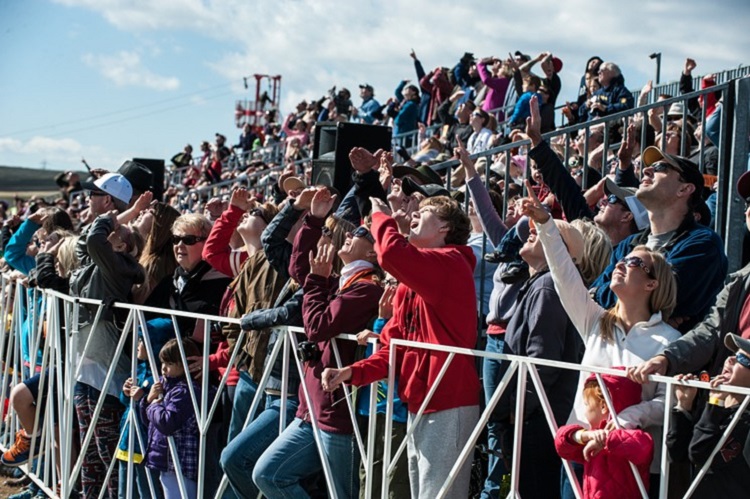 Ooh and Aah over the flying gourds. Courtesy of City of Aurora.

In addition to the main event, the festival will also catapult you into fall with a pumpkin patch, pony rides, fall crafts, live music and performances, and a Corvette car show. Like any good festival, food vendors, and a beer garden will also be on hand.

It won’t only be pumpkins that are flying, woodchips will be, too! Brand new this year is the Carve Wars’ chainsaw carving competition for a unique and fun fall experience! Carve Wars is a traveling chainsaw carving competition that showcases unique artistry. There will be a meet and greet opportunities with artists, one-of-a-kind carvings for sale, and live demonstrations, as well.

Will we see you there when pumpkins fly? Let us know in the comments below.

Braaaaaiiiiiinnnnns. Get your zombie on at the annual Denver Zombie Crawl!