Before getting into the wonder that is Winnie the Pooh at Adventure Theatre MTC, it must be said that there is no better place for this show to play than in Glen Echo Park. While the company has been performing in the park for decades, it’s clear that they have a perfect setting for their current show. To get to the theatre, you must first walk through some woods and over a bridge straddling a stream. Basically, before you even arrive at the theatre, you’re already in the Hundred Acre Wood that A.A. Milne imagined.

As someone who had never been to Glen Echo, I was in awe throughout the walk, observing just how many fun activities the park had to offer. Not only is there a large playground, but there’s also an aquarium, a pottery center, (sadly closed for the season) snack stands, and two separate theaters. That’s all near the entrance to the park. I’m fairly certain, there was even more fun past where I wandered. It’s a delightful place, full of energy and nature, and lots of little ones that were there to see Winnie the Pooh and all his friends.

This version of the classic tales, adapted by le Clanche du Rand for the stage, combines a few of the classic Pooh stories into one delightful tale of a very busy day in the Hundred Acre Wood. The friends encounter a Heffalump, find a lost tail, conspire to avoid bath time, and plan a birthday for the sadder-than-usual Eeyore, all in a short but sweet one-hour timeframe. Between the fast-paced action, and the multiple character changes, the children in the audience were rapt from beginning to end. Seeing their delight as favorite characters came to life was just icing on the cake of a joyful production.

This particular telling of the story casts four impressive actors to portray eight different roles. No small feat for actors, but the cast was outstanding, all playing up the characteristics of Milne’s characters we originally fell in love with. As the “silly ol' bear,” Derrick Truby Jr. portrays an adorably scatterbrained but completely loveable Winnie the Pooh. Wearing his Pooh bear ears and what I’m sure was a very warm pair of yellow fur overalls, he is instantly recognizable as the Pooh himself. 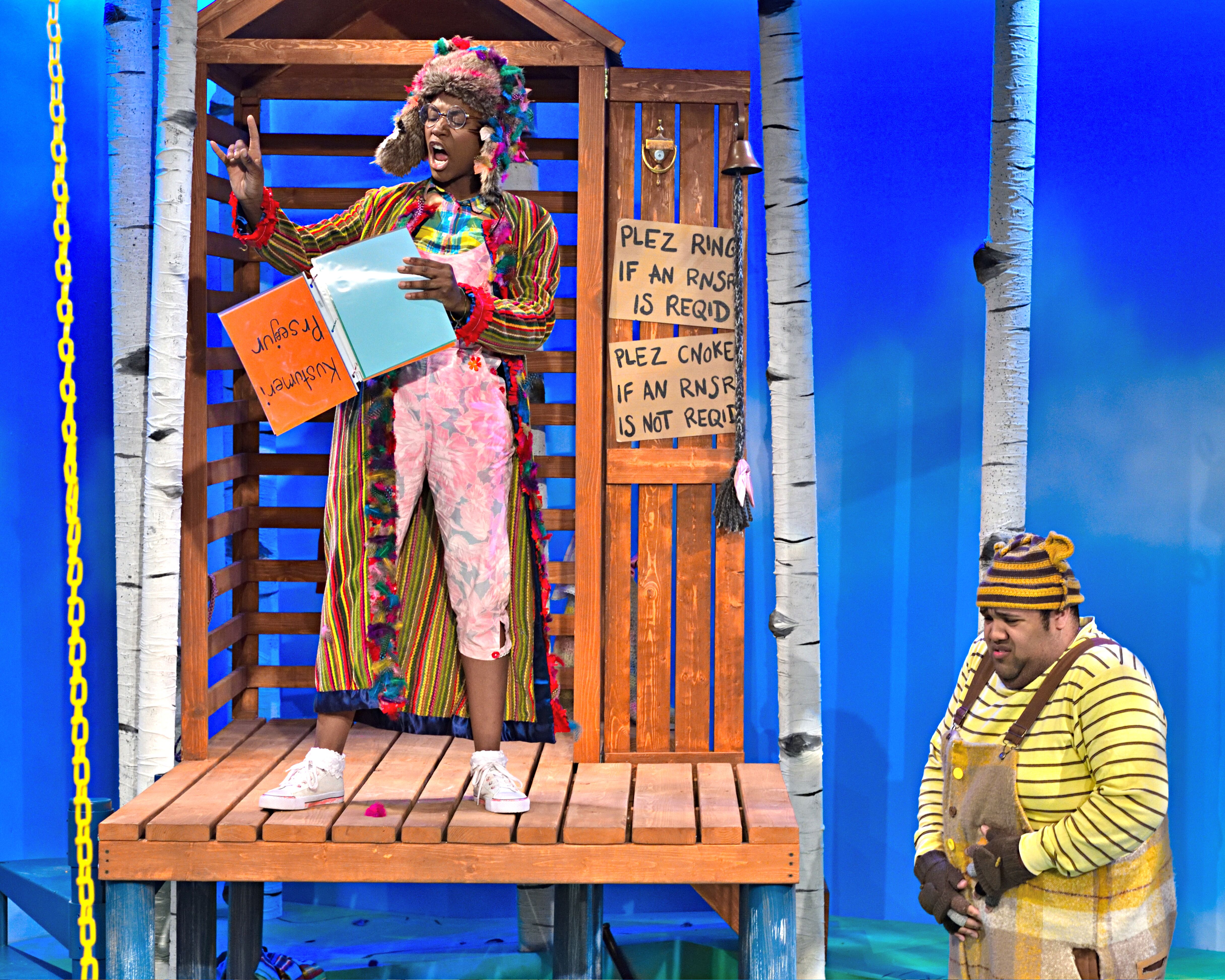 As his friend Piglet (as well as Owl and Roo), Billie Krishawn is a delight. She’s in constant movement throughout the production, playing each character uniquely – even using different accents for each -- and never losing the twinkle in her eye. She seems to enjoy entertaining the children in the audience, throwing a wink to one child, or a big smile to another. She factors those interactions into her performance, making Piglet all the more real.

A personal favorite in all of the stories is Eeyore, played by Sally Horton who also plays Kanga. She’s lovably morose as Eeyore, and a delight to watch as the donkey. While Eeyore is not the happiest, the stories always show that his friends love him no matter what. In Horton’s portrayal, you can see why. As her eyes light up when her birthday balloon appears, she switches quickly from sad to completely delighted. As Kanga, she still has that kindly manner but is very different from Eeyore. Rounding out the cast as both Christopher Robin and Rabbit is Stephen Murray. His Rabbit is the perfect collection of annoyance and playfulness. His performance is fun and funny and completely sold by the costume. Between his rabbit ears and giant glasses, he is definitely a hit with the kids in the audience.

The costumes for each character are stellar. They’re enjoyable to look at – containing little details that sell each character – and still unique in their design. I am especially fond of Eeyore’s hat (standing in for his mane) and his adorable heart-accented jacket. These little details make the characters pop. A special mention should also be made of the Hundred Acre Wood, designed by Nephelie Andonyadis; it’s a dream! From the trees to the log used for entrances, to Owl’s home with the "painted by Christopher Robin" sign, each little piece is completely reminiscent of Milne’s stories. Also, it’s quite useful as it contains a working swing and a sandbox. How fun is that?!

As children’s theatre goes, this production is much better than it has to be. It tells the story of familiar characters with a new spin in a gorgeous setting. Based on the reactions I saw, the children in the audience loved it all. There were also quite a few smiles on the faces of adults in the audience as well, making this production fun for the whole family!

Ever been to The Enchanted Forest? This Maryland gem is the perfect place to take your kiddos!