I doubt even the Wet Bandits would want to rob this home!

The Home Alone movies have become a staple during the Christmas season for the better part of three decades now. Ever since the first one premiered in 1990, the two films featuring the iconic Kevin McCallister have reached tradition status. From the quotable dialogue to pranks, the Home Alone movies will always have a place in fans' hearts, especially during the holiday season.

Disney+—the only streaming platform on which the movies are watchable—has decided to jump in on the cheer more than usual by having a renowned food artist put together the famous McCallister home ... using gingerbread!

Michelle Wibowo, a food artist and sugar sculptor, has won many awards for her craft. When asked to dedicate her time to this task, she had her answer ready and said, "I jumped at the chance because it is one of my favorite Christmas movies ... It doesn’t really feel like Christmas in our house until we have seen it at least twice."

Wibowo was able to use her creative baking skills to build the McCallister home, which ended up being five feet tall. The endeavor took a whopping 300 hours to complete! The end result, though, was simply stunning, with a total of 63 trees, 33 windows, six lampposts, and, of course, 14 pizza boxes. 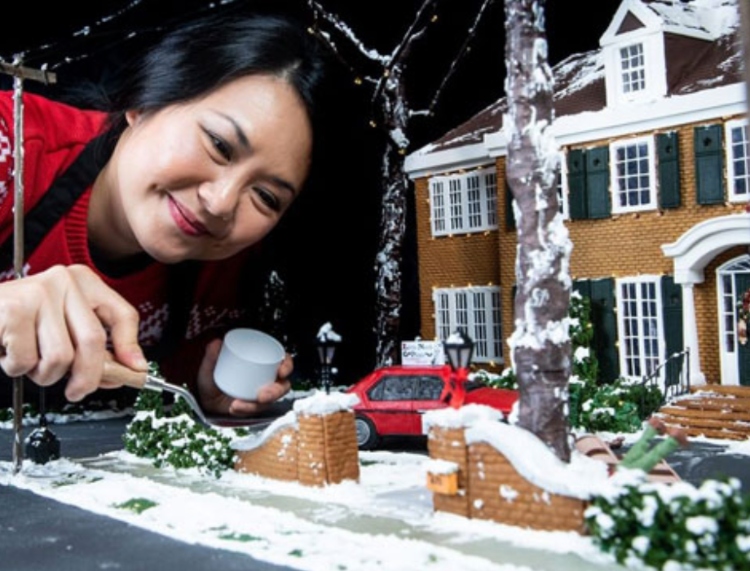 Those details weren't the only ones Wibowo put into her sculpture. The film's protagonist, Kevin McCallister, can be spotted in a snow pile, replicating the renowned scene of the character sledding down his stairs into the cold. Goofy villains Harry, Marv, and their Oh-Kay plumbing van can also be observed, along with the Little Nero's Pizza car, and the home's treehouse and tire swing.

Disney+ taped Wibowo baking the home, and we fans would love to see a refined feature of her bringing this iconic set to life. Right now, her gingerbread creation is at the Oak Centre for Children and Young People, located at Surrey's The Royal Marsden.

What do you think of Wilbowo's artistic piece? Let us know in the comments!