Lionsgate is bringing both the John Wick and Now You See Me franchises to life with two all-new roller coasters set to open in early 2021 at the Motiongate theme park in Dubai, United Arab Emirates.

The John Wick ride will be a 10-story roller coaster called "John Wick: Open Contract." As riders board the roller coaster, they will be given a choice: play the assassin known as John Wick, or hunt him down.

"You'll get two different experiences depending on which path through the queue you choose to get on the ride," said Jenefer Brown, the Executive Vice President and Head of Global Live, Interactive, and Location-Based Entertainment at Lionsgate.

The designers for the ride worked with the John Wick filmmakers to create an experience that places fans right in the action of the movie. Throughout the journey, riders will walk through a scaled-down version of the Continental, a chain of hotels that serves as a neutral territory for members of the criminal underworld.

"I think what's going to be amazing for fans is to have the opportunity to walk through the lobby of the Continental and experience different key moments in the settings that took place in the films," Brown said. "This attraction, in particular, is really about setting the story by putting people in this very immersive environment, and then you really get the action as you get on the coaster. It's 10 stories high, so there's definitely a level of intensity that's befitting of the John Wick franchise that guests will experience."

The second roller coaster to debut at Motiongate theme park will be one based on the magic-centric franchise, Now You See Me. Called "The High Roller," the magical attraction will be set in a casino.

"Guests will have the experience of walking through the casino and taking part in a heist that the Horsemen are in the midst of pulling off," Brown added. "There will be a really great immersive story experience that leads guests on to this coaster." 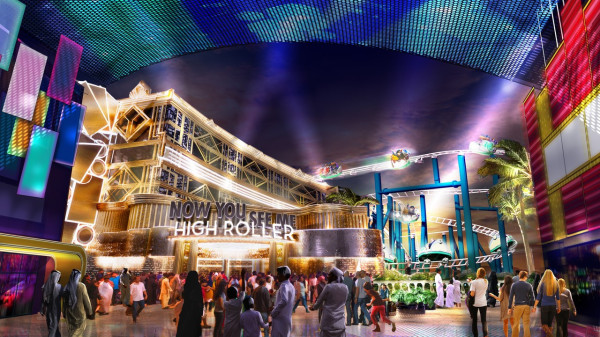 Motiongate is just the first stop on Lionsgate's roller coaster ride of fun. They plan to take on rivals such as Disney and Universal with their own theme parks and bring more of their movies to life.

"John Wick is definitely an intellectual property that we feel is perfect for location-based entertainment," Brown said. "Because the world is so rich and the characters are so intriguing. There's a lot of story that we can tell there in an experiential way. Now You See Me is the same way, as magic is incredibly popular and universal. Doing this first ride in Dubai I think will establish what we can do in other places around the world, and we’re interested in expanding our portfolio of film franchises and TV series, in outdoor theme parks."

Other than Motiongate, Lionsgate also owns a smaller, indoor theme park in China called Lionsgate Entertainment World. They have also already created a roller coaster based on the film The Hunger Games and a Step Up-based dance show. In the United States, the company has many national touring shows and a Saw-themed escape room in Las Vegas. The company plans to continue to expand within the United States and establish some of its theme park ideas right at home.

For now, the John Wick and Now You See Me roller coasters are expected to open in early 2021. However, the exact timing will depend on the relaxation of COVID-19 guidelines.

So, what do you think about these two new coasters? Would you take a trip to Dubai to experience the rides? Let us know in the comments!