Movie Review: '47 Meters Down: Uncaged'—Does It Sink or Swim?

Movie Review: '47 Meters Down: Uncaged'—Does It Sink or Swim?

47 Meters Down: Uncaged chooses to pull its inspiration from classic horror tropes rather than from the original film from which it was spawned. An unusual tactic. Did it lead to more success than its predecessor?

It was a bit surprising when news came of a sequel to 47 Meters Down. The Mandy Moore-led shark thriller was underwhelming throughout its runtime, producing little more than yawns and an embarrassingly predictable twist. The greatly-panned movie simply lacked the raw, foreboding tension of Jaws and the goofy charisma of Deep Blue Sea, landing in a grey zone of dismissive blandness. So, why make a sequel?

Well, it’s a surprisingly common practice in horror for sequels within the genre to ignore its predecessor. Sometimes, there is an impression that the concept was sturdy, but the execution fell short. This self-awareness doesn’t always lead to a suddenly-effective sequel, but we have seen success in films like Oujia and the somewhat-distanced sequel, Ouija: Origin of Evil.

So it would appear that Uncaged would follow a similar path, seemingly using 47 Meters Down in name and basic concept only. 47 meters down in the water. Killer sharks. Let’s go.

But this distancing in the sequel is not the only horror trend Uncaged chose to follow. It pulled a handful of classic horror techniques to keep the audience on edge and produce an oft-effective element of terror or dread. The sharks frequently move at a pace akin to Michael Myers from Halloween, proving (yet again) that speed in horror is not always the most effective move. The use of pale figures in the dark, tight camera perspectives, lurking shadows, and the almost-always cringe-worthy "never say die" ending (that, again, feels reminiscent of Halloween in vague regards) all create an atmosphere virtually absent in the predecessor.

That isn’t to say that Uncaged is this far-superior masterpiece worthy of accolades higher than the original. Its characters and subplots couldn’t be more cookie-cutter in their approach. The film, to its credit, does not rush too haphazardly in the opening scenes, preventing the subconscious response that even the cast and crew just want to get to the good parts. But this admirable attempt uses up its kudos quickly with dull development, weak dialogue, and bland characters. Frankly, you can’t wait to get into some shark carnage, regardless of who the sharks take down with them. 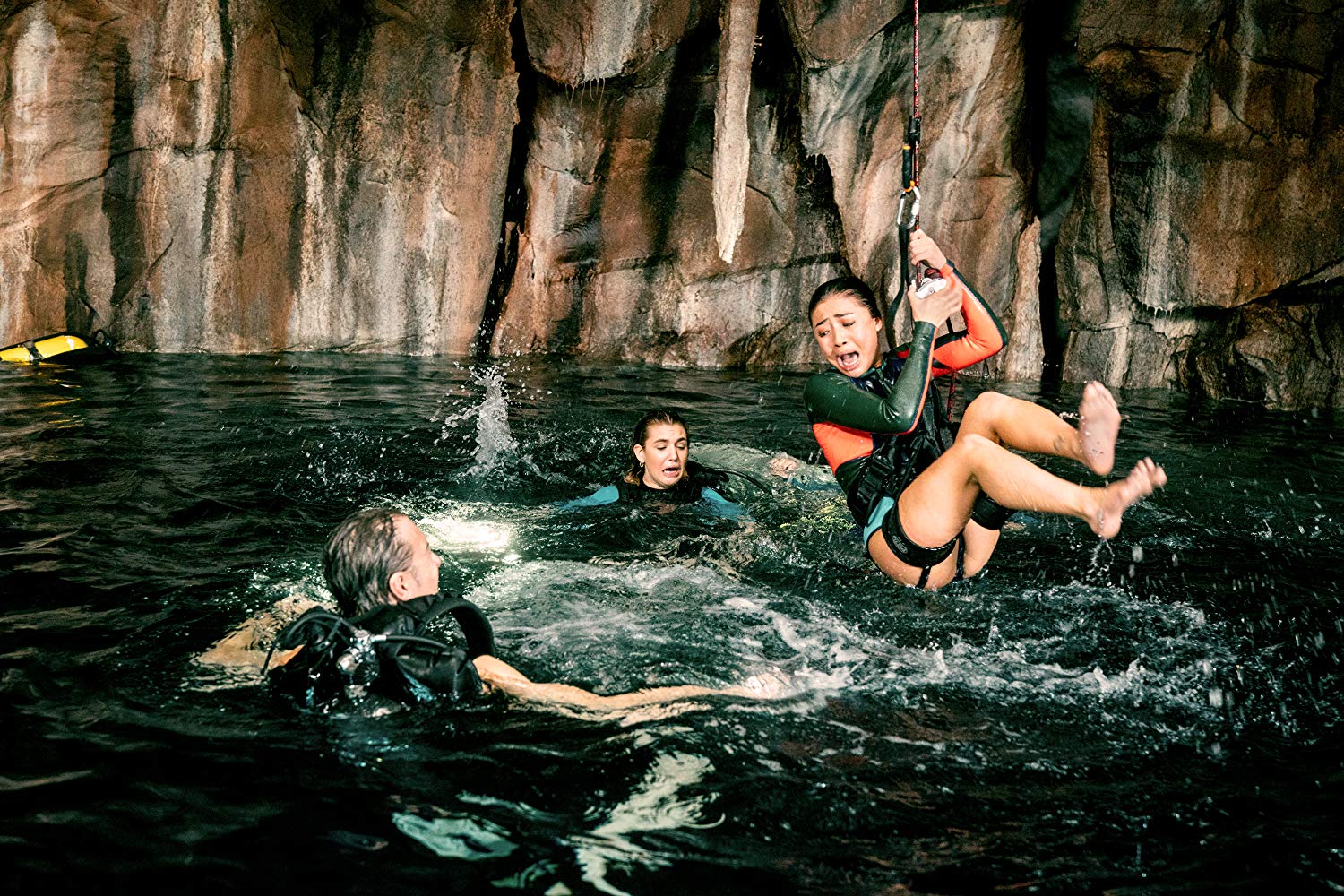 But once the teen crew takes their unwittingly sacrificial plunge into the murky depths, the action plays quite well at times. We are provided far more fodder than the first was designed to produce, allowing for more direct engagement from the sharks without taking out our leads too soon. The dark, murky, and enclosed environment works as its own tool for tension, developing strong senses of claustrophobia. It becomes its own monster. Though it was done to much greater effect, the usage of the environment reminded me of The Descent. That gruesome horror flick shares a great deal with Uncaged, to the point that it’s almost sensible to compare the two. But at the end of the day, The Descent is such a superior product of true horror that it feels like a disservice to even mention it in the same breath.

Uncaged doesn’t fall into the dull trap of its predecessor, but still takes little risk while it wades in the kiddie pool of traditional horror tropes. Though these tropes are effective at times, it still makes the film’s overall product too familiar. Sharks are still scary and this film gave us glimpses of why so many of us are instinctually afraid of open and/or dark water. But at the end of the day, the predictable material simply conjures nostalgia for better times of being scared to go into the water.

Did you see 47 Meters Down: Uncaged? How did it fare against its predecessor? Sound off in the comments below.

Virginia Drive-In Theater Re-Opens on May 1