"We All Have Our Secrets, His Just Happens to Be… A Recipe for Seduction.”

Just in time to keep the holiday spirit alive, Lifetime and KFC have teamed up to bring fried chicken lovers a mini-movie of epic proportions. The movie will air on December 13, and as far as we can tell, it's going to be ... spicy. 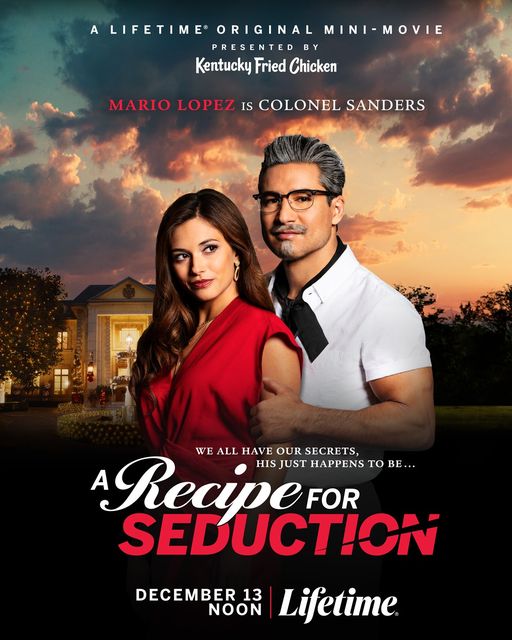 Titled A Recipe for Seduction, the mini-movie stars Mario Lopez as a young Harland Sanders and tells the story of a young heiress, her handsome beau, a new chef, and a secret recipe. Read the synopsis below:

“As the holidays draw near, a young heiress contends with the affections of a suitor handpicked by her mother. When the handsome chef, Harland Sanders, arrives with his secret fried chicken recipe and a dream, he sets in motion a series of events that unravels the mother’s devious plans. Will our plucky heiress escape to her wintry happily ever after with Harland at her side, or will she cave to the demands of family and duty?”

And check out the bizarre trailer for yourselves:

We're not sure where to start with this one, and we're not brave enough to attempt the why. Any kind of Lifetime holiday movie is going to get some views, and we know Lopez feels right at home in the melodramatic role. Whether or not the facial hair is real, or if Lopez will continue his role as a young Colonel Sanders, remains to be seen.

A mini-movie may just be a fancy way of saying "extended commercial," and it certainly has gotten a lot of attention since the news came out. Lopez sure takes the Colonel in a whole different direction than we have ever seen him—trust Lifetime to make fried chicken sexy. We're not sure if we're hungry for chicken or Colonel Sanders (and that's a sentence we never thought we'd ever write!).

Take a peek at what the good people of Twitter have to say about it:

This is either going to be the greatest thing of all time, or the absolute worst. No in-between.

A.C. Slater growing up to be Colonel Sanders is something I did not have on the bingo card this year.

Some suggestions...
—Josh Duhamel in McDonald’s “A Special Sauce of Lust”
—Freddie Prinze Jr. in Burger King’s “A Royal Affair”
—Alyson Hannigan in “Wendy’s Choice”
—John Stamos in “That Thing That Happened Behind the Del Taco”

Will the show reveal the 11 secret herbs and spices. If so, I'm in 😂

What do you think of Lifetime and KFC teaming up to bring us this Colonel Sanders mini-movie? Will you be tuning in? Comment below.