After a COVID-fueled, movie-free summer, any blockbuster trailer would receive a ton of attention. And the new Dune trailer has gotten just that. Since its release on YouTube last Wednesday, the trailer has garnered well over 22 million views and has spawned hundreds of other videos discussing the trailer itself.

Dune is based on the seminal 1965 novel of the same name by Frank Herbert. The book, which is to science fiction as Lord of the Rings is to fantasy, tells the story of the rise of Paul Atreides.  It’s known for its massive scope, intensive world-building, and complex narrative, so the upcoming movie is not likely to cover Herbert’s entire masterpiece.

What is most striking about the trailer, other than the star-studded cast of Timothée Chalamet (as Paul Atreides), Oscar Isaac, Zendaya, Jason Momoa, Javier Bardem, and Josh Brolin, is the way the movie is shot. The gray, storming planet of Caladan (Paul’s homeworld) is contrasted with the harsh yellows and blacks of the desert plains of Arrakis (Dune). Thematically, there seems to be very little room for the humor and sly winks to the audience that are common in the science fiction presented by the Marvel Cinematic Universe. The Dune trailer telegraphs the seriousness of the movie, alluding to its themes of race, gender, environmentalism and power.

The trailer also delivers on two iconic features from the book: The first is the line, “Fear is the mind-killer.” Spoken by a different character in the movie than in the book, it is one of the most famous lines in the Dune series, if not in all of science fiction. Hearing that sentence in the trailer was enough to make the hair stand up on the back of my neck, but I hope the entire quote makes it into the movie:

"I must not fear.  Fear is the mind-killer.  Fear is the little death that brings total obliteration. I will face my fear. I will permit it to pass over me and through me. And when it has gone past I will turn the inner eye to see its path. Where the fear has gone there will be nothing. Only I will remain." 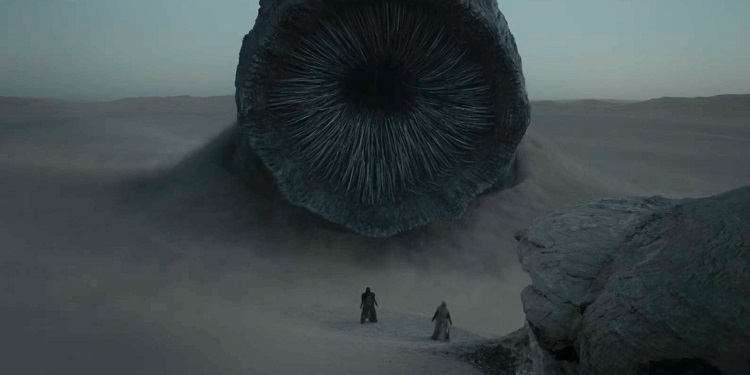 The other feature the trailer nails, to the joy of fans everywhere, is the appearance of sandworms. The worm that stares down Paul is perfect in its massive scale and superficial emotionlessness. The sandworms of Dune represent another building block of modern sci-fi, and to see them done right is truly a thrill to see.

What do you think? How excited are you for Dune? Let us know in the comments!