Chain with a cult following is planning to open locations in the metro area.

You may be asking, "Another convenience store?" "Aren't 7-11s every half mile all we need?"

People who have experienced QuikTrip (QT) laugh in those questions' faces. Fans seem to love this place (even so much as to stop by on their wedding day?), and those who have moved to Denver have been waiting for the chain to make an appearance. QuikTrip answered their prayers, making the announcement on Twitter to much fanfare.

The chain has been eyeing our state for quite a while, but once convenience and grocery stores were able to sell full-strength beer, it solidified the deal.

“The Denver metro area is really hot in terms of population growth," QT spokesperson Mike Thornbrugh told CSP Daily News. "Those are the kind of markets that QT thinks we have a really good opportunity to be successful. With that type of population base, we think it could support a lot of our stores over a period of time."

So what's all the hoopla about? Let's start with the soda fountain worthy of the gods, which carries a much larger selection of beverages than your standard convenience store. QT's website says that it was the first retailer ever to offer self-service fountain drinks, so it takes it pretty seriously. You can get both Pepsi and Coke products, with a wide variety of choices. And don't forget crushed or cubed ice, as well as several flavorings to choose from.

There is also an extensive slushy, coffee, cappuccino, and hot chocolate selection.

In addition, the food isn't your standard gas-station gut buster. Some locations have a full-service kitchen, called QT kitchens, that puts out a pizza that has garnered rave reviews. 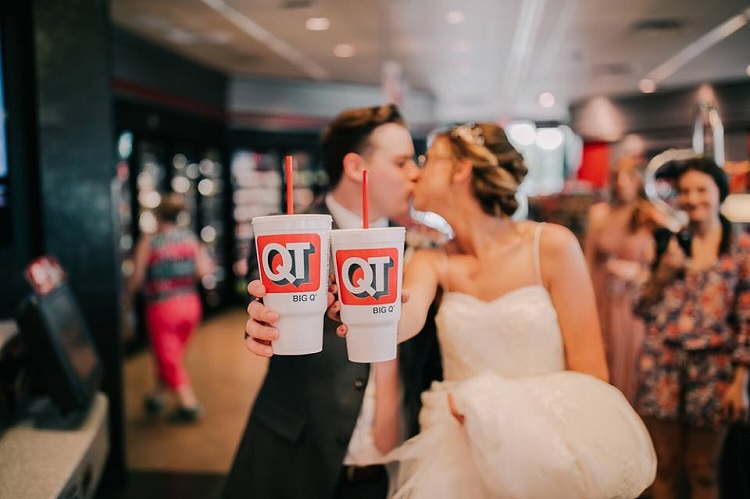 I guess you really can buy it all at QT, including true love. Courtesy of QT (Facebook).

While you are filling up on food and beverages, QT will also help you fill up your car with Top Tier gasoline and keep its tires aired up for free.

Fans often rave about the friendliness of the staff and overall cleanliness of the locations. The company also seems to be one of the good ones, giving back a percentage of profits to local communities, supporting several nonprofits, and consistently ranking as a top company to work for.

In all, it sounds like a pretty great place to check out. So far, there is no word on locations or opening dates of the Denver-area stores. But we know QT is coming, and fans are all in.

"QuikTrip please open up a shop in Denver so my friends' eyes can be opened to how revolutionary your gas station is," - excited Twitter user.

Are you a fan of QT? Let us know what sets it apart in the comments.