McDonald's Is Forming a Broken Ice Cream Machine Focus Group, But This Guy Is Taking Matters Into His Own Hands

McDonald's Is Forming a Broken Ice Cream Machine Focus Group, But This Guy Is Taking Matters Into His Own Hands

There's a website that displays a map of all broken McDonald's ice cream machines nationwide.

If there are two things McDonald's has built a solid reputation on, it's serving up the best french fries—and having an ice cream machine that is always broken. There's honestly nothing more irritating than ordering a McFlurry, only to be told that the ice cream machine is down. Surely, one would think that it's about time McDonald's stepped up to the plate to fix their iconic ice cream machine issue, but leave it to the internet to push owners into enacting change.

Thankfully, there are a couple of things in the works that might help solve the problem.

Select McDonald's franchise owners are dedicating their efforts to finding a solution for perpetually broken ice cream machines. A recent meeting—a summit, if you will—gathered the amazing minds of McDonald's franchisees into forming the National Supply Leadership Council equipment team, which will be a focus group whose mission it is to improve and find solutions for the chain's soft-serve ice cream machines.

Even before the ice cream machine rescue team was formed, however, franchisees had been taking matters into their own hands and using a device from soft-serve ice cream machine diagnostics company Kytch to help identify the specific problems with their individual restaurants' ice cream machines. Obviously, McDonald's franchise owners are meeting the challenge; the people simply must have their ice cream!

But then, there's this guy.

Out of pandemic blues, pure curiosity, and giggles, a 24-year-old software engineer named Rashid Zahid set out to see just how accurate the brand's reputation of having a broken ice cream machine was—and thus, mcbroken.com was born. 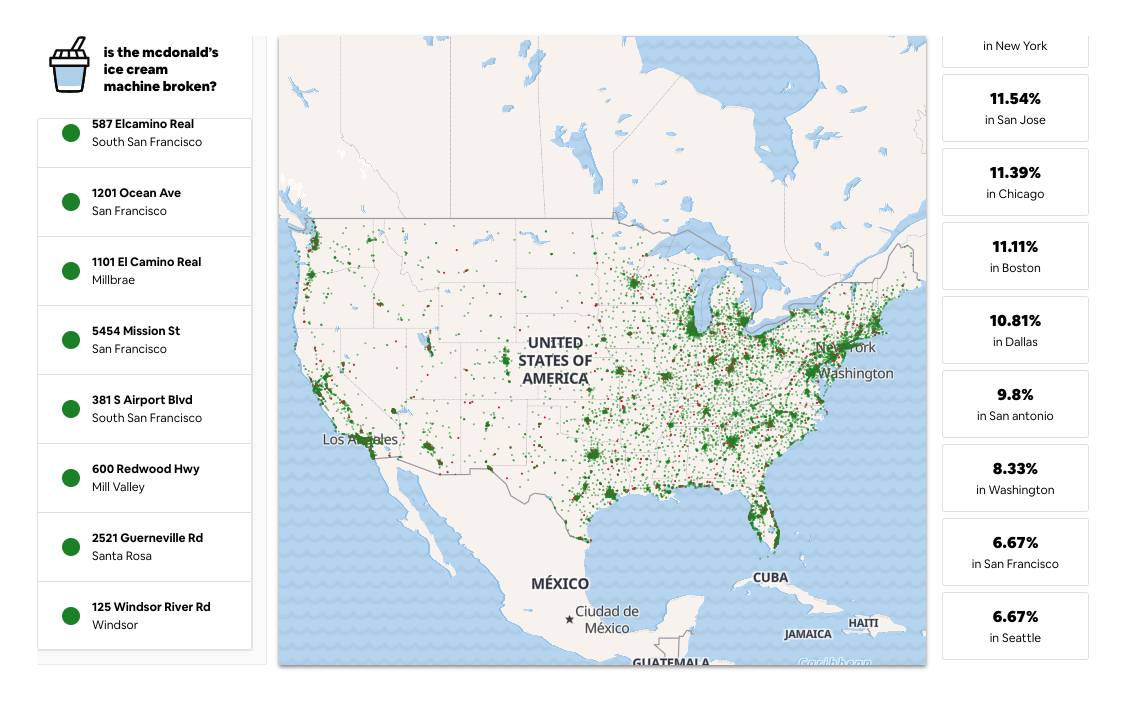 His efforts started in Berlin, where he built a bot that scoured the city's McDonald's locations via the McDonald's app. His bot was simple; he programmed software to see how many McDonald's locations would allow him to purchase a soft-serve ice cream treat through their app. When the app caught on to his antics, it labeled him as a bot, so he had to do some tweaking in order to continue the experiment.

Once Zahid figured out a new timeframe of when to have his bot add a soft-serve item to his shopping cart (every 30 minutes instead of 5 minutes), Zahid was able to collect his data.

With his data in hand, he launched the website McBroken.com in Germany first, where he had his bot analyze 1500 McDonald's locations. If he tried to place an order for a soft-serve item at McDonald's and was unable to because the item was "currently unavailable," this was an indication that the machine was broken.

A location with a broken ice cream machine was labeled with a red dot on his website, while a location with a working machine was labeled with a green dot. After further troubleshooting to test the website's accuracy, coupled with Twitter users confirming the results, Zahid was ready to make it go live in the United States. Zahid shared with The Verge.

"I was like, this would be pretty interesting for Germany, but it would be amazing for the US, which is basically the capital of McDonald's."

In less than half an hour after going live, his site hit 10,000 visitors. Now, McBroken is an interactive app that lets users search their neighborhood (or the United States if they're feeling curious) for broken McDonald's ice cream machines. There's even a neat feature that breaks down the percentage of how many machines are broken in different cities. 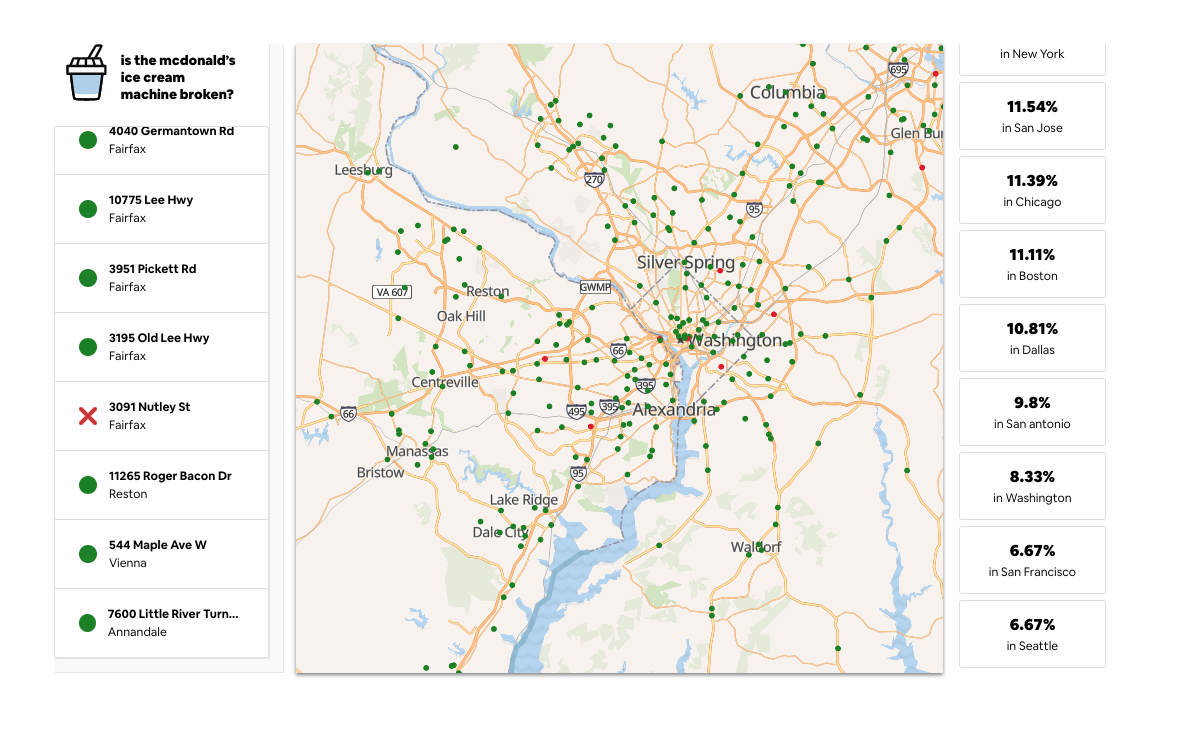 The status of Washington, D.C.'s ice cream machines, according to mcbroken.com

McDonald's response to this unusual civic duty? Well, the VP of the restaurant's U.S. Communication tweeted in praise of the young man's dedication.

Only a true @McDonalds fan would go to these lengths to help customers get our delicious ice cream! So, thanks! We know we have some opportunities to consistently satisfy even more customers with sweet treats and we will.

While 2020 continues to rage on in all its disappointment and bad news, the unified dedication to ending McDonald's long-standing broken down ice cream machine reputation might finally be the silver lining we didn't know we needed.

SEC votes unanimously to invite Texas, OU to the conference