A block off the Chesapeake Bay, Pleasure House Brewing’s convivial tasting room was filled with twilight and patrons during my recent Saturday evening visit. I nabbed the last empty table. A quick scan revealed young families with kids, men and women of all ages, and a 20-something birthday party in progress, back by the dart board. The room had a good vibe.

But, duty calls! Up at the bar, publican Tim O’Brien, one of the establishment’s four owners, hooked me up with a flight of 11 different samples, one from each tap. Good thing my tasting helpers had arrived back at the table – Andy, David, Jamie, Samantha, and her pooch Skeeter (the brewhouse is dog-friendly). Jamie and Sam had also booked a second flight. 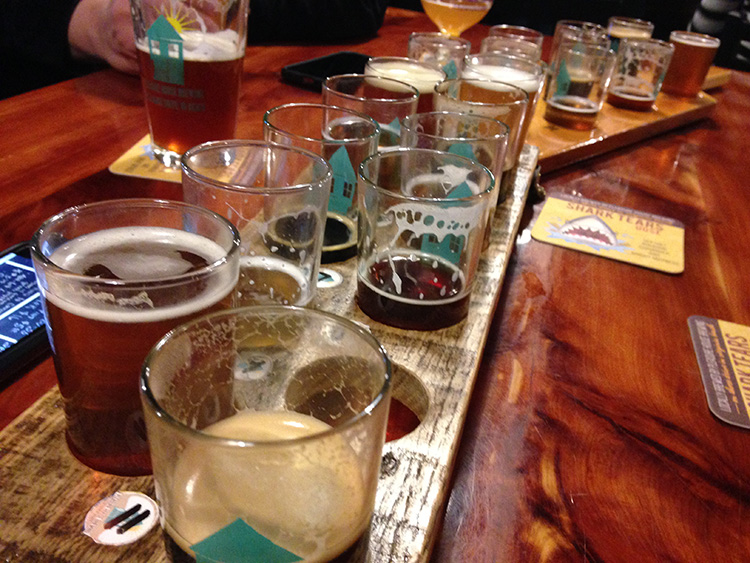 Tim filled me in about food. They don’t bring in food trucks or vendors, he explained, but "BYOF" at Pleasure House is not only okay; it’s encouraged! Menus from local eateries are on the tables – pizza, hot dogs, Chinese – so customers can order delivery, or they can simply bring some food from home. The birthday party folk had done just that and set up a table with crock pots and other potluck-style fare for themselves.

“Hey, you could bring your grill and cook a steak from your tailgate if you wanted to,” Tim said. “I’ll bring a steak and join you!” I think he was serious.

Pleasure House brews all their beer on the premises and distributes them throughout Virginia. They rotate through new and favorite brews at the tasting room, so there’s something for every visiting beer lover, as well as a wide variety for the adventurous drinker, like me. Indeed, my taste buds got a complete workout as the flight included some bitter, sweet, and sour beers, spicy Belgian-style ales, and coffee-flavored stouts. We rolled up our sleeves and dove in (except for Skeeter, of course, who was content to sit next to me and nap with his head on my leg).

I first tried Jumping the Shark Sour Ale, on owner and brewmaster Drew Stephenson’s recommendation. I was curious to find the strawberry and apricot flavors he mentioned. Found the latter but not the former. I thought it interesting, but the rest of the table admitted with their facial expressions they weren’t sour beer fans. And boy was this one sour, as was the similarly named Shark Tears Sour Gose.

Next up, Moony’s Irish Extra Stout – a good choice to chase the sours with. Andy, the home brewer of the table, thought it had stronger coffee notes than he expected from an Irish stout. We followed it with the Lynnhaven Coffee & Cream Stout, which my table later declared unanimously as their fave of the night.

Sam: "It’s like a lighter stout, and it smells good!"
Andy: "I like that! The coffee isn’t bitter."
Jamie: "It has an aftertaste like you just had a good cup of coffee."

Their thoughts corroborated what Drew had told me earlier – popular demand had landed Lynnhaven Coffee & Cream Stout a permanent spot on the tasting room’s board.

The Grommet CAP Pilsner found the Lynnhaven a tough act to follow. David's comment was the most generous: “I don’t know what to think of it.”

Quickly reaching for the Snatch You Baldheaded Spiced Belgian Quad, Sam, Andy, and I were happier with its complex flavors. We detected delightful notes of banana and dried fruit amidst the highest alcohol content of the evening’s samples, at 12.5%.

Next up, the grapefruit hoppy Red Mill Seven American Red. I chalk up Jamie’s puzzling comment, “Tastes like freedom,” to the hazards of recreational beer tasting. Our beer flight came in for a smooth landing with the Spring Is Coming Saison (strong cardamom and lime flavors), Wallasey Rugby Club English Bitter (old, earthy hop taste that Andy thought was perfect to style; David mused it would go well with a nice Scotch), Rudee Inlet IPA (citrusy, grapefruit hoppy), and Liquid Communication Belgian (lingering, smooth caramel finish). Get more info on all these beers here.

Tim recommended I check out their weekly event, Crock for a Cause, on Sundays at 6 p.m. Bring in a dish to enter the contest (winning dish gets a $40 gift card to the brewery), or just come in to eat ($5 donation) and drink beer. All proceeds go to k9newlife.org, a local no-kill dog rescue that gives all breeds a second chance when they have run out of time at a shelter or are too injured or sick for the shelters to handle. Visit the website and you'll probably find yourself a new best friend.

Got a brewery you want me to visit next? One of your favorites or one you just want to know more about? Please let me know in the comments!