If you're looking for a gift for the retro-chic and quintessential gamer in your life, Nintendo would love for you to consider their new handheld. The original Game & Watch (1980) was the first handheld gaming device Nintendo ever made, but this throwback release is updated, upgraded, and gold.

Game & Watch Super Mario Bros. is a limited-run collector's item retailing for $49.99 that comes with two pre-installed games: Super Mario Bros. and Super Mario Bros.: The Lost Levels. It also serves as an animated digital clock, has the classic Game & Watch juggling game (this time starring Mario), and is styled in red and gold. The device will hit markets on November 13 and will sell until supplies are gone. You can pre-order here. 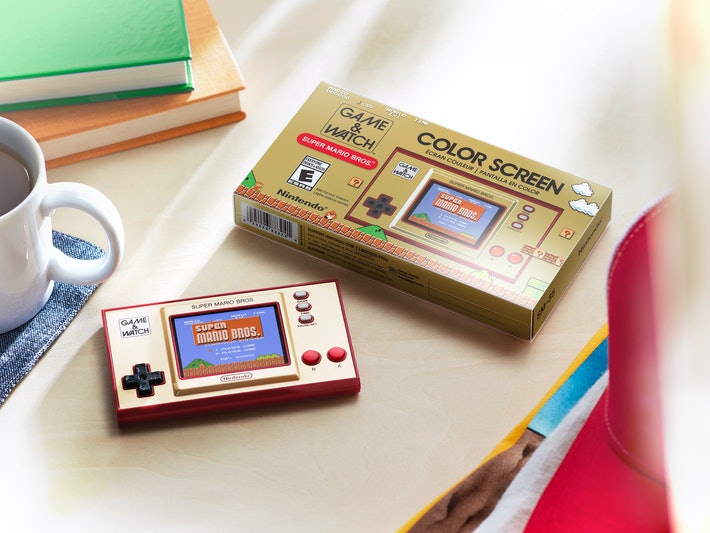 Unlike the '80s Game & Watch devices, this one charges with an included USB-CA cable. It charges in 3.5 hours and plays for 8 hours on a charge.

It's also tiny! While the Nintendo Switch is about a foot long and can be a lot to stuff in a purse or bag, the Game & Watch is about 3 in. x 4 in. That's probably great for small hands and small humans, or discretely playing in public.

It also features a two-player, pass-and-play mode so you can switch off with a friend. The Lost Levels is a welcome addition to the first game that brings 52 more challenge levels as well as new perils like the Poison Mushroom. Luigi also jumps higher in that game!

Should you buy this?

Maybe? It costs much more than what it is—a tchotchke with two 8-bit games on it, and the deliberate limited run is meant to increase its value as a collector's item. There are other (better?) ways to play these games, but there is a charm to the simplicity and aesthetic of a small and dedicated device. For the gaming history enthusiast, it's also a delight to own a piece of lesser-talked-about Nintendo history in a Game & Watch device. Authentic G&W units from the '80s and '90s go for hundreds of dollars online.

It's pretty to look at, though.

What do you think? Good gift, or cash grab? Comment below!