Denver-Lakewood-Aurora, Boulder, and Colorado Springs among the top-ranked.

In a new study by CompTIA, Colorado is among the best of the best for tech workers. The Top 20 Tech Towns study based its results on salaries, job availability, growth, and cost of living. The Denver-Lakewood-Aurora ranked 8th best in the country for tech workers, Boulder comes in at No. 19, and Colorado Springs rounded out the list at No. 20.

In addition, Colorado and North Carolina were the only states that had three cities on the list. In total, the top 20 cities are spread across 14 states and the District of Columbia. 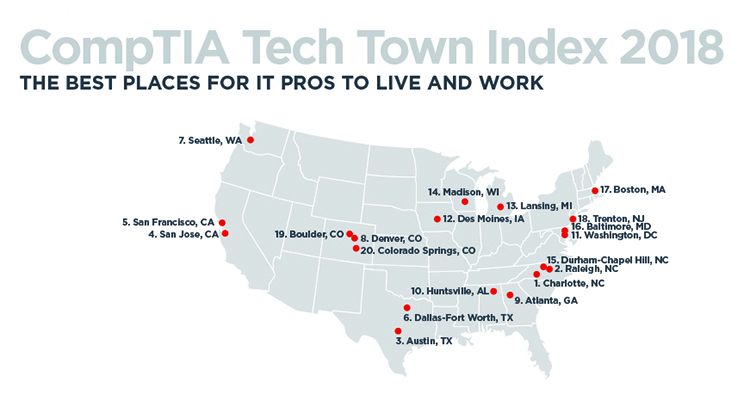 Denver’s focus on start-up support and growth, Boulder’s university community, and Colorado Springs’ military network of technology and educated workers are just a few reasons behind their top rankings.

The report did make note of Colorado’s high cost of living, around seven percent to about 15 percent higher the national average, but pointed to other amenities like outdoor activities, etc., that have resulted in fast growth.

The Denver-Lakewood-Aurora area posted 50,897 IT jobs between August 2017 and July 2018. That number is expected to grow another 11 percent in five years. Boulder and Colorado Springs job growth in the industry are both projected at five percent over the next five years.

The report looked at job posting data over a 12-month period, focusing on metropolitan areas with populations greater than 250,000. While this is the first report of its kind from CompTIA, it is projected to be released annually.

Denver ranked the 11th most fun city in the nation!