Most likely, in Novembers past, your social media feed has featured at least one friend attempting to sport new facial hair as part of the "No-Shave November" or "Movember" movements.

Maybe you haven't understood it, though. I mean, are they trying to grow out a mustache or beard to look somewhat more "Pilgrim-ish" in honor of Thanksgiving? Or is it an attempt to keep their face warmer as the weather grows cold? What's the point behind it?

Well, OCN to the rescue! We've got the deets on what Movember and No-Shave November are all about—and what the difference is between the two.

At its core, No-Shave November is all about health—about "growing cancer awareness and raising funds to support cancer prevention, research, and education."

Participants are encouraged to put down the razor for 30 days and let their locks flow freely from every follicle, donating any hair-maintenance expenses that are saved throughout the month to the cause. But this movement isn't just for men. In addition to beards and mustaches, participants could choose to let that leg hair grow or even forego a haircut or waxing. Any and all can be part of one's personal No-Shave November campaign.

Meanwhile, No-Shave November will be working alongside the Prevent Cancer Foundation, Fight Colorectal Cancer, and St. Jude Children's Research Hospital. They also have some groovy merch on their website, so make sure you take a look.

On the flipside, "Movember" is decidedly about men's health and specifically encourages the growth of a mustache to raise awareness and funds for the research and prevention of prostate cancer, testicular cancer, mental health issues, and suicide. According to the Movember Foundation's website,

"We are the leading charity changing the face of men’s health. We know what works for men—and what doesn’t."

So, since 2003, the organization (which originated in Australia) has been working hard to change those statistics with an ultimate goal of reducing the number of male premature deaths by 25 percent by the year 2030. They do this by helping to support and fund a number of health projects (1,200 to be exact) in 21 countries around the globe. And participants are all a part of that success!

Joining the movement to "have an everlasting impact on the face of men's health" (get it?) is simple:

Now, if you need some advice for growing your mustache, don't fret—the Movember Foundation's got you covered! Of course, there are detailed, super-helpful grooming and styling tips available for the mustache novice, but first, you must decide on your mustache design. Check out these great styles: 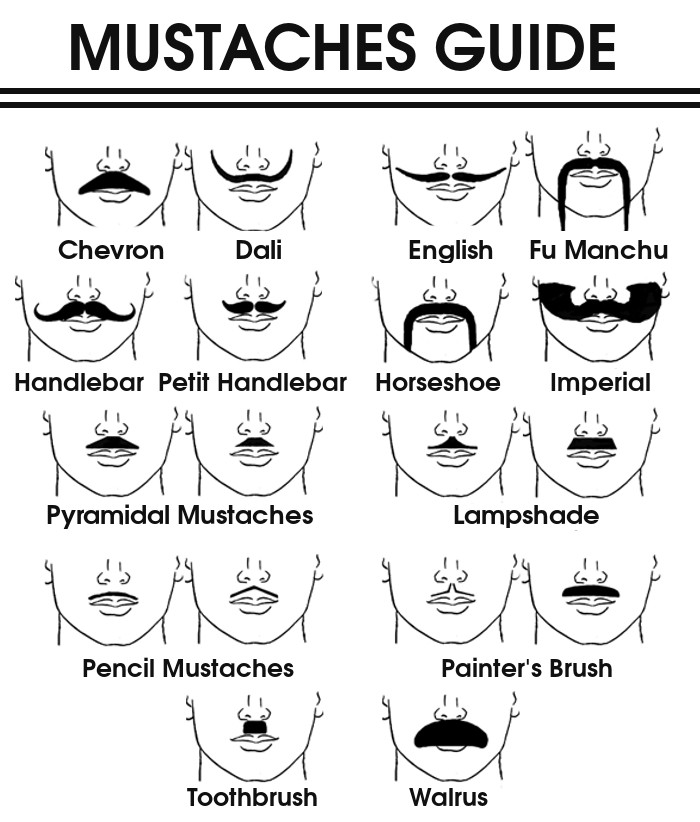 And here's something to look forward to:

"A one-month-old mustache is capable of holding approximately 30ml of liquid or around 10% of a glass of beer before leaking its contents down the face of the owner."

Lovely! Check out more important mustache history and facts here! Need further inspiration? I'll leave you with this video, from the hilarious film "A Million Ways to Die in the West":

**Another interesting fact for spelling nerds: While the famous ribbon of facial hair across the upper lip is most commonly spelled "mustache" in American English, other English-speaking countries spell it "moustache," hence the difference between our well-written article and the Australian-born Movember Foundation's online literature.

***Also, the first two letters of "moustache" are the reason behind the word "Movember." You're welcome.

Will you be participating in No Shave November or Movember? What health cause is most important to you? What's your fave mustache style? Leave a comment below, and let's get the conversation started!

12 Adult Life Hacks No One Ever Tells You