All the Viral Hoaxes We Survived With Hurricane Florence

All the Viral Hoaxes We Survived With Hurricane Florence

After much fanfare as we prepared for the disaster of a lifetime, Hurricane Florence hit North Carolina on Friday as a Category 1 storm. The storm was expected to break ground as a Category 5 hurricane of historic proportions, and at the advice of experts, Virginia, Maryland, and D.C., virtually shut down in anticipation of the hurricane's wreckage, anxiously awaiting Florence's destruction with bated breath.

But in a generous aversion of meteorological prophesy, the disaster we readied for never came our way. While North Carolina was hit on Friday with a less-climactic but still devastating Category 1 storm, the northern states were left mostly unscathed -- shaken, but lucky.

But if we didn't get the worst of the hurricane in our state, we did get plenty of hoaxes. As the omnipotent Nigerian Prince scheme demonstrates, times of misfortune are easy to exploit -- and wildly inflate.

Here are five of the most ridiculous viral hoaxes that ran rampant in the chaos of Hurricane Florence.

One year ago, in the wake of Hurricane Harvey, Twitter "journalist" Jason Michael McMann fired out a tweet containing a picture of a shark swimming down a freeway. "Believe it or not, this is a shark on the freeway in Houston, Texas. #HurricaneHarvey,” he wrote.

Last week, he sent out a nearly identical tweet, this time about Hurricane Florence. "Believe it or not, this is a shark on the freeway in New Bern, North Carolina. #HurricaneFlorence," he wrote in classic form. Once again, the hoax worked. 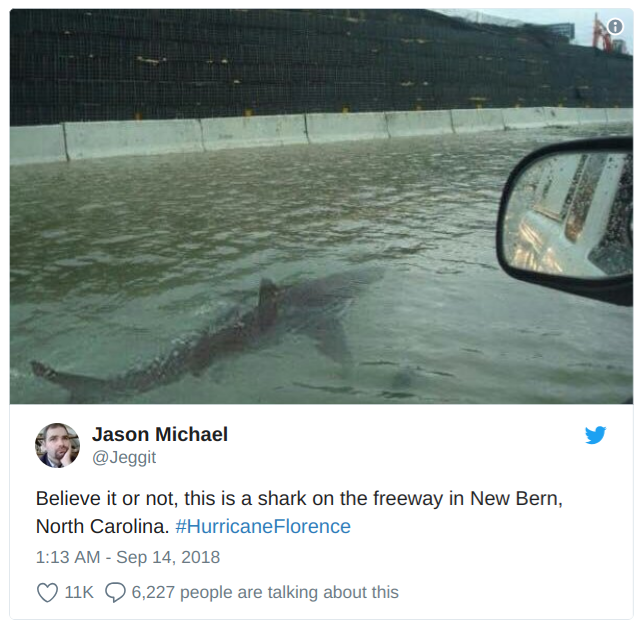 Shortly afterward, a fake TV broadcast image reporting the "breaking news" that Hurricane Florence now contained sharks began circulating on the internet. The image was created with the fake TV-headline generator "Break Your Own News."

While most seemed to understand that the image was a hoax, not everyone got the joke. The tweet and "news" headline got so much traction that FEMA themselves issued a statement debunking the claim.

“There are sharks in the water, that’s not a rumor. But, you know, I don’t think there’s a sharknado effect or anything like that,” Jeffrey Byard, Associate Director of FEMA's Office of Response and Recovery, said in response to reporter questions. "Rumors are going to happen.”

The claim "Hurricane Florence Now Contains Sharks" was debunked on Snopes.com. Jason Michael McMann, its original perpetrator, says he has no regrets.

2. Shoot Your Gun qt the Hurricane to Scare It Away

More than 30,000 people joined a fictional Facebook event planning to all converge on the city of Richmond and fire their guns at Hurricane Florence. Obviously, the event was humorous in intent, part of a trend of promoting outlandish strategies to fend off the hurricane. 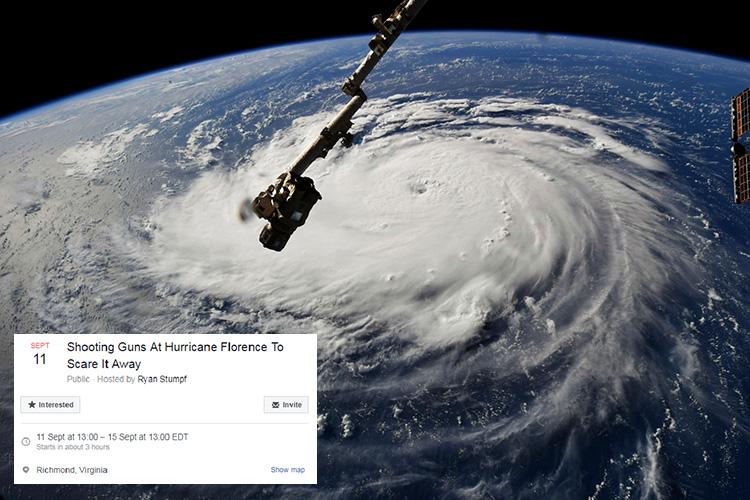 Courtesy of The Sun

However, once again, not everyone got the joke.

“Do not actually discharge firearms into the air. You could kill someone and you cannot frighten a hurricane," the event organizer wrote to would-be participants. "I can't believe I actually have to write this."

In the past, law enforcement officials have had to get involved to warn people against taking this action.

"To clarify, DO NOT shoot weapons @ #Irma," the Pasco County Sheriff's Office tweeted during Hurricane Irma. "You won't make it turn around & it will have very dangerous side effects."

However, the attendees of "Shooting Guns at Hurricane Florence to Scare It Away" were good sports.

3. The City Will Come to Your House and Force You to Evacuate

After mandatory evacuation orders were issued in Norfolk, a group of vigilantes (or malicious pranksters?) donned fluorescent vests and took to the streets, knocking on residents' doors and ordering them to leave their homes. The neon-vested "officials" claimed to work for the city. But the City of Norfolk said it had no idea who these people are.

“People were going around in fluorescent vests and going to residents in Zone A basically forcing people to leave their homes,” Norfolk City spokesperson Lori Crouch said. She emphasized that no city official will ever force you to leave your home. "That's absolutely a personal decision."

It is unclear if anyone fell victim to the neon-vested figures' urgings, but a large number of residents reported the fake city officials to Norfolk's city careline and issued complaints on the app Nextdoor.

4. All Emergency Shelters Are Legally Required to Admit Your Pets If You're Evacuating

This false claim was widely shared on social media by many well-intentioned but dangerously misinformed animal advocates. The viral social media post depicting this false claim that hotels and shelters must house your pets originally surfaced during Hurricanes Harvey and Irma in 2017, then made a comeback this September with Florence. 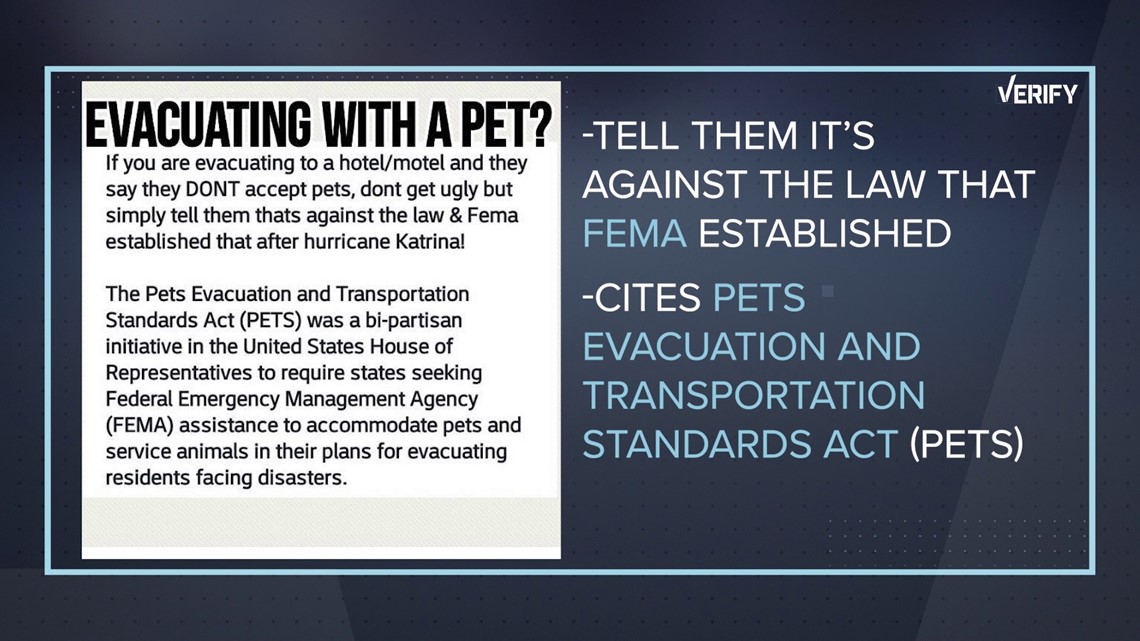 The post cites a real law requiring that some shelter options may be made available for people with pets, but the law does not require every shelter or private business to accommodate them.

This misconception was so widely quoted to officials that FEMA debunked it on their Hurricane Florence Rumor Control webpage:

"Private businesses, such as hotels, are not required to accept pets," FEMA states in its Rumor Control FAQ. "Not all shelters accept pets. Hotels and motels participating in FEMA’s Transitional Sheltering Assistance Program do not fall under the PETS Act. Check local media, or contact your local emergency management agency for shelters that do allow pets."

5. Stay Out of Hurricane Flood Water Because It Will Give You the Black Plague

The Black Plague was a medieval disease that killed approximately one third of the European population in the 14th century. The last instance of a plague pandemic ended in 1894. While the disease still exists in remote parts of Africa and small-scale isolated outbreaks, for the vast majority of living residents, the disease is basically defunct.

It is difficult to explain how nonexistent of a threat this is, other than by restating the fact the last known plague pandemic was in 1894. And more importantly, the last time it was considered a serious threat to society, we still used Bibles as medicine, English sounded like the text of Beowulf, and we had not yet invented the printing press.

Once again, the only thing you really need to know about the Black Plague is that you are not going to get it.

It is unclear where exactly this rumor began to spread, other than probably less-policed corners of Facebook and geriatric email chains. However it got started, the myth that hurricane flood water gives you the Black Plague was addressed on FEMA's Rumor Control fact-checking list. After originally circulating with Hurricane Harvey, FEMA updated its plague-debunking reminder this September.

"There are reports that floodwaters bring a danger of plague," FEMA says. "This is false. Plague is rare in the United States. It is spread through fleas, not floodwater. CDC is not expecting to see an increased risk of plague from [hurricanes]. Visit the CDC plague resource page for more info."

Good news, all: Hurricane Florence does not contain sharks nor the Black Plague -- just a hurricane. You cannot fend it off with your guns. You cannot force the owner of Motel 6 to watch your cat during the storm. And people in yellow vests from the government are not coming to get you.

And if you're ever in doubt about the authenticity of anything, just remember Snoop Dogg's mantra for us all: Google is free.

New Snapchat Filter Turns Your Dog Into a Disney Cartoon