Apparently, unicorns, pizza slices, and flamingo pool floats are a thing of the past.

A quick Twitter scroll confirms that only the coolest of cool kids will be carrying around oversized, millennial-pink, coffin-shaped pool floats this summer. (Erm, thanks, but no thanks.) Designed by Andrew Greenbaum and Ian Felton (the creatives behind Pom Pom Floats), the creepy inflatable features raised edges and a removable lid. (Because there’s nothing more peaceful than floating around an open body of water with a plastic lid covering your face, #amirite?)

According to Greenbaum, the duo began working on the coffin-shaped float concept three years ago. 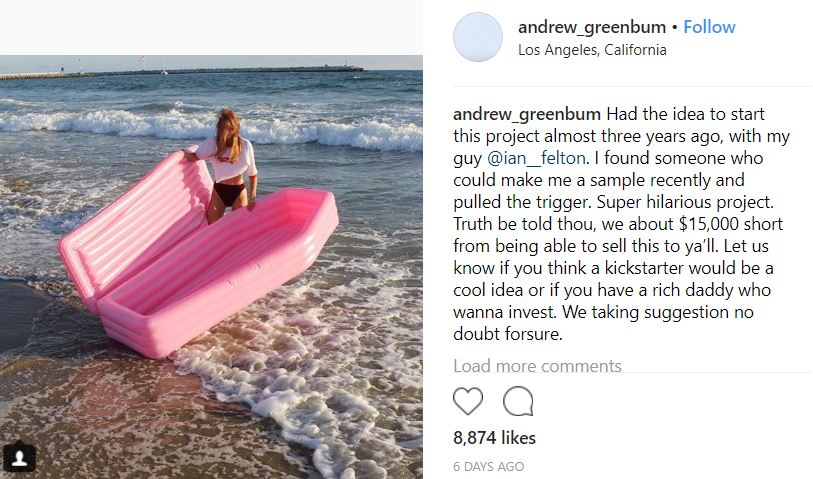 “Had the idea to start this project almost three years ago, with my guy @ian__felton,” Greenbaum wrote on Instagram. “I found someone who could make me a sample recently and pulled the trigger. Super hilarious project. Truth be told thou, we about $15,000 short from being able to sell this to ya’ll. Let us know if you think a Kickstarter would be a cool idea or if you have a rich daddy who wanna invest.”

Check out the coffin pool float that has everyone on the internet dying.

Since Greenbaum’s post went live, thousands have commented on the killer summer accessory.

“I have never seen something I want more,” Twitter user @shaaaychristine wrote. “A pink coffin pool float… this is my whole being in an object.”

“To be buried in a floating coffin that says you’re dead, but you’re also up for a summer party, wherever you may go,” Twitter user @BluntB0dkin added.

If you’re interested in purchasing Pom Pom Floats’ coffin floatie, you can sign up to be one of the first to do so here. As for me? I think I’ll stick with my Narwhal pool float.

Would you rock a coffin-shaped float? Let us know what you think in the comment section below!

DOT Changes Rules on Emotional Support Animals on Flights; Only Dogs Will Be Allowed

Your Live Christmas Tree Might Be Crawling With Bugs