Quite Possibly the Most Powerful Combination on Earth

*This is a personal account and the content shared may be difficult for some readers. But, here at Our Community Now, we believe it's an empowering story worth telling.*

These are just a few of the hundreds of threatening and demeaning statements I have heard from strangers online, while walking on the street, and even a former boyfriend. I’ve also been groped, grabbed, followed, and harassed by men known and unknown who, for some reason, felt that I deserved to be touched without my consent and that their actions were somehow socially acceptable. Since the age of thirteen, I have been privy to some form of harassment. Almost two decades of unwelcomed interaction has left me always on my guard and trusting my gut over my heart.

I was twenty-four when I entered into a relationship with a man who triggered a niggling feeling that I had never experienced before. He was thirty, had a great job, and we had a lot in common. I was lavished with gifts and compliments early on and when taken four hours away to a remote country resort to celebrate my twenty-fifth birthday, he started hitting me. I wanted him to stop, but he just smirked and said there was no way he was hurting me. The welts said otherwise. I didn’t realize at the time I experienced what psychologists call “gaslighting”, his downplaying of his actions and convincing me that I was fine and I was overreacting. Years later, I realized how wrong this was and I was being victimized by someone who I thought cared about me.

In terms of having an abusive partner, I’m one of the lucky ones. When was the last time you read about a woman who took out a restraining order on a partner only to have been murdered in retaliation? Chances are, it was fairly recent. According to statistics, around 1.3 million women are abused in some form by a partner, and those are just the cases that have been reported. To a violent partner, a restraining order is just a piece of paper.

As a petite woman, I am fully aware that I don’t pose much of a threat to anyone, known or unknown. I could take self-defense courses but will likely never attain the fighting expertise of Ronda Rousey. I could purchase pepper spray or a taser but I'd have to get close to my attacker to deploy these methods. Because neither of these options are to my liking, I choose to own a gun.

Since purchasing a Ruger .38 Spl+P and taking part in concealed-carry classes eight years ago, I have had to threaten to use my firearm three different times. I didn’t like having to do so, but I felt a sliver of relief each time knowing that if the situation escalated I was prepared. Politics aside, I believe that disciplined ownership and operation of a firearm is one of the most feminist actions a woman can implement. Firearm training courses like The Well Armed Woman provide women-only comprehensive firearm education and training in a safe and welcoming environment. 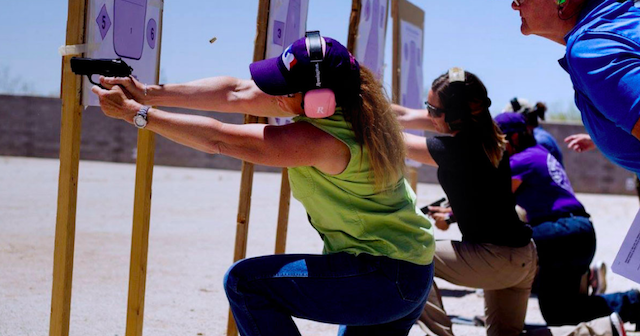 Due to that awful relationship in my twenties, I have held my guard up and have been on the lookout for red flags and the tell-tale gut feeling that tells me I’m in a situation that I need to get out of as soon as possible. With the advent of online dating, this has proven useful time and time again.

So why do we have gut feelings and why is women’s intuition so trustworthy? In Gavin de Becker’s The Gift of Fear, he lists messengers of intuition as follows:

I have met men and women who have given me a sense of unease over the years and with so much information made public via the internet, I have come across more mugshots than I care to admit. Studies have shown that women’s brains have more blood flow in the limbic and prefrontal areas which are home to moods, anxiety, and depression.

As a result, women are more about sensing an issue than seeing one. Don’t believe me? Ask your mother how she just knew you and your siblings were about to do something naughty without being in the room. Ask a devastated wife how she just knew her husband was having an affair without catching him in the act. As for gut feelings, this could be deemed evolutionary. Because our ancestors paid attention to their surroundings and escaped perceived dangers are how bloodlines have managed to survive and thereby passed it down to you.

We don’t live in a perfect world. As much as we’d like to think nothing bad could happen to ourselves or a loved one, each day poses a new threat— visible or not. Personal safety is a responsibility that is all your own, so expect the best but be prepared for the worst. Trust your gut, but have something powerful in your hands, too.

And, ladies, whatever you choose to use in order to protect yourself, Our Community Now celebrates you.

If you or someone you know is in an abusive relationship or a victim of sexual violence, visit Rape, Abuse, Incest National Network (RAINN) or call 800-656-HOPE (4673).

Beginner or advanced, all gun owners need to remember the 5 Principles of Gun Safety