Congratulations! Your Candidate Won! Now What?

Congratulations! Your Candidate Won! Now What?

We're one step closer to getting this over with, so play nice.

You've been hearing about it for months now (really more than that), it's been on everybody's minds but we're not supposed to talk about it in public (apparently social media doesn't count as 'public' in some minds), and now you've done all you can do (you did vote, right?). Election Day has come and gone, and it remains to be seen how long it will take for the whole thing to play out, but the votes have been cast, and the predictions have been made.

Congratulations! The people you were rooting for seem to be ahead! You can now relax and take comfort in the knowledge that your opinion was shared by the people and/or the Electoral College. It's a time for celebration and thinking optimistically about the future. 2020's not over yet, but it seems fitting that it's ending with a major presidential election—the effects of this one will be making a lot of waves in the years to come. This has been quite a year, one that you will almost certainly be talking to your grandkids about.

This is one of the most polarizing times in history, and to say that people have been upset on both sides is an understatement. Whether you're riding the Elephant or the Donkey, there have been some very strong feelings being thrown around. But no matter how long it takes or whether or not the outcome is what you wanted, this is a time for moving forward.

If you never actually read All I Really Need to Know I Learned in Kindergarten, you can probably grab the concept pretty quickly. It talks about “The Golden Rule," the importance of snacks and naps—little things to keep in mind to help you through your day. Remember being a kid and learning about “sore losers”? Then getting your mind blown a little bit by learning that there is also such a thing as “sore winners”?

All of the issues and concerns aren't going to magically go away on November 4, just like life isn't going to do some sort of karmic 180-degree turn on January 1 of next year. But there is something that we all can do moving forward, and that thing is simply to move forward. It's often easier said than done, but it needs to be said because it's also easy to forget that we are all, in fact, in this together.

It's all well and good to talk about bipartisanship and “reaching across the aisle,” but unfortunately, election times tend to bring out the worst in us. All of that camaraderie and good intentions seem to be forgotten as people get obsessed with either pledging to one side of the two-party system or, at least, complaining about the two-party system itself. Are you tired of hearing all of the ruckus? Don't think there is anything you can do about it? There is! You can not add to it. 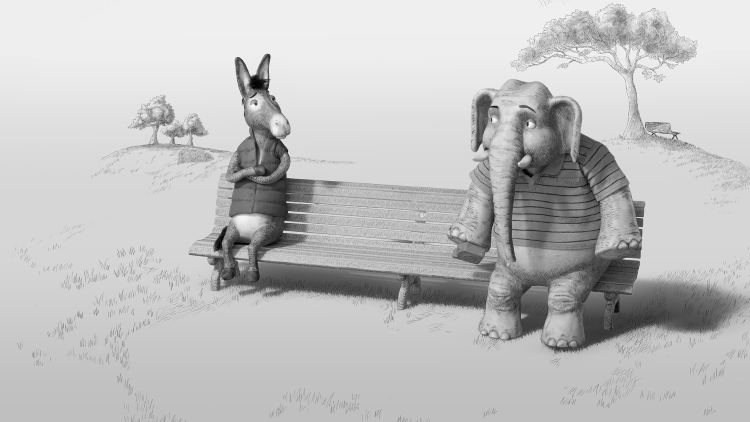 Your candidate has come out victorious—Congratulations! You must be feeling pretty good! Feel free to talk about it with anybody that it won't upset. If there isn't anybody in your circle who agrees with you, there are certainly internet forums that do. You keep on keepin' on with a smile on your face and a spring in your step. What you shouldn't do, is brag, gloat, or generally be a pain to others. Don't start arguments with others that you know didn't agree with you. Don't rub it in anyone's face that they didn't pick the winning team. Don't make people feel bad on purpose. That's a pretty good guideline for life in general, not just post-election society.

If you're reading this even though your candidate didn't win? That's disappointing. You must be feeling pretty let down. If you need to commiserate with others or even complain a little, feel free to do so—as long as it doesn't upset the company you're in. If there isn't anybody in your circle that agrees with you, there are certainly internet forums that do. Keep that chin up, stay positive, remember that although voting is very important, it's not the end-all-be-all of civic duty. You can get involved, even on a local community level, and make your voice heard, and support what is important to you. What you shouldn't do is whine, throw tantrums, or generally be a pain to others. Don't complain loudly to people who didn't ask you to. Don't start arguments or call people stupid for not thinking the way you do. Don't get one of those bumper stickers from the '90s that reads “Don't Blame Me, I Voted for ___.". Don't make people feel bad on purpose.

This election, let alone this year in general, has brought with it a lot of anxiety, and people are still trying to figure out how to deal with it. Again, it's not going to evaporate all of the sudden, and we're not going to be able to pretend that 2020 just didn't happen. But we can try to make the best of what we've got and keep in mind that others, even if they don't agree with us, are along for the ride too.

Anyway, here's a video of some otters juggling pebbles.

How are you doing?  Want to get a drink and talk about it?  Let me know in the comments!