The struggle is real and, from the mouths of babes, a resolution may be in sight.

Kamryn Gardner, a first-grader at Evening Star Elementary School in Bentonville, Arkansas, was tired of fake pockets on her Old Navy jeans so she wrote the company a letter asking if they would "consider making girls jeans with front pockets that are not fake." According to a Facebook post from April 1, Kamryn's class had been taught "persuasive letter writing" earlier in the year, and so she decided to put her new skills to good use. 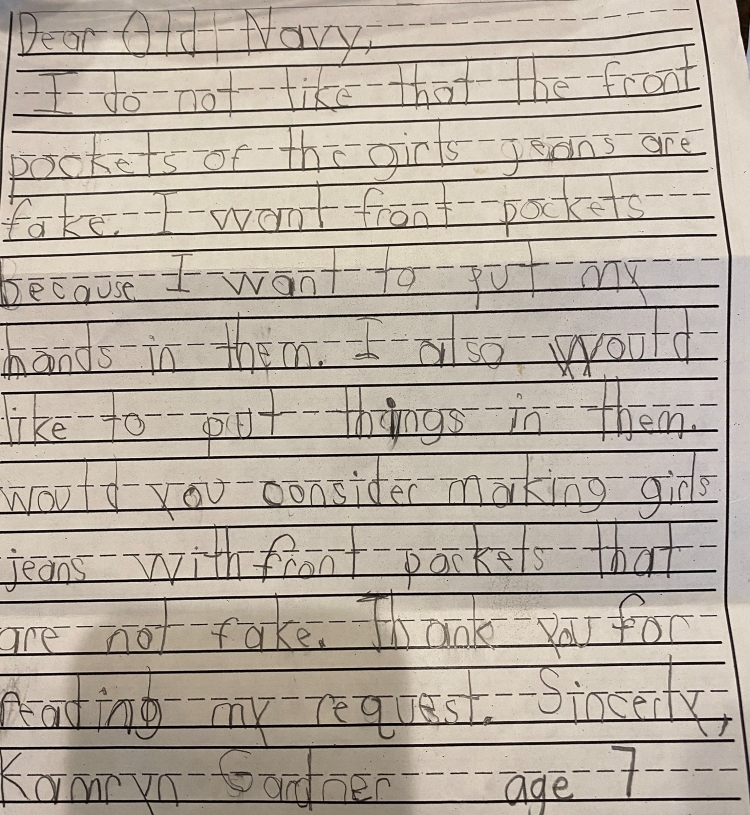 Kamryn elaborated on her request by explaining that she wanted "front pockets because I want to put my hands in them. I also would like to put things in them."  Because, well, they're pockets. To be fair, the women's pants industry does offer pockets, but they're the tiniest of pouches that can fit about two fingertips or maybe a couple of pennies. Of course, getting the two cents out of your pocket is another story. But more often than not, there's simply the illusion of pockets with decorative stitching but nothing actually, pocket-y or useful.

In a slam-dunk customer service move, not only did Old Navy respond with a handwritten card; but also four pairs of jeans and jean shorts for Kamryn. The letter was written and signed by Julie Wood and the Old Navy Kids Team, thanking Kamryn "for taking the time to write us about pockets on girl's jeans." Woods went on to say that "the Old Navy kids product team appreciate your information. It's great feedback for us as we develop new product."

Of course, by "slam-dunk" I mean that Kamryn got the most coveted jeans and shorts with pockets; right now it's unclear if the company plans to roll out such a thing for the public at large. As far as we know, there are only four pairs of pants with pockets made for girls in existence—like a rare and nearly mythical animal only recently discovered in some remote part of the world.

If nothing else, this is a step in the right direction. Perhaps someday soon there will be a wave of jeans, pants, and shorts made for women that have actual honest-to-goodness pockets. However, if you want those pockets now, ladies, you may have to correspond with the retailer yourself; and I have a feeling Old Navy is going to be getting a lot of letters. Who doesn't find pockets useful? Come on, everybody can use good pockets!

How do you feel about pockets? Care to go on the record telling us you have a fondness for fake or ridiculously shallow pockets? Let us know in the comments.

What is a heat island and how does Austin compare to other cities?