ICYMI: Over 1 Million People Are Pretending to Be Ants in Bizarre Facebook Group

ICYMI: Over 1 Million People Are Pretending to Be Ants in Bizarre Facebook Group

"All hail The Queen."

People are doing all sorts of things to pass the time and break free from stress, from howling at the moon to baking bread. But over 1.8 million people pretending to be ants? That's a new one.

Really, there are over 1.8 million people in a Facebook group who log-in every day and pretend to be part of a massive ant colony.

It's one of the simplest concepts out there, with members asking each other to help out with munching, lifting, rolling, and more. The group is called “A group where we pretend to be ants in an ant colony” and has been around since June 26, 2019.

“In this group we are ants. We worship The Queen and do ant stuff. Welcome to the colony.”

There are a few rules that members must stick to; no political or COVID-19 posts, no hate speech or bullying allowed, no gross or violent “contANT” or “antarchy”, and the first letters of the words "The Queen" must be written with a capital letter at all times.

An example of a recent post from the group: 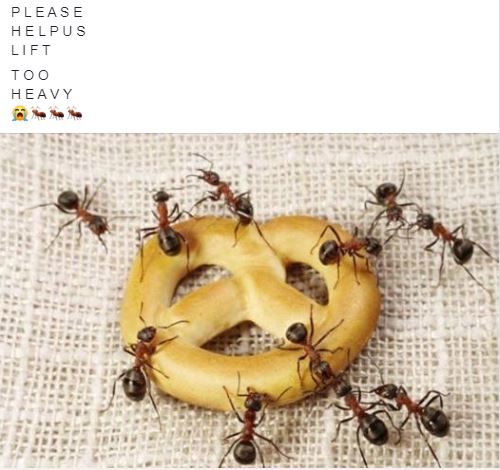 Role-playing groups are not new to Facebook, there are a bunch of them; however, this one, in particular, seems to have taken off as people look for a calming distraction from what's going on in the real world.

The group’s creator is a college student from Fargo, North Dakota. Tyrese Childs has seen membership in the group grow exponentially since March 2020 when people began looking for things to fill their time. And it's kept Childs busy as he works through all the member requests and pending posts with a team of other college-aged admins. There have been so many posts that Childs told NBC it's almost a full-time job for him.

"We have so many user requests and pending posts that this has become a job for me," said Childs. "I think people are searching for something to do right now. You can only scroll so much on social media."

John Kennedy, one of the group's administrators, said he wants to take the online group and make a positive impact in the real world. "I was thinking, 'How do we make this a good thing?'" he said. "I've seen things get really big, and then I see things die very fast."

The group has started selling ant-themed merchandise, donating 50 percent of all proceeds to a nature conservancy.

Role-playing game therapy has been used with children for a long time and has shown to be beneficial in improved spatial reasoning skills, ability to practice social skills and start new friendships, increase empathy towards others, and develop critical and strategic thinking skills, according to Good Therapy.

Sarah Lynne Bowman, an adjunct professor of humanities at Austin Community College in Texas, participates in role-playing games and says, "We are learning right now that the Western ideals of self-sufficiency won't be able to serve us, especially with challenges in a health pandemic and climate change. So, I find it interesting that a whole bunch of people want to be in a group with a hive mind."

Are you part of the ant colony? Share your thoughts in the comments, as well as any other groups like this that we should know about.