Look Before You Sit: A North Carolina Man Retrieved 6th Snake Out of His Toilet

Look Before You Sit: A North Carolina Man Retrieved 6th Snake Out of His Toilet

Toilet snakes might be a common thing in parts of North Carolina, but that kind of thing would never happen in Virginia, right?

When Mike Green, of Cleveland County, North Carolina, recently found a snake in his toilet, it was basically "old hat." The odd and creepy occurrence was Green's sixth toilet snake in four years, BoingBoing reported, and he ended up doing a bit of a tug-of-war with the reptile.

And he isn’t the only resident in the area to find snakes have slithered through the pipes into private bathroom facilities. According to Green, snakes have been coming through the ventilation pipes in his neighborhood’s roofs. “He came out of a tree that was hanging over the pipe,” he told his local news.

But North Carolina isn’t alone in people finding snakes in their toilets. A couple of years ago, a Thailand man discovered a snake in his toilet only after he felt a piercing bite in a very "sensitive area." I honestly cringed when I read that. If you want the gory details of that discovery, read here. Apparently, snakes just follow the rats through the sewers. Um, another cringy thought, yes?

A woman in Kuala Lumpur found a snake in her toilet just last week. Excessive rain might have been the culprit in that incident as the snake was apparently just looking for shelter. And, a year ago, a  six-and-a-half-foot snake was found in a Singapore auto-parts store toilet.

With North Carolina's recent heavy rains due to Florence, it makes you wonder how many more snakes will come popping up the sewer pipes. 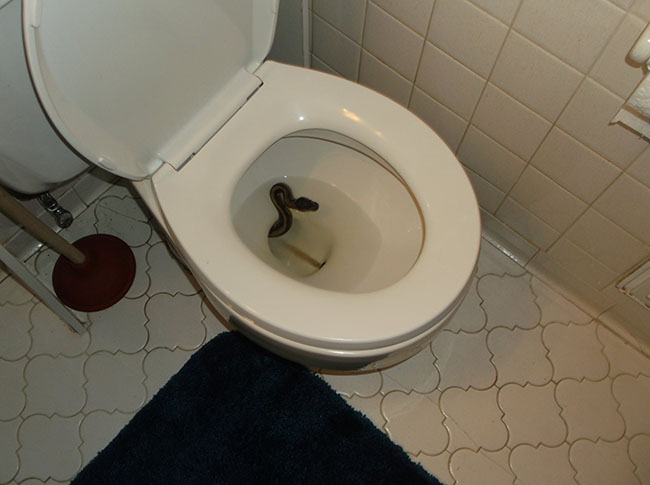 But snakes in toilets could never happen in Virginia—oh really?

A Virginia Beach man, James Hopper, found a black ball python in his toilet this past July, and he and his roommate got it out with a fishing pole before calling Animal Control. Turns out, the snake had gone missing from his owner a couple weeks before, and we're happy to report that the snake and owner have been reunited.

Fortunately, none of these snakes have been venomous; they're just constrictors, which is scary enough, considering where they’ve been discovered.

But whether they’ve come in through the roof-top pipes, sewer systems, or are lost pets of neighbors, I think one bit of advice goes a long way – look before you sit.

Do you know of any snake-in-the-toilet stories or any other creatures coming up through your plumbing? Let us know in the comments below.

Sharks in the streets? The Black Plague? Here are all the hurricane hoaxes we somehow managed to avoid.

You Still Have Time for The Cheesecake Factory Lunch Special. But, Hurry!